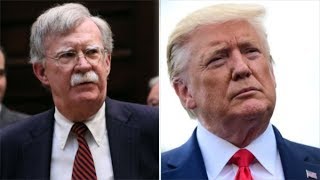 President Trump fired his national security adviser John Bolton Monday morning in an action revealing the deepening crisis of the administration and bitter conflicts within official Washington after a series of foreign policy debacles.

Trump made the announcement on Twitter only minutes after the White House had announced an afternoon press conference for Bolton, Secretary of State Mike Pompeo and Treasury Secretary Steven Mnuchin, where they were to discuss new financial sanctions on "terrorist" groups and their alleged supporters.

The suddenness of the decision and the acrimonious character of Trump's tweets -- as well as Bolton's claim that he had resigned and not been fired -- testify to the intensity of the internal disputes within the White House.

It is clear that longstanding differences between Trump and Bolton came to a head last week over a planned agreement with the Taliban in Afghanistan, which was to be ratified at a secret weekend meeting with Taliban representatives and Afghan President Ashraf Ghani at Camp David.

Trump revealed plans for the meeting only after publicly canceling it, again via Twitter, on Saturday. While the president claimed the cancellation was provoked by a Taliban car bombing that killed a US soldier last Thursday, it is now clear that it was conflict in Washington, not Kabul, that led to the meeting being called off.

The Washington Post reported August 30 that Bolton was being excluded from administration councils on Afghanistan because of his opposition to any deal with the Taliban:

"His opposition to the diplomatic effort in Afghanistan has irritated President Trump, these officials said, and led aides to leave the National Security Council out of sensitive discussions about the agreement...

"Bolton's isolation on Afghanistan became particularly apparent last month when the president's top officials descended on Trump's New Jersey golf resort to discuss the peace deal that would be presented to Afghan and Taliban officials in Kabul and Doha, Qatar, US officials said. In addition to the president, the August 16 meeting included Secretary of Defense Mark T. Esper; Gen. Joseph F. Dunford Jr., the chairman of the Joint Chiefs of Staff; Vice President Pence; Secretary of State Mike Pompeo; CIA Director Gina Haspel; and [chief US negotiator in Afghanistan Zalmay] Khalilzad. Bolton was not originally invited out of concern that his team would oppose the agenda and leak the details later, several officials said."

Media reports after the firing suggested that Bolton was believed to be the source of leaks to the press about the internal divisions over Afghanistan, and that he had particularly angered Trump by suggesting that Vice President Mike Pence was also opposed to the deal with the Taliban. At least one press report last week said Bolton and Secretary of State Pompeo were no longer talking.

Bolton is the Trump administration official most closely identified with a policy of combining military intervention, economic sanctions and diplomatic threats to achieve regime-change in a series of countries long targeted by Washington, including Iran, North Korea and Venezuela. He was one of the most vociferous warmongers in the administration of George W. Bush and remains an adamant defender of the US invasion and occupation of both Afghanistan and Iraq.

According to numerous press reports, Bolton pushed hard for the policy of regime-change in Venezuela on which the Trump administration embarked in January, declaring the little-known Juan Guaido the legitimate president and seeking to instigate a military coup against President Nicolas Maduro. Eight months on, Maduro remains in power and Trump has reportedly lost faith in the effort, which has not brought the quick political victory that Bolton apparently promised.

Trump and Bolton also parted company over Iran policy, as Trump decided, only 10 minutes before the missiles were to be fired, not to launch strikes against Iran after Revolutionary Guard forces shot down an unmanned US drone over Iranian waters in the Persian Gulf. Bolton was also reportedly opposed to Trump's decision to meet with North Korean leader Kim Jong-un in the Demilitarized Zone between North and South Korea on June 30, where Trump took a symbolic step across the border into North Korean territory.

The firing of Bolton is in no sense a turn by Trump away from the use of military force to achieve his foreign policy goals. It is only a month since Trump mused that he could win victory in Afghanistan in a matter of days if he were willing to kill 10 million people -- an indication of the types of discussions being held in the White House.

The initial Democratic Party response to Bolton's firing was focused largely on concerns that the evident disarray in the White House might do damage to the interests of American imperialism around the world. The instability of the Trump administration is reflected in its turnover, with three national security advisers, two secretaries of state, three secretaries of defense and acting chiefs in a half dozen top positions.

Patrick Martin writes for the World Socialist Website (wsws.org), a forum for socialist ideas & analysis & published by the International Committee of the Fourth International (ICFI).
Related Topic(s): National Security Advisor; Trump And Bolton; Trump Anger, Add Tags
Add to My Group(s)
Go To Commenting
The views expressed herein are the sole responsibility of the author and do not necessarily reflect those of this website or its editors.