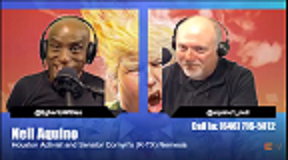 Today, on the Martin Luther King Holiday, I was doing a show with renown Houston Progressive activist Neil Aquino when in the middle of the show two callers performed two orchestrated calls to "remind me" that I was black using derogatory terms. They likely did not get the reaction they expected.

When I started blogging I was incognito for the first few years. I used a pseudonym. I made sure I was known as a blogger and not a black blogger relegated to discussing only black or Latino issues. I rarely discussed racial issues then.

Race is at the center of many issues today given the sexist xenophobic misogynist homophobic racist we have as president. Even as most of the issues I blog about are on economic and social justice, every so often I touch on race.

A few conservative listeners continue to tell me that it is a disservice when I bring up racial issues because for all practical purposes there is no racism in America. Of course, one must be willfully blind to accept that false tenet.

I gave the two racist clowns who called Politics Done Right some air time not for my benefit but for the benefit of those who sit back in their bubble thinking those who harbor these ideas are not among them.

Calling me offensive and derogatory racist names have zero influence on me. In fact, I generally feel a sense of pity for those who knowingly or not need to attempt to pull down someone for them to have a semblance of worth. The pent up pain must be unbearable.

I wish others could take the stance that I took. Before we give importance to any word, we should consider the source. We can make the Trump Effect in certain instances moot. Our reactions to words either give them value or render them worthless.

Egberto Willies is a political activist, author, political blogger, radio show host, business owner, software developer, web designer, and mechanical engineer in Kingwood, TX. Egberto is an ardent Liberal that believes tolerance is essential. His favorite phrase is "political involvement should be a requirement for citizenship". He believes that we must get away from the current policies that reward those who simply move money/capital and produce nothing tangible for our society. If a change in policy does not occur, America will be no different than many oligarchic societies where a few are able to accumulate wealth while (more...)
Related Topic(s): N-word, Add Tags
Add to My Group(s)
Go To Commenting
The views expressed herein are the sole responsibility of the author and do not necessarily reflect those of this website or its editors.