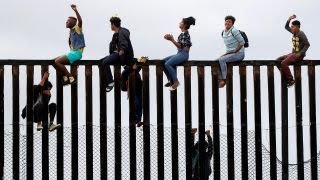 The 300 asylum seekers who arrived at the US border on April 29 after a month-long, 2,000-mile journey have another grueling struggle ahead of them, according to the immigration attorneys who are donating their time to represent them.

More than three-quarters of asylum claims from Hondurans, Guatemalans and Salvadorans between 2012 and 2017 were denied, according to the Transactional Records Access Clearinghouse at Syracuse University, and this year's caravan of asylum seekers are facing a climate made even more hostile by the xenophobic Trump administration.

Once the asylum applicants -- who traveled in a caravan to the Tijuana-San Ysidro border from Honduras, El Salvador and Guatemala -- establish that they face a credible fear of persecution in their home countries, their ordeals are just beginning.

Los Angeles immigration attorney Colleen Flynn told Truthout that because of retaliation by the Trump administration, even those who establish "credible fear" could face years of detention.

"Some will bond out, but many others will be unable to raise the money for high bonds," Flynn said. "There is a possibility their kids will be taken away."

In the face of these fears, Flynn said, the asylum seekers she met in Tijuana are "incredibly resilient, incredibly hopeful, really brave."

Hundreds of supporters, many of whom had marched 150 miles from Los Angeles, gathered on the US side of the border in solidarity with the asylum seekers. It was "a really moving sight to see people coming together at the border," said Kath Rogers, executive director of the National Lawyers Guild's Los Angeles chapter.

When the asylum seekers arrived at the border, however, US Customs and Border Protection (CBP) officers informed them that the port of entry was "at capacity" and repeated that mantra throughout the day. When Gilbert Saucedo, an attorney, human rights advocate and co-president of the LA chapter of the National Lawyers Guild, asked the CBP officers, "Is that what you were told to say?" they said "yes," Saucedo reported to Truthout.

Pueblo Sin Fronteras, a group that has accompanied migrants and refugees on their journeys for 15 years, took issue with the officers, saying in a statement: "Customs and Border Protection is the largest law enforcement agency in the country, and is able to detain, transport and incarcerate thousands of people in a day, but is pretending that they don't have the 'capacity' to accept 150 refugee parents and children whose arrival has been anticipated and communicated weeks in advance."

The asylum seekers have a legal right to have their applications considered, and many of them have meritorious claims. Notwithstanding Trump's bloviating, CBP officers began slowly processing the asylum requests. By the end of the fifth day, roughly half of the caravan asylum seekers had been taken to San Diego for processing.

Meanwhile, the remaining asylum seekers continue to wait. They are camping on the ground in unseasonably cool and drizzly weather. Mostly women and children, they are cold and hungry, despite some rations provided by their supporters.

"It just broke my heart to see them," Saucedo said.

Flynn spoke of a group of women whose lives are endangered in their home countries because they are transgender. These women "really kept spirits up" among the asylum seekers, "singing, dancing, elevating the mood and keeping people's hopes alive."

Trump Administration Tries to Keep Asylum Seekers Out of US

Related Topic(s): Asylum; Immigrants; Migrant Children; Refugees; Rights; Transgender, Add Tags
Add to My Group(s)
Go To Commenting
The views expressed herein are the sole responsibility of the author and do not necessarily reflect those of this website or its editors.