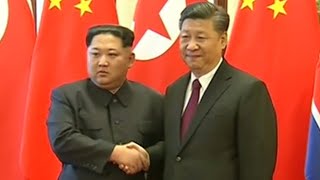 Donald Trump thinks his "maximum pressure" campaign persuaded North Korea to abandon its nuclear weapons program. But it's a bunch of baloney. The reason Kim Jong-un is planning to denuclearize is because China adamantly opposes nuclear weapons on the peninsula. That's the whole deal in a nutshell. China, who is North Korea's biggest trading partner, gave Kim an ultimatum: Ditch the nukes or face long-term economic strangulation. Kim very wisely chose the former option, which is to say, he backed down.

The situation in North Korea is really quite bleak. Consider, for example, this recent piece in a United Nations periodical titled "The 5 most under-reported humanitarian crises that are happening right now". Heading the list is this blurb on North Korea:

"...what has been drastically underreported in the last year is that unprecedented number of people who are going hungry. The UN estimates that 70 percent of the population, or 18 million people, are food-insecure and reliant on government aid. To make things worse, last year North Korea experienced its worst drought in 16 years, exacerbating an already dire food shortage. With tight control of its borders keeping out aid organizations and journalists, it's almost impossible to capture how many are actually receiving the urgent food aid they need." (U.N. Dispatch)

Unfortunately, famine and drought are just the tip of the iceberg. The economic sanctions have added a whole new layer to the North's misery, in fact, they have brought the economy to its knees. Pyongyang might have been able to muddle through had Beijing not joined the international blockade, but once China agreed to participate, the North's fate was sealed. In the last year, the DPRK's currency has dropped precipitously, the country's import-export trade has been slashed by half, and the battered economy has plunged into a deep slump. The problem is almost entirely attributable to China's tightening sanctions regime, which has effectively cut off the flow of capital and vital resources to the North. In order to grasp how overly dependent the DPRK is on China, take a look at this:

"In February 2017, China restricted all coal imports from North Korea until 2018. This is considered to be extremely harmful to the North Korean economy, as coal was the top export of the nation, and China was their top trading partner.

"On 28 September 2017... China ordered all North Korean companies operating in China to cease operations within 120 days. By January 2018 customs statistics showed that trade between the two countries had fallen to the lowest level recorded.

"On 21 February 2016 China quietly ended financial support of North Korea without any media publicity. It is reported to be due to the fallout of relations between the two governments..."(Wikipedia)

2. China shut down all the DPRK's companies operating in China. (terminating the recycling of revenues back to the North.)

4. China stopped providing any financial support for the North.

Related Topic(s): China Politics; Confrontation; Korea; Nukes; Sanctions; Trump Ego, Add Tags
Add to My Group(s)
Go To Commenting
The views expressed herein are the sole responsibility of the author and do not necessarily reflect those of this website or its editors.