It is a well-known fact of history that to the victor belongs the spoils.

And one of those spoils is the ability to reshape history. Donald Trump has won the presidency. He is now busy reshaping history.

On Wednesday, President Trump met with Palestinian President Mahmoud Abbas at the White House. The usual "we want peace" talking points were exchanged. The word "justice" was not included.

Since that would be both inhumane to the prisoners and politically devastating to President Abbas, he most certainly would have brushed aside such an idea.

President Trump began his cordial welcoming words to President Abbas with one of those blatant distortions of history that good staff work might have avoided. Unless, that is, the distortion was deliberate.

This is the way President Trump welcomed President Mahmoud Abbas to the White House: "Almost 24 years ago, it was on these grounds that President Abbas stood with a courageous peacemaker, then-Israeli Prime Minister Yitzhak Rabin. Here at the White House, President Abbas signed a Declaration of Principles -- very important -- which laid the foundation for peace between the Israelis and Palestinians." 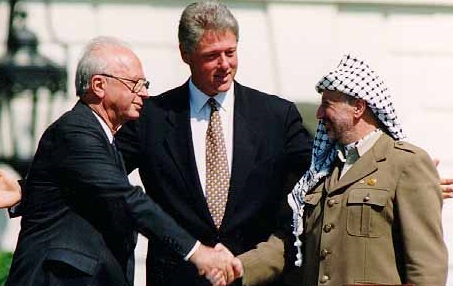 Not content with this shading of truth, Trump sought to link the Oslo Accords to what he believes could be his own Trumpian contribution to history:

There is a problem with this recall of history. It writes former Palestinian President Yasar Arafat out of a major moment of history.

Abbas was, indeed, a member of the Palestinian delegation which traveled to the White House for the historic September, 1993, signing ceremony.

Abbas was certainly in the Palestinian delegation headed by then-PLO leader Yasar Arafat. He most certainly did not sign with "a courageous peacemaker, then-Israeli Prime Minister Yitzhak Rabin".

And, he did not stand with Yitzhak Rabin. That would be Yasar Arafat, as the historic picture (above), clearly demonstrates.

Rabin did not sign the statement. Arafat did not sign it. They had representatives to do the signing for them.

Related Topic(s): Israel; Yasser Arafat; Yitzhak Rabin, Add Tags
Add to My Group(s)
Go To Commenting
The views expressed herein are the sole responsibility of the author and do not necessarily reflect those of this website or its editors.