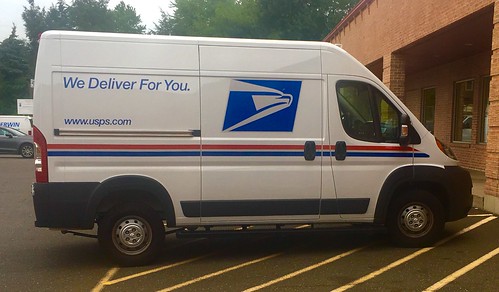 The idiot in chief, POSPOTUS Trump is on a vendetta against the US Postal Service, demanding that it increase package shipping rates four times.

The word is that he's doing it to hurt Jeff Bezos' Amazon, because Bezos owns the Washington Post, which frequently criticizes Trump. Vanity Fair reports, Trump's Vendetta Against Jeff Bezos Could Destroy the Postal Service.

Trump claims that the postal service is losing money on Amazon package delivery. The truth is, package delivery is profitable for the Postal Service. Trump's claim is bogus. Also, Amazon has been creating its own alternative package delivery system. I know that I saw private Amazon delivery vans just about every day when I lived just outside of Philly, in an apartment building. And I've watched as Amazon has set up pick up and return drop-off kiosks at local convenience stores and retail stores throughout my area.

That could be very profitable. If Amazon takes it over, it could shift non-union workers and third party vendors to fill the roles postal employees pay. They could flesh out the kiosks and retail locations Amazon has already been using. Without the need to pay pensions and union wages, Amazon could find the postal business to be very profitable. And it would probably cut the costs of Amazon's deliveries. For all we know, Amazon might even offer special postal rates to Amazon Prime members.

If Trump follows through on his efforts to destroy the US Postal Service, the final joke could be on him Bezos could end up taking over a business that did over $71 billion in business last year. Amazon did about $280 billion last year.

Costs for fulfillment and shipping last year were $61.7 billion. I would expect that Amazon would not only make a profit on its take-over of the US Postal systems market, but that it would also significantly decrease Amazon's already existing shipping and fulfillment costs. Trump's revenge would probably be a gift worth at least $20 billion a year to Amazon and Bezos.

My guess is that Bezos and Amazon would probably do a pretty good job at replacing the Postal Service. I am NOT supporting this idea. But Bezos has been brilliant at dealing with shipping and fulfillment. So he would probably make the service even more reliable, though not necessarily as friendly to employees or customers.

It's almost worth seeing Trump kill the post office to see how his action bites back. But I don't think it'll go that far. Trump may not see this article, but eventually, someone will point out to him the huge favor he'll be doing Bezos.

Related Topic(s): Amazon; Jeff Bezos; Postal Service; Trump, Add Tags
Add to My Group(s)
Go To Commenting
The views expressed herein are the sole responsibility of the author and do not necessarily reflect those of this website or its editors.