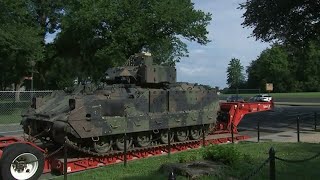 President Trump is marshalling tanks, bombers and other machinery of war for a Fourth of July celebration
(Image by YouTube, Channel: Associated Press)   Details   DMCA

This year's Fourth of July celebration on the National Mall in Washington, DC has become a stop on the Trump for President re-election campaign trail. His "Salute to America" has become a "Salute to Donald Trump." He has called the events the "show of a lifetime!" and an unprecedented celebration of American military strength.

Presidents have traditionally stayed away from July 4 celebrations out of concern that it would politicize independence day. The last time there was a similar attempt at a Presidential take-over of the Fourth of July was 50 years ago in 1970 when President Nixon, appearing by video from the White House, wanted a huge display for support for the Vietnam War. However, the Mall ending up being filled with anti-war protesters whose presence symbolized the outrage at the war on Vietnam.

The last time a president took part in a July 4 program in Washington DC was in 1987 and the last time military tanks were seen on DC streets was 27 years ago during the 1991 Gulf War parade.

Trump's militarized Mall has the feeling of Red Square and Pyongyang and France's Bastille Day which Trump seems to be trying to replicate his trip to Paris two summers ago. The "supreme leader" wannabe of the United States will preside over jet fly-overs, including one from the Air Force One fleet, and tanks, admittedly, not many of them because the crumbling roads of the nation's capital cannot withstand the weight of the huge military equipment.

Joining the Air Force One plane will be Blue Angels, an F-35 jet from the Navy, at least one aircraft from Marine Helicopter Squadron One, a B-2 stealth bomber, and F-22 Raptor fighter jets. Commercial air traffic into National Airport will be disrupted for three hours as Trump smiles triumphantly from the steps of the Lincoln Memorial.

Trump's decision to capture the Fourth of July for his personal use and the huge expense that U.S.military, National Park Service and the City of Washington is incurring, no doubt is causing great heartburn in career government employees in the Pentagon, State Department and probably even in the White House, as well as from the general public. Pentagon officers refuse to provide information on the costs of the planes, tanks and other military equipment and are "hiding out and hoping it all blows over."

US Congressional Representative Elijah Cummings tweeted that: "President Trump is willing to spend millions of taxpayer dollars and accept donations of fireworks for his partisan Fourth of July celebration while his Administration is turning away donations of diapers and toothpaste for immigrant children."

Presidential candidate Marianne Williamson reflected the sentiments of many people throughout the country when she tweeted: "Watching army tanks being hauled through DC for Trump's July 4 celebration is heartbreaking & repugnant."

Despite complaints from Congresspersons, the DC city council and civil society, the military dominated Fourth of July will go forward. However, 12 years ago, during the Bush administration's wars on Iraq and Afghanistan, citizen activism forced the Bush administration to end its military equipment display on the Mall that would take place every year on Mother's Day, a day that was created as a call by mothers to end all wars. For five years, CODEPINK: Women for Peace organized demonstrations against the having military equipment on the National Mall. CODEPINKers climbed onto and into tanks and unfurled Stop the Wars and peace flags. We sang peace songs and gave away peace buttons while the military was giving away foam grenades as gifts. Finally, after five years, the military ended their equipment displays on the Mall on Mother's Day.

This year, CODEPINK is challenging Trump and his policies by flying the internationally famous Trump Baby Balloon on the National Mall on July 4, and having a "Trump is a Big Baby Festival." The 20-foot balloon that features Trump in a diaper and with a cellphone for his tweets is an apt symbol for a president who is so erratic, self-centered, prone to tantrums, and doesn't care about the consequences of his actions. If Trump tries to do this antic again next year -- politicizing and militarizing our national holiday -- we better have more than a big balloon to greet him.

Related Topic(s): Anti-war; CODEPINK; July The Fourth; Protest; Trump Parade, Add Tags
Add to My Group(s)
Go To Commenting
The views expressed herein are the sole responsibility of the author and do not necessarily reflect those of this website or its editors.