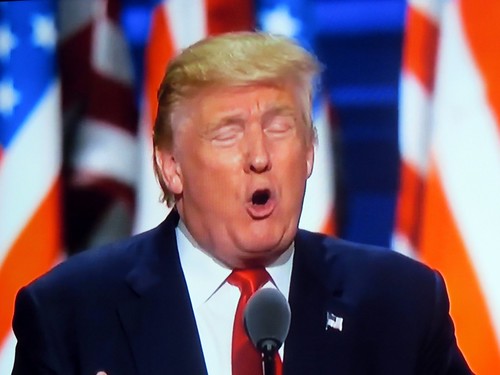 The Dumbing Down of America is complete.
(Image by kennethkonica)   Details   DMCA
The Trump presidency is in shambles and hanging on to life support. There are people in the streets like never before, and it doesn't matter what the mainstream media has to say about it, this is a good thing. If a Democrat was in office, people would not be as vigilant as they are now. There is so much that Barack Obama got away with that Donald Trump simply can't. Maybe it wasn't "good form" to criticize Barack Obama (after all he was the first black president and he was so-called "progressive" Democrat (which of course, he turned out not to be at all), and it seems like the American people gave him a pass on just about everything he did

Obama deported more people than any prior president, and jailed more whistleblowers that any prior president. He also signed the continuation of the "patriot act" & NDAA which authorized military to effectively act as the police force (which negated posse comitatus which explicitly bans this under the U.S. Constitution) and detain American citizens without a warrant and without a right to a lawyer under a military tribunal. Oh yes..he also had a meeting every Tuesday to determine who were going to die in drone strikes that week.

If Donald Trump did the exact same thing today, the streets would be filled with protesters. I believe that to be a good thing. In some small way, I was glad to see Donald Trump win the presidency because I knew that people in this country would finally pay attention to how their civil liberties were being eroded, even by their so-called "democratic" friends.

Today, we are seeing people fighting back against the deportations, the oil pipelines, and the right of women to have a say over what happens to their own bodies. The people have marches and protests and civil disobedience that seem to get larger by the day. People are becoming aware and learning how to fight back and show the government that the government works to the people and not the other way around. If the government can't do the people's will, then it is incumbent upon the people to change that government. That is what is written in the Declaration of Independence.

The Democrats seem to want to blame everything on the Russians. Reading and watching the mainstream a media is sickening. It's all about how in Russia did this and that, without any proof or any shred of evidence. It's a pure propaganda. This is not what the Americans need to be focused on. The American people need to be focused on protecting the people that live in America, no matter what color or religion they are, and making sure that people can feed their children and to protect our resources. People should also be aware that 11 million undocumented people should not and could not be deported. The expense deporting 11 million people would be beyond the ability of the budget absorb. This is a total fantasy and people need to demand that Pres. Trump knock it off.

Deporting undocumented people, banning Muslims, and appealing to the Alt-right, is not something that the American people will go along with. Bigotry and treating people like second-class citizens will not be tolerated. This is something that Donald Trump needs to understand. It might get him elected president against a failed Democratic candidate, but it will not let him keep the presidency because the American people will vote with their feet against these policies. Unless Trump wants to see millions of Americans this summer gathering in Washington DC, he needs to get his act together. He must understand that this is not a corporation that he owns" and that we will not bend to his will because he doesn't pay our wages or provide for our families. The American people don't need Donald Trump. Trump needs the American people. The people in his administration need to pay attention to what is happening in the streets. They ignore it her own risk, and when push comes to shove" they will lose.

Related Topic(s): America Freedom To Fascism; Obama; People; Protester; Trump Protesters; Women, Add Tags
Add to My Group(s)
Go To Commenting
The views expressed herein are the sole responsibility of the author and do not necessarily reflect those of this website or its editors.