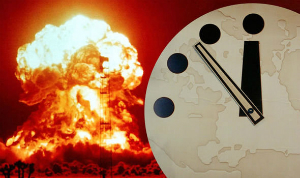 Will we have a NUCLEAR WAR?
(Image by catholic.org)   Details   DMCA

Four weeks into Donald Trump's presidency, New York Times columnist Paul Krugman wrote that "nothing he has done since the inauguration allays fears that he is in effect a Putin puppet." The liberal pundit concluded with a matter-of-fact reference to "the Trump-Putin axis."

Such lines of attack have become routine, citing and stoking fears that the president of the United States is a Kremlin stooge. The meme is on the march -- and where it will end, nobody knows.

Actually, it could end with a global nuclear holocaust.

The incessant goading and denunciations of Trump as a Kremlin flunky are escalating massive pressure on him to prove otherwise. Exculpatory behavior would involve setting aside possibilities for detente and, instead, confronting Russia -- rhetorically and militarily.

Hostile behavior toward Russia is what much of the U.S. media and political establishment have been fervently seeking. It's also the kind of behavior that could drag us all over the brink into thermonuclear destruction.

But c'mon, why worry about that?

For countless media commentators and partisan Democrats including many avowed progressives -- as well as for some Republican hawks aligned with the likes of Sens. John McCain and Lindsey Graham -- the benefits of tarring Trump as a Russian tool are just too alluring to resist.

To be clear: For a vast number of reasons, the Trump administration is repugnant. And the new president's flagrant violations of the U.S. Constitution's foreign and domestic emoluments clauses are solid grounds for impeaching him. I'm glad to be involved with a nationwide petition campaign -- which already has 890,000 signers -- urging Congress to begin impeachment proceedings. We should go after Trump for well-grounded reasons based on solid facts.

At the same time, we should refuse to be stampeded by the nonstop drumbeats from partisan talking points and mainline media outlets -- as well as "the intelligence community." It wasn't mere happenstance when the Director of National Intelligence, James Clapper, openly lied at a Senate committee hearing in early 2013, replying "No sir" to a pivotal question from Sen. Ron Wyden: "Does the NSA collect any type of data at all on millions or hundreds of millions of Americans?" The lie was exposed three months later when Edward Snowden made possible the release of key NSA documents.

Yet now we're supposed to assume straight-arrow authoritative honesty can be found in a flimsy 25-page report "assessing Russian activities and intentions," issued in early January under the logo of Clapper's Office of the Director of National Intelligence. That report has been critiqued and demolished by one astute analyst after another.

As investigative journalist Gareth Porter noted, "In fact, the intelligence community had not even obtained evidence that Russia was behind the publication by WikiLeaks of the e-mails [of the] Democratic National Committee, much less that it had done so with the intention of electing Trump. Clapper had testified before Congress in mid-November and again in December that the intelligence community did not know who had provided the e-mails to WikiLeaks and when they were provided."

More broadly and profoundly, many cogent analyses have emerged to assess the proliferating anti-Russia meme and its poisonous effects. For instance: "Why We Must Oppose the Kremlin-Baiting Against Trump" by Stephen F. Cohen at The Nation; "The Increasingly Unhinged Russia Rhetoric Comes From a Long-Standing U.S. Playbook" by Glenn Greenwald at The Intercept; and "The Did-You-Talk-to-Russians Witch Hunt" by Robert Parry at ConsortiumNews.

The frenzy to vilify Russia and put the kibosh on the potential for detente is now undermining open democratic discourse about U.S. foreign policy -- while defaming advocates of better U.S.-Russia relations in ways that would have made Joe McCarthy proud. So, President Trump's expressions of interest in improving relations with Russia -- among his few lucid and constructive statements about anything -- are routinely spun and smeared as corroborations of the meme that he's in cahoots with the Russian government.

Many organizations that call themselves progressive are culpable. One of the largest, MoveOn, blasted out an email alert on February 10 with a one-sentence petition calling for a congressional investigation of Trump -- flatly declaring that he has "ties to the Russian government."

Related Topic(s): Nuclear War; Trump Presidency; Vladimir Putin; World War III, Add Tags
Add to My Group(s)
Go To Commenting
The views expressed herein are the sole responsibility of the author and do not necessarily reflect those of this website or its editors.