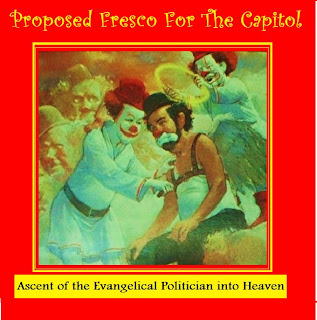 A recent poll has shown Donald Trump only slightly behind Mike Huckabee in approval for the Republican Nomination in 2012. That's right, "The Donald" has come on surprisingly strong. Huckabee's reaction?

HUCKABEE: Well, I had a wonderful meeting with Donald Trump. I think he's a very serious contender. He's going to get in. I kind of went into the meeting thinking he's not really going to run. Came out thinking, by gosh, he really is. [...]

INGRAHAM: Could there be a possible Huckabee/Trump ticket in the offing here?

HUCKABEE: Never say never. I don't know. But, whether Donald Trump would ever want to be seen on the same stage with me, I don't know. But I found him very engaging, and a very smart guy. And I think people will dismiss him at their own peril."

The Clowns of God

In 1981, Morris West (Shoes of the Fisherman) wrote a book titled The Clowns of God. And while it centered around the politics of the Roman Catholic curia during the height of the Cold War, its premise of religion and politics was prescient: never before have we had religion breathing harder down the necks of politicians (and voters) than now - the height of the Culture War. But while West's portrayal of cardinals as a bunch of madcap, wild clowns was meant to be broadly metaphorical, our current crop of  Republican/Tea Party Presidential hopefuls look more like circus clowns than the red-robed kind.

The ticket of Trump/Huckabee or Huckabee/Trump (whichever one you believe) certainly makes that point. The very possibility of a campaign duo comprised of a former governor/minister and a real estate mogul/media personality conjures up all sorts of images, the least of which is having them lead the other hopefuls out of a bright yellow mini VW bug. Taking anything seriously from them would take an astounding  feat of composure, like trying not to laugh while being cruelly tickled to death. Looked at as a whole, they are more like "Killer Clowns From Outer Space."

Yes, it's unfortunate that we have to take any of them seriously, but the horror of today's religio-political scene is that we must . Why? Simply because other people WILL. And those people vote. The spectrum of clowns is much greater than it was in 2008, going from a former congressman who holds the record for the most charges of ethics violations (84) to a governor who has a hard time explaining his association with a white supremacist group. But as the video of Donald Trump's interview on Pat Robertson's Christian Broadcasting Network proves, they all have to have some semblance of religiosity in order to please the Christian Right with its hunger for all ideologies "Christian."

Let's take a look at the Presidential hopefuls in terms of background, policies and religiosity.*

Former Governor of Arkansas (trying to undo what Clinton had done to the state).

Wanted to quarantine people with AIDS at a time when casual contract as transmission had been medically debunked for years.

Idolater of Christian "historian" David Barton to the point of saying that everyone should listen to him at gunpoint.

News analyst for FOX News (a rather oxymoronic position)

Famous for having to "re-frame" positions or outright flip-flopping

Celebrity/personality synonymous with the term "You're Fired!"

Considers himself a Christian and is Presbyterian, Catholic or something else depending upon the date of the biography.

Darling of the "common man" and Tea Party

Founder of the "Pink Elephant" Movement, helping Conservative women to get elected

Baptized Roman Catholic, became a Pentecostal and was prayed over by Thomas Muthee, leading African preacher/witch-hunter

A contributor to FOX News

U.S. Representative for the 6th Congressional District in the State of Minnesota

Supporter of the Tea Party

Famous for the quotes "armed and dangerous" and "slit our wrists"

Owner of a Christian Counseling Clinic

Member of the Wisconsin Lutheran Synod

Ardent opponent of gay rights, same-sex marriage, and obsessive about priests and pedophilia

Firm believer that the Crusades weren't all that bad***

Head of a very Catholic family, and became a Knight of Magistral Grace of the The Knights of Malta

Mormon (so, as seen by many in the Christian Right, Romney belongs to a "cult")

Flip-flopper on a number of issues including stem cell research, abortion and some gay rights issues, veering to the Right during his tenure in office as governor.

Record-holder of the most ethics charges against any Congressman (84) and the only Speaker of the House to be disciplined for ethhics violations (at a cost to Gingrich of $300,000)

Convert to Catholicism from the Baptist denomination

Dinosaur enthusiast (does not touch the subject of evolution)

Serial adulterer who explained that his "love for his country" made him work too hard and as a result "things happened in my life that were not appropriate."

Influential lobbyist for firms like R.J. Reynolds and Microsoft

Most notable quote about eliminating the subject of slavery from Confederate History Month: "... it's trying to make a big deal out of something doesn't amount to diddly"

Add more clowns to the rostrum and the Republican Presidential hopeful lineup may rival anything Ringling Bros. has ever produced. 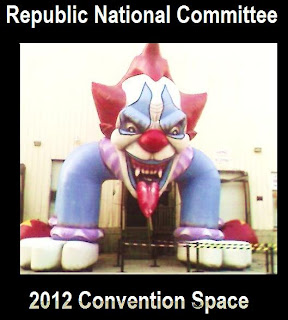 Seriously, progressives should be praying for more clowns to weaken the Right and its chances of gaining the Executive Branch of government. A recent poll by Polling for Public Policy indicates that 3 months into the "new" Congress people are already dropping away from Republicans at an alarming rate: things like budget cuts at national and state level and open contempt for unions have not endeared voters to the GOP:

Voters may not love Obama as once they did but they're finding him to be more reasonable than the alternative and that means it will be hard for the GOP to knock him off next year without a top notch nominee.

So, send in the Clowns of God. With the way things are going in the country, we need laughter to help us through all the self-righteousness and hypocrisy that last November has enabled.

* Yes, I realize this is totally arbitrary on my part, but it's rather difficult to rate politicians on their supposed thoughts as opposed to their deeds.

*** This prompted us to respond with a Christian Crime Line

Rev. Dan Vojir is has been writing/blogging on religion and politics for the better part of ten years. A former radio talk show host (Strictly Books " Talk America Radio Network) and book publisher, Dan has connected with some of the most (more...)
Related Topic(s): Bachmann-Michele; Barbour-Haley; Clowns Of God; Donald Trump; Gingrich Newt; Mike Huckabee; Mitt Romney; Santorum Rick; Sarah Palin, Add Tags
Add to My Group(s)
Go To Commenting
The views expressed herein are the sole responsibility of the author and do not necessarily reflect those of this website or its editors.