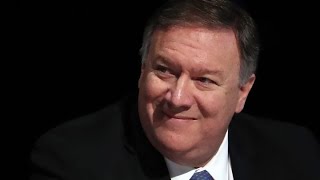 US Secretary of State Mike Pompeo this week announced yet another radical shift in Washington's policy towards the Israeli-Palestinian conflict, by way of saying that the United States "was accepting realities on the ground."

What the mendacious and cynical Pompeo omits to add is that the Trump administration has been dramatically fueling the change in "realities" specifically the expansion of illegal Israeli settlements on Palestinian territory and the demolition of Palestinian homes.

The move overturns more than four decades of official US policy which adhered to the UN-backed position of condemning Israeli occupation in the Palestinian West Bank and in East Jerusalem as illegal and a violation of the Geneva Convention.

Since the 1967 Six War, successive Israeli governments have overseen a relentless process of annexing Palestinian territory. Over that period, Palestinian lands have diminished and become increasingly fragmented with little contiguity that would be normal for a future state. There are estimated to be around 200 Israeli new-build settlements of towns and villages with a population of 600,000 Jewish settlers who have usurped Palestinian land and properties. The UN has repeatedly condemned the annexation and occupation as illegal, to no avail.

The latest move by the Trump administration is a flagrant repudiation of UN resolutions and international law. It follows previous declarations by President Trump recognizing Israeli claims to Jerusalem as its capital, as well as Israel's annexation of Syrian territory in the Golan Heights.

"Calling the establishment of civilian settlements inconsistent with international law has not advanced the cause of peace," said Pompeo on Monday. "The hard truth is that there will never be a judicial resolution to the conflict, and arguments about who is right and who is wrong as a matter of international law will not bring peace."

That is an astounding dereliction of international law by the American government. The "hard truth" that Pompeo ignores is that US administrations have constantly undermined "judicial resolution of the conflict" because they have, to varying degrees, over the decades pandered to Israeli criminal occupation of Palestinian lands.

What the Trump administration is doing is not entirely unprecedented. Successive American presidents have merely paid lip service to a supposed peace process between Israelis and Palestinians, declaring their support for a "two-state solution" and presenting Washington as some kind of "honest broker." The reality is that Washington has consistently undermined Palestinian national rights by its systematic bias towards Israel, indulging the latter's criminal policies of occupation and military aggression towards Palestinian population.

However, Trump and his coterie of Middle East aides have taken the American bias and complicity with Israel to naked levels. Part of that is no doubt payback for the multi-million-dollar funding of Trump's 2016 election campaign by Jewish-American billionaire and arch-Zionist Sheldon Adelson.

Israeli peace groups have recorded a surge in Israeli expansion of settlements across the West Bank and East Jerusalem over the past three years of the Trump administration. Demolition of Palestinian homes by Israeli bulldozers are at a record high.

There is an imperative business reason for this. President Donald Trump has personally invested in Israeli settlements, as have his ambassador to Israel David Friedman, and the White House's special envoy to the region, Jared Kushner, Trump's son-in-law.

One of those settlements is at Beit El which is described as "one of the most aggressive" in terms of expansionist scope. It overlooks the Palestinian city of Ramallah in the West Bank which is supposed to be the administrative seat of the Palestinian Authority.

Trump, Friedman and the Kushner family have in the past funneled millions of dollars into Beit El and other Israeli settlements. In return, Israeli financial companies have made huge investments in Jared Kushner's family real-estate business back in the US. For example, Menora Mivtachim, a pension and insurance firm, invested $30 million in apartments in Maryland owned by the Kushner family.

Related Topic(s): Israeli American Relations; Israeli Fascism; Israeli Settlements; Jerusalem; Secretary Of State Mike Pompeo; Trump Finances, Add Tags
Add to My Group(s)
Go To Commenting
The views expressed herein are the sole responsibility of the author and do not necessarily reflect those of this website or its editors.