The president's speech was a mangled mess of lies and fearmongering that further discredited his shutdown gambit. 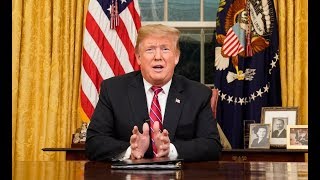 The only thing that Donald Trump's first speech to the nation from the Oval Office proved is that Trump is no good at making speeches to the nation from the Oval Office. The president failed on Tuesday evening to deliver an even minimally credible case to support his claim that there is "a growing humanitarian and security crisis at our southern border." Nothing that he said in a rambling eight-minute recitation of talking points and applause lines from campaign rallies could justify his use of emergency powers to build an unnecessary and unworkable border wall.

These are the vital takeaways from Trump's speech, as the president and his aides have in recent days been suggesting that he might declare a national emergency as part of a scheme to "secure the border."

Presidents have limited authority to declare national emergencies when there are crises so severe that immediate action is necessary. But presidents cannot abuse this authority; they must operate within boundaries established by judicial precedent and the 1976 National Emergencies Act.

These actual facts must frame the debate about this president's fact-free assertion that he might invoke emergency powers to justify the expenditure of billions of dollars to build a border wall that has not been authorized by Congress. And they create the context in which Tuesday's speech must be assessed.

Every president is duty-bound to make a compelling case for the use of emergency powers. That was what made Trump's extraordinary address to the nation Tuesday evening such a big deal.

And such a disaster for his crumbling presidency.

Trump wanted to portray his border-security agenda as "just common sense." But there was nothing sensible about the squinting president's attempt to read from the "how-much-more-American-blood-must-we-shed" script that his fear-mongering speechwriters had crafted.

Claiming that he was determined to end a "cycle of human suffering," Trump offered up a stew of outright lies and false premises. He tried to suggest that he sympathized with immigrants, while at the same time portraying them as violent criminals. He repeated his absurd promise that Mexico will pay for the wall, with the footnote that this will now happen "indirectly." He asserted that immigrants take jobs from American workers, at a time when American employers say they struggle to fill positions. He tried to blame congressional Democrats for a government shutdown, after telling Chuck Schumer and Nancy Pelosi less than a month ago that "I will take the mantle. I will be the one to shut it down -- I'm not going to blame you for it."

Related Topic(s): Immigrants; Trump Border Wall; Trump Ego; Trump Liar; Trump Wall Speech, Add Tags
Add to My Group(s)
Go To Commenting
The views expressed herein are the sole responsibility of the author and do not necessarily reflect those of this website or its editors.