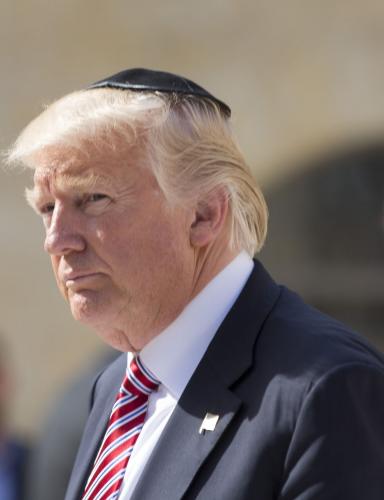 On Sunday Donald Trump told Face The Nation, when asked about when US troops will be leaving Syria, "We have to protect Israel." He went on to say that many of the 2,000 US troops that are leaving Syria will be going to Al-Asad, a US base in Anbar province, Iraq. Trump said the reason they're going to Iraq, and why the US will keep a military presence in Iraq, is so the US can keep an eye on Iran.

Why does Trump and other US politicians from both political parties want to keep US troops in harm's way and at great financial expense to American tax payers as they keep an eye on Iran: to protect the Jewish state of Israel.

Iraqi officials are very angry with Trump's plans to continue the 16-year-old US occupation of Iraq. What is both surprising and disappointing is that Americans are NOT angry and outraged that Trump and US politicians are sacrificing American lives and spending literally trillions of American tax dollars protecting the foreign Jewish state of Israel. Of course, the vast majority of Americans are not aware of this because the mainstream media does not report on it.

Trump is refreshingly open and consistent about sacrificing American lives and spending American tax dollars for Israel's benefit. Not only did he state that Israel is why US troops are in Syria and Iraq this past Sunday on Face the Nation, he did so this past November in an interview he did with the Washington Post.

The top brass of the US military, who are little more than bureaucrats in uniform who see individual American troops as nothing more than a means of advancing their own careers, fully embrace the US political mindset of Israel over all. This is evident by USAF Third Air Force commander Lt.-Gen. Richard Clark, who also serves as the commander for the deploying Joint Task Force Israel. Clark said this past March during the Juniper Cobra joint military exercise between Israel and the US, which took place in Israel, that US troops are "prepared to die for the Jewish state".

Donald Trump, politicians from both parties and US military brass all like to wave the American flag and talk about putting America first. While pretending to put Americans and the US first, they do the opposite by wasting the irreplaceable lives of Americans and spending countless US tax dollars all for the benefit of the foreign religious state of Israel. By putting the US and Americans in a subservient position to Israel, they are simultaneously doing what is most important to them: advancing their own careers. The more they promote Israel, the more they win favor with the overly powerful Israel lobby.

Bob Johnson is a paralegal and a freelance writer in Florida. He was raised Roman Catholic, but after reading Thomas Paine's The Age of Reason, he became a Deist. In 1993 he founded the World Union of Deists and in 1996 he launched the first web (more...)
Related Topic(s): Israel; Israeli_Propaganda; Media; Military; Occupation; Other; People; Religion; Revolution, Add Tags
Add to My Group(s)
Go To Commenting
The views expressed herein are the sole responsibility of the author and do not necessarily reflect those of this website or its editors.