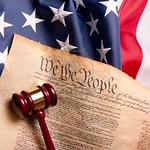 Donald Trump at the National Prayer breakfast this week said, "I will get rid of and totally destroy the Johnson Amendment [banning political endorsements by churches] and allow our representatives of faith to speak freely and without fear of retribution. I will do that -- remember."

I hear it this way, "allow our Fundamentalist Evangelical Christianrepresentatives of faith to speak freely and without fear of retribution."

Now, before you sincere Christians reject this article out of hand, please understand a single distinction. This form of re-contextualized American Christianity I'm referring to is the extremist version called Dominionism. Dominion Theology is a contemporary grouping of theocratic ideologies that seek to institute a nation governed by Christians based on understandings of biblical law. The label is applied primarily toward groups of Protestants in the United States.

But this connection is not absolute. Our current Vice President, Mike Pence, made this claim when asked about his religion, "I made a commitment to Christ. I'm a born-again, evangelical Catholic."

As one would expect, there are as many variations in Christianity as there are members, since Martin Luther claimed "sola scriptura." Sorry, I digress.

Trump's statement was a nod to the Fundamentalist Christian Evangelical Right [i] who supported him. Their goal is that found in Christian Dominionism. His promise is another step in a well-organized plan that starts with the Home Schooling movement.

Here's an interesting take from an ex-Evangelical, Kieryn Darkwater in his article titled, "I Was Trained for the Culture Wars in Home School, Awaiting Someone Like Mike Pence as a Messiah"I was taught by every pastor I encountered that it was our job as Christians to outbreed the secularists (anyone not a far-right evangelical Protestant) and take over the government through sheer numbers. I was part of TeenPact, Generation Joshua and my local Teenage Republicans (TARS).

"The First Amendment (Amendment I) to the United States Constitution prohibits the making of any law respecting an establishment of religion, ensuring that there is no prohibition on the free exercise of religion "It was adopted on December 15, 1791, as one of the ten amendments that constitute the Bill of Rights ."

Somehow and for some reason, this movement is convincing elected officials to ignore this constitutional prohibition in the name of religious freedom to impose its interpretations on the United States through their belief in the inerrancy of a flawed 2000-year-old document. A document written in Classical Greek, recording oral traditions, re-interpreted into numerous different languages, influenced by personal agendas, unable to reconcile its own morality, and containing only those segments approved by the authority of flawed human councils centuries after it was written.

Could it be their financial support?

This seems to be one of the major components of the "make America great" again promise of the current U.S. President, Vice President and their allies from this re-contextualized, so-called Christian religion.

This is the seed that has grown and flourished in the great culture war raging in the United States. It is a war between secularism and fundamentalism; between thesis and antithesis. It is the postmodern dialectic with no chance of synthesis. Moderates seem to be asleep. Until we wake up there is no power in the middle where synthesis forms.

In 2014, I published a book titled Christianity in America, Friend or Foe. You can purchase it for as little as $4.99 on the Internet. If you can't afford it, email me, and I'll send it to you for the cost of the handling and postage. It is a compilation of 50 essays on the topic of Christianity in America, is it friend or foe? Read the book. You be the judge.

Related Topic(s): America; Christianity; Culture; Dominionism; Evangelical; Faith; Fundamentalism; Fundamentalists; Protestant; Religion; (more...) Secularism; Theology, Add Tags  (less...)
Add to My Group(s)
Go To Commenting
The views expressed herein are the sole responsibility of the author and do not necessarily reflect those of this website or its editors.