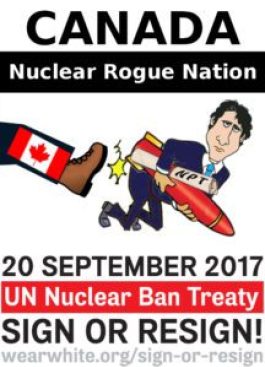 Justin Trudeau presents himself as "progressive" on foreign affairs. The Liberals claim to have brought Canada "back" after the disastrous Harper Conservatives. But their nuclear weapons policy demonstrates the emptiness of this rhetoric.

Reducing the chance nuclear weapons are used again should be a priority for any "progressive" government. But, powerful Canadian allies oppose nuclear arms controls so Trudeau's government isn't interested in the "international rules based order" needed to do curb the existential threat nukes pose to humankind.

The Liberals have voted against UN nuclear disarmament efforts supported by most countries. At the behest of Washington, they voted against an important initiative designed to stigmatize and ultimately criminalize nuclear weapons. They refused to join 122 countries represented at the 2017 Conference to Negotiate a Legally Binding Instrument to Prohibit Nuclear Weapons, Leading Towards their Total Elimination.

Last month Swedish Foreign Minister Margot Wallström hosted a high-level meeting to reinvigorate nuclear disarmament commitments made by states party to the Nuclear Non-Proliferation Treaty (NPT). While most of the 16 countries were represented in Stockholm by their foreign ministers, Chrystia Freeland did not attend. Instead, the government dispatched Parliamentary Secretary for Consular Affairs Pamela Goldsmith-Jones.

Through NATO, Canada has effectively committed to fighting a nuclear war if any country breached its boundaries. Additionally, the alliance does not restrict its members from using nuclear weapons first. Canada participates in the NATO Nuclear Planning Group and contributes personnel and financial support to NATO's Nuclear Policy Directorate.

While NATO maintains nuclear weapons in Turkey and various European countries, Canadian officials blame Russia for the arms control impasse and the recent demise of the Intermediate-Range Nuclear Forces (INF) Treaty, which banned an entire class of nuclear weapons. In April Director General of International Security Policy at Global Affairs Canada, Cindy Termorshuizen said, "we call on Russia to return to compliance with the INF Treaty." But, it's not clear Russia violated one of the most significant nuclear accords ever signed. The Trump administration, on the other hand, began to develop new ground-launched intermediate-range missiles prohibited under the pact long before it formally withdrew from the INF. US military planners want to deploy intermediate-range missiles against China, which is not party to the INF.

At that vote Canada's representative said Moscow's position on the INF reflects its "aggressive actions in neighbouring countries and beyond." But, it is Washington that broke its word in expanding NATO into Eastern Europe, withdrew from the Anti-Ballistic Missile treaty in 2001 and established missile'defence' systems near Russia. As part of NATO Canadian troops are stationed on Russia's border in Latvia and Ukraine, which isn't conducive to nuclear retrenchment.

A look elsewhere demonstrates the Liberals' ambivalence to nuclear disarmament. They strengthened the Stephen Harper government's agreement to export nuclear reactors to India, even though New Delhi has refused to sign the NPT (India developed atomic weapons with Canadian technology). The Trudeau government wouldn't dare mention Israel's 100+ nuclear bombs or endorse a nuclear free Middle East. While they've publicly stated their support for the Iran nuclear accord, they have not supported European efforts to save the Joint Comprehensive Plan of Action. (Or restarted diplomatic relations with Iran as promised.)

Despite some progressives claiming otherwise, Canada has never been an antinuclear country. In fact, if one were to rank the world's 200 countries in order of their contribution to the nuclear arms race Canada would fall just behind the nine nuclear armed states. Among many examples of nuclear complicity, Canada spent tens of millions of dollars to help develop the first atomic bombs, CF-104 Starfighters stationed in Europe carried a nuclear weapon and various US nukes were stationed in Canada.

Still, governments from the 1970s through the 1990s expended some political capital on nuclear non-proliferation. While the follow-through was disappointing, Trudeau Père at least spoke about "suffocating" the nuclear arms race.

His son, on the other hand, responded to a call to participate in a widely endorsed nuclear disarmament initiative by stating "there can be all sorts of people talking about nuclear disarmament, but if they do not actually have nuclear arms, it is sort of useless to have them around, talking." Justin Trudeau also refused to congratulate Canadian campaigner Setsuko Thurlow, a survivor of the atomic bombing of Hiroshima, who accepted the 2017 Nobel Peace Prize on behalf of the International Campaign to Abolish Nuclear Weapons.

Justin Trudeau's government does not even talk the talk, let alone walk the walk when it comes to ending the threat of nuclear annihilation.

Related Topic(s): Nuclear Regulatory Commission, Add Tags
Add to My Group(s)
Go To Commenting
The views expressed herein are the sole responsibility of the author and do not necessarily reflect those of this website or its editors.