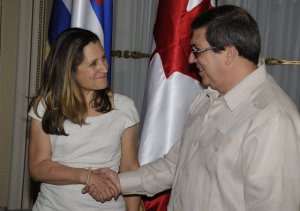 Ottawa has followed along partly because it's committed to overthrowing Venezuela's government and an important talking point of the anti-Nicola's Maduro coalition is that Havana is propping him up. On May 3 Justin Trudeau called Cuban president Miguel DÃ­az-Canel to pressure him to join Ottawa's effort to oust President Maduro.

Ottawa faces a dilemma. How far are Trudeau's Liberals prepared to go in squeezing Cuba? Can Canadian corporations with interests on the island restrain the most pro-US, anti-socialist, elements of the ruling class?

Recently, the Canadian Embassy in Havana closed its Immigration, Refugees and Citizenship section. Now most Cubans wanting to visit Canada or get work/study permits will have to travel to a Canadian embassy in another country to submit their documents. In some cases Cubans will have to travel to another country at least twice to submit information to enter Canada. The draconian measure has already undercut cultural exchange and family visits, as described in a Toronto Star op-ed titled "Canada closes a door on Cuban culture".

It's rare for an embassy to simply eliminate visa processing, but what's prompted this measure is the stuff of science fiction. Canada's embassy staff was cut in half in January after diplomats became ill following a mysterious ailment that felled US diplomats sent to Cuba after Donald Trump's election. Four months after the first US diplomats (apparently) became ill US ambassador Jeffrey DeLaurentis met his Canadian, British and French counterparts to ask if any of their staff were sick. According to a recent New York Times Magazine story, "none knew of any similar experiences afflicting their officials in Cuba. But after the Canadian ambassador notified his staff, 27 officials and family members there asked to be tested. Twelve were found to be suffering from a variety of symptoms, similar to those experienced by the Americans."

With theories ranging from "mass hysteria" to the sounds of "Indies short-tailed crickets" to an "outbreak of functional disorders", the medical questions remains largely unresolved. The politics of the affair are far clearer. In response, the Trump Administration withdrew most of its embassy staff in Havana and expelled Cuban diplomats from Washington. They've rolled back measures the Obama Administration instituted to re-engage with Cuba and recently implemented an extreme measure even the George W. Bush administration shied away from.

Ottawa has followed along partly because it's committed to overthrowing Venezuela's government and an important talking point of the anti-Nicola's Maduro coalition is that Havana is propping him up. On May 3 Justin Trudeau called Cuban president Miguel DÃ­az-Canel to pressure him to join Ottawa's effort to oust President Maduro. The release noted, "the Prime Minister, on behalf of the Lima Group [of countries hostile to Maduro], underscored the desire to see free and fair elections and the constitution upheld in Venezuela." Four days later Foreign Minister Chrystia Freeland added to the diplomatic pressure on Havana. She told reporters, "Cuba needs to not be part of the problem in Venezuela, but become part of the solution." A week later Freeland visited Cuba to discuss Venezuela.

On Tuesday Freeland talked with US Secretary of State Mike Pompeo about Venezuela and Cuba. Afterwards the State Department tweeted, "Secretary Pompeo spoke with Canada's Foreign Minister Freeland to discuss ongoing efforts to restore democracy in Venezuela. The Secretary and Foreign Minister agreed to continue working together to press the Cuban regime to provide for a democratic and prosperous future for the people of Cuba."

Ottawa supports putting pressure on Cuba in the hopes of further isolating/demonizing the Maduro government. But, the Trudeau government is simultaneously uncomfortable with how the US campaign against Cuba threatens the interests of some Canadian-owned businesses.

The other subject atop the agenda when Freeland traveled to Havana was Washington's decision to allow lawsuits for property confiscated after the 1959 Cuban revolution. The Trump Administration recently activated a section of the Helms-Burton Act that permits Cubans and US citizens to sue foreign companies doing business in Cuba over property nationalized decades ago. The move could trigger billions of dollars in legal claims in US courts against Canadian and European businesses operating on the island.

Obviously, Canadian firms that extract Cuban minerals and deliver over a million vacationers to the Caribbean country each year don't want to be sued in US courts. They want Ottawa's backing, but the Trudeau government's response to Washington's move has been relatively muted. This speaks to Trudeau/Freeland's commitment to overthrowing Venezuela's government.

But, it also reflects the broader history of Canada-Cuba ties. Despite the hullabaloo around Ottawa's seemingly cordial relations with Havana, the reality is more complicated than often presented. Similar to Venezuela today, Ottawa has previously aligned with US fear-mongering about the "Cuban menace" in Latin America and elsewhere. Even Prime minister Pierre Trudeau, who famously declared "viva Castro" during a trip to that country in 1976, denounced (highly altruistic) Cuban efforts to defend newly independent Angola from apartheid South Africa's invasion. In response, Trudeau stated, "Canada disapproves with horror [of] participation of Cuban troops in Africa" and later terminated the Canadian International Development Agency's small aid program in Cuba as a result.

After the 1959 Cuban revolution Ottawa never broke off diplomatic relations, even though most other countries in the hemisphere did. Three Nights in Havana explains part of why Ottawa maintained diplomatic and economic relations with Cuba: "Recently declassified State Department documents have revealed that, far from encouraging Canada to support the embargo, the United States secretly urged Diefenbaker to maintain normal relations because it was thought that Canada would be well positioned to gather intelligence on the island." Washington was okay with Canada's continued relations with the island. It simply wanted assurances, which were promptly given, that Canada wouldn't take over the trade the US lost. For their part, Canadian business interests in the country, which were sizable, were generally less hostile to the revolution since they were mostly compensated when their operations were nationalized. Still, the more ideological elements of corporate Canada have always preferred the Cuban model didn't exist.

If a Canadian company is sued in the US for operating in Cuba Ottawa will face greater pressure to push back on Washington. If simultaneously the Venezuelan government remains, Ottawa's ability to sustain its position against Cuba and Venezuela is likely to become even more difficult.

Related Topic(s): Cuba-canadian Relation, Add Tags
Add to My Group(s)
Go To Commenting
The views expressed herein are the sole responsibility of the author and do not necessarily reflect those of this website or its editors.