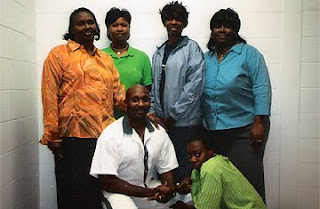 Laura Moye is director of the Amnesty International USA Death Penalty Abolition Campaign. In this interview, Moye talks about 42-year-old Troy Davis, an African American who has been on death row in Georgia for over 19 years--having already faced three execution dates. The continued railroading of Davis has sparked outrage around the world, and public pressure during the last few years of Davis' appeals has been essential to his survival today.

However, on March 28, 2011, the US Supreme Court's rejected his appeal against a federal district court's ruling that Davis did not prove his innocence in an evidentiary hearing held last year. This week Amnesty International released an email action alert, emphasizing that now, more than a month after the Supreme Court ruling, Davis' execution date can literally be scheduled any day. The situation is dire, and public support is currently needed now more than ever before.

To take action and learn more, visit Amnesty International's page focusing on Troy Davis, as well as the Color of Change petition, www.justicefortroy.org and www.troyanthonydavis.org.

Angola 3 News: Why does Amnesty International consider Troy Davis' case to be so important?

Laura Moye: Troy Davis' case is emblematic of a broken and unjust death penalty system. His story speaks volumes about a criminal justice system that is riddled with bias and error and is fixated on procedure more than it is on fairness.

It is often difficult to get people to understand or to be interested in systematic and large-scale injustice, but Troy Davis' story has gotten through to a lot of people and has made the abolition cause more tangible and real for a lot of people.

A3N: What do you think are the most compelling facts about this case?

LM: The case against Davis has unraveled, yet he still faces execution. The conviction rests primarily on nine key witnesses, but six have recanted and one contradicted her trial statement. The police recovered shell casings at the crime scene, which were naturally present given that there was a shooting. However, they never found a murder weapon or any other physical evidence linking the shell casings to Troy Davis.

Almost all of the witnesses were vulnerable for one reason or another. One witness was illiterate, others were minors that were questioned without their parents or supportive adults, some had criminal histories, and most were African American.

The murder of the white police officer enraged local law enforcement, and indeed it was a terrible crime. Officer Mark MacPhail was rushing to the aid of a homeless man who was beaten unconscious in a Burger King parking lot on the other side of a Greyhound bus station in a poor end of town. When he came running to the scene, he was shot, and he fell to the ground without even having drawn his weapon. He left behind a wife and two very small children. Outrage was appropriate in the wake of his death. However, reports about how the investigation was conducted call into question how fair and proper things went. Many speak to the intense pressure on the African American community to find the perpetrator. Most of the witnesses allege coercion by the police in obtaining statements.

Strangely, one of the two witnesses who did not recant his testimony has been implicated in at least nine affidavits and by a new eyewitness account as being the actual perpetrator. This very same man was the one who first reported to the police that Davis was the shooter. He was never treated as a suspect himself. He was not put in line-ups and he was present at the crime scene with other witnesses for a reenactment of the events.

Davis had a heck of a time trying to seek relief once his case moved from the trial level to the post-conviction habeas process. The Georgia Resource Center was hit with a two-thirds budget cut, which reduced the number of staff attorneys to two, representing about eighty prisoners. Triage was not even possible with the remaining resources. Yet this was the time for Davis to assemble evidence and an argument about his innocence claim.

Also, in the mid-1990s, the Anti-Terrorism and Effective Death Penalty Act (AEDPA), was passed on the heels of the Oklahoma City Bombing. It limited access by death row prisoners of the federal appeals process, placing time limits on introduction of new evidence for example. Davis' case was negatively impacted along with others.

Troy Davis has been confronted with a system that would rather hold onto a decision a jury made twenty years ago than admit that some fundamentally wrong things have happened. It is a system bent on preserving itself more than on being absolutely sure that injustice and inaccuracy are filtered out.

A3N: Please tell us more about the racism in Davis'case.

LM: Davis is African American. MacPhail, the murder victim, was White. The perpetrator was indisputably African American. The crime happened on a poor end of town, near housing projects and behind a Greyhound bus station. The racial dynamics in the community were inflamed by the murder and the ensuing investigation. Many African Americans have talked about the fear they felt in the midst of a very intense manhunt.

A3N: Do you think the injustices in his case are symptomatic of the overall criminal justice system in the US?

LM: Many death penalty cases have issues of unfairness. Davis' is less common in that there is a serious innocence claim.

However, how people are treated by the criminal justice system because of their background, particularly race and class, is illustrated by this case. The lack of resources for people's defense and appeals work is very common. And the difficulty in accessing the appeals process for meaningful relief is also very difficult.

A3N: Why have the appeals courts been so opposed to granting a new trial?

LM: The county superior court in Savannah, Georgia would not grant Davis' "extraordinary motion for a new trial." He appealed this all the way up to the U.S. Supreme Court and was denied. Interestingly, the Georgia Supreme Court denied his appeal by one vote.

The courts are very hesitant to re-open death penalty cases. Witness recantations are considered suspect and testimony by the many people who implicate the other suspect are dismissed as "hearsay." And yet we know that most of the 138 exonerees from death row did not have DNA at their disposal, just like Davis, who had no other kind of physical evidence.

At trial, the state has the burden to prove the defendant is "guilty beyond a reasonable doubt." After a conviction, that standard disappears. The prisoner then has an uphill battle to prove that the conviction was wrong or faulty.

A3N: When do you expect that an execution date will be set?

LM: As soon as Georgia announces that it has a protocol for carrying out executions again, we expect an execution warrant to be signed against Davis. From that point, an execution date could be two weeks away.

A couple months ago, the DEA seized Georgia's supply of lethal injection drugs after a complaint was filed about how they accessed their supply of Sodium Thiopental. Davis would already have received a date if this issue was not at play. So time is very much of the essence.

A3N: What can our readers do to support Troy Davis right now?

If you know clergy or legal professionals, ask them to please sign the sign-on letters for Troy. And when a date is set, join us for an international day of solidarity, where we will have demos around the world in advance of Davis' clemency hearing to show the parole board that the world is watching and demands a stop to the execution!

--Angola 3 News is a project of the International Coalition to Free the Angola 3. Our website is http://www.angola3news.com where we provide the latest news about the Angola 3. We are also creating our own media projects, which spotlight the issues central to the story of the Angola 3, like racism, repression, prisons, human rights, solitary confinement as torture, and more. Amnesty International has issued a statement of support for Herman Wallace and Albert Woodfox, the two members of the Angola 3 who remain in prison today, after more than 39 years of solitary confinement.

Over 40 years ago in Louisiana, 3 young black men were silenced for trying to expose continued segregation, systematic corruption, and horrific abuse in the biggest prison in the US, an 18,000-acre former slave plantation called Angola. In 1972 and (more...)
Related Topic(s): Amnesty International; Death; Evidence; Execution; Family; Injustice; Innocence; International; Interviews; Justice; (more...) Law; Media; Petition; Police; Prisoners; Race; Rights; Torture, Add Tags  (less...)
Add to My Group(s)
Go To Commenting
The views expressed herein are the sole responsibility of the author and do not necessarily reflect those of this website or its editors.