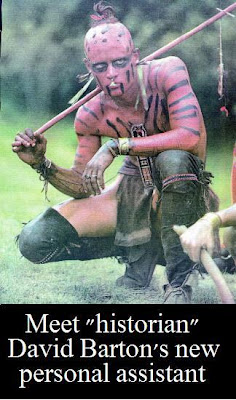 David Barton has come up with some pretty far-reaching  interpretations of the Bible , but his latest pronouncements now border on criminal violence, especially regarding children.

[Barton claims] the Bible justifies and even encourages spanking. He claims that if anything parents should spank their children not with their hands but with "belts or hairbrushes, or they can use a paddle or whatever it is," because "always in the Bible discipline is with a rod, it's not with a hand." Barton goes on to say "we do the same thing with horses," saying spanking children is like beating horses with a rod or crop.

Looking at Barton's "historical" pedigree or any other resource for his pronouncements offers the reader endless amusement and amazement at the fiction he purports to be fact. Historian John Fea says that Barton cherry picks the past and, while disregarding the context violates "every rule of historical inquiry." Using Barton's own method on Barton himself, however, makes for The Onion headlines:

Jesus Hates The Minimum Wage!
Why Don't We Regulate Homosexuality?
Democrats Were Responsible For Slavery and Jim Crow!
Our National Borders Were Drawn By God!

No disrespect to our Native American friends, but this is where you hang a bloody scalp over the gallery rail. You hang these four Republican scalps over the Senate rail and every other Republican senator looks up and sees those scalps and says, 'my gosh, I'll be hanging up there beside them if I don't stay with this pro-family stuff.' And that's exactly what has to happen.

Native American FRIENDS? A Freudian slip shows us that Barton still thinks of Native Americans as, well, non-American. He could have said simply "Native Americans". No matter, because his imagery of scalping by savages got his point across: if you even think of voting against our kind of Christianity (Dominionism), you'll provoke dire consequences. Possibly violent ones.
OK, that exegesis is a bit harsh, but Barton's rhetoric does beg the question "How far will he go?"

BARTON'S LINK TO ...
Barton's devotion to Christianity clearly overshadows his politics: he graduated from Oral Roberts University with a degree in religious education. He taught math and science (?!) at a Christian school linked to a church founded by his parents in Aledo, Texas. It was there he founded Wallbuilders, a group which focuses on "America's Forgotten History and Heroes."
Barton also served as the vice-president of the Texas Republican Party and worked as an adviser to the Republican National Committee. He has also actively campaigned not only for prayer in schools but for the active use of the Bible in public schools. Other affiliations: Providence Foundation and Scripture for America. The Providence Foundation is similar to R.J. Rushdooney's Calcedon Foundation which promotes Reconstructionism. The second one is disputed by Barton, claiming he spoke to the group once, but did not know what it really represented.
Scripture for America is a Christian Identity group advocating white supremacy, anti-Semitism and extreme homophobia. Barton is quickly joining the Tony Perkins' meme group "I didn't know"*
THE BLACK ROBE REGIMENT
Another affiliation of Barton's is the Black Robe Regiment which claims to " protect the freedoms and liberties granted to a moral people in the divinely inspired US Constitution." Immediately, the organization puts the Constitution on a par with the Bible because it was "divinely inspired." BRR, in its mission statement, is overtly Reconstructionist: " It is to be a portal for Christians to  communicate and network in order to restore the body of Christ to its rightful position of tolerant leadership in all aspects of our government."
Of course, all these organizations take a back seat to Wallbuilders, Barton's own group founded on the principle that America, as a Christian-founded nation should return to being a Christian-only nation.
So now that David Barton has literally crossed the line in advocating corporal punishment for children and threatened acts of physical reprisal on Republicans, whither shall he fly? Another affiliation might provide the answer: Bryan Fischer and the American Family Association. Fischer may be persona non grata to most of humanity, but he can provide a supportive path to the people who would dearly love to use force for the purposes of "conversion." In Christian Ethics Today:

Of course, Barton has his supporters, but we must be ever vigilant as to who they are. They are in the likes of Mike Huckabee and Tony Perkins. They are in the likes of the (now) deceased Lester Roloff:
"Better a pink bottom than a black soul."**
- Lester Roloff, Texas Homes for Wayward Youth.
*When Tony Perkins of the Family Research Council purchased a mailing list from David Duke, he reportedly did not know from whom he was purchasing the list. He also used the defense when the George "rentboy" Rekers scandal broke out. Rekers was an actual founder of the Family Research Council.
**Roloff opened a chain of homes for "wayward" youth in the state of Texas; he was later jailed in 1973 and again in 1975 for child abuse due to the punitive punishment techniques used in his homes. He was then specifically given permision to re-open his homes by Governor George W Bush.

Rev. Dan Vojir is has been writing/blogging on religion and politics for the better part of ten years. A former radio talk show host (Strictly Books " Talk America Radio Network) and book publisher, Dan has connected with some of the most (more...)
Related Topic(s): Anti-semitism; Child Abuse; Christian Right; Christian Values; Christian-only; Christian-taliban; David Barton; David Duke; Horses, Add Tags
Add to My Group(s)
Go To Commenting
The views expressed herein are the sole responsibility of the author and do not necessarily reflect those of this website or its editors.