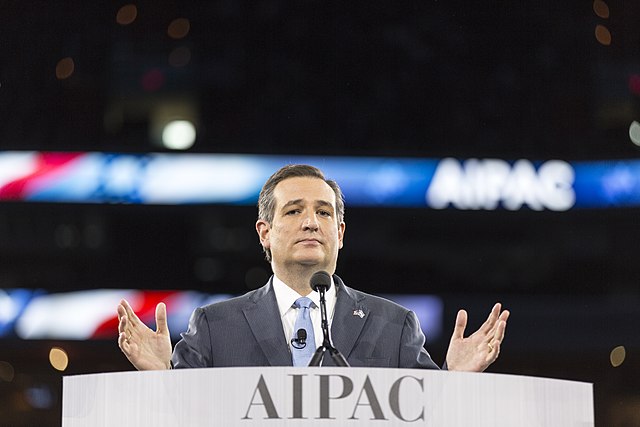 In 2016, Bernie Sanders was excoriated for not showing up at and genuflecting for AIPAC, even though he offered to speak via video.

Now, his example is being followed by a good number of the "progressive" presidential candidates running for president, including, in addition to Sanders, Elizabeth Warren, Beto O'Rourke and Kamala Harris.

Just add this as another leadership example that Bernie has set. And it's a very good thing. AIPAC has proven itself to be a tool of right-wing corrupt politician Benjamin Netanyahu, Donald Trump, the new Jexodus joke and Republicans trying to peel off American Jews from their support for Democrats and lefty candidates.

Perhaps one factor contributing to the Democratic candidates' descisions to not attend AIPAC's conference is the vote by 74% of Moveon members to oppose attendance. Moveone included the following information in the poll:

The survey, which entails a single prompt, "Any progressive vying to be the Democratic nominee for president should skip the AIPAC conference," is prefaced by several facts, including:

It's time that AIPAC be treated as what it is, a tool of the right wing. There is an alternative to AIPAC, J-Street, which has been brutally attacked, in the past, by AIPAC and hard right Israel supporters. I would argue that progressive Democratic candidates should show their support for Jews and Israel by strengthening their connection with J-Street.

I'll add that there is an effort on the right to damage the relationship between Jews and Democrats. Trump says that "The Democrats have proven to be anti-Israel and it's a disgrace" and, "Frankly, I think they are anti-Jewish."

And Trumps Secreatry of State, Mike Pompeo, working a related theme, as Alternet reports, stokes bizarre theological belief that Trump was chosen by God to 'to help save the Jewish people'

I don't think many Jewish Democrats will buy this nonsense. But the seventy million Christian Zionists will slurp it up.

Related Topic(s): AIPAC; Israel; J-Street; Right Wing Evangelicals; Trump Israel, Add Tags
Add to My Group(s)
Go To Commenting
The views expressed herein are the sole responsibility of the author and do not necessarily reflect those of this website or its editors.