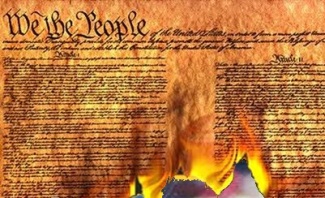 With the ongoing hysteria over "fake news" after the shocking defeat of Hillary Clinton and her neocon war cabinet now at a deafening pitch, it is an opportune time to eradicate the alternative media once and for all. That could easily be facilitated by dangerous legislation quietly moving through Congress that would create a totalitarian environment for government thought police to bring an iron jackboot down upon whatever a new intelligence committee with sweeping powers deems to be "Russian" propaganda. In layman's terms, this means that ANYONE who communicates views that are critical of the corrupt oligarchy's war machine is subject to harassment, prosecution and worse.

You won't read about this existential threat to free speech and association anywhere in the corrupt and thoroughly discredited U.S. establishment media but it is getting some attention across the pond.

In a terrifying story from The Guardian entitled "US Legislation Proposes New Committee to Counteract Russian 'Covert Influence" it is reported:

A provision in intelligence legislation that is going through Congress would create a new high-level body aimed at thwarting covert Russian political interference around the world, potentially placing it at odds with the incoming Donald Trump administration.

The measure, tucked into the fiscal 2017 House and Senate bills authorizing US intelligence operations, would create a powerful new committee across the security services to oppose Russian destabilization measures and propaganda domestically and worldwide.

Its mission -- defined broadly and without geographic limitation -- is to "counter active measures by the Russian Federation to exert covert influence over peoples and governments", according to the texts of both the House and the Senate bills, both of which have won the approval of their intelligence committees.

Specifically, the high-level committee would be tasked with "exposing falsehoods, agents of influence, corruption, human rights abuses, terrorism and assassinations carried out by the security services or political elites of the Russian Federation or their proxies".

Yet its work would not be necessarily limited to exposing such activity. It can be broadened to include "such other duties as the president may designate", a vague and potentially expansive mandate.

Capitol Hill sources said the House version could receive a floor vote as soon as Wednesday, with the Senate version likely to follow in a matter of weeks, before the current legislative session expires. Intelligence authorization bills rarely fail to pass when brought up for votes.

That this is taking place with absolutely zero domestic media coverage nor a public debate is an outrage. In the place of honest reporting we instead have one of the nation's two most prominent newspapers engaging in what can only be referred to as a neo-McCarthyist witch hunt by promoting a murky and mysterious group's blacklist of over two-hundred alternative websites that are labeled as Putin's domestic propaganda outlets.

The Washington Post's technology columnist Craig Timberg served up a Thanksgiving Day feast of vile red-baiting innuendo in his magnum opus of anti-Americanism entitled "Russian propaganda effort helped spread 'fake news' during election, experts say" that is so diseased and deranged that it should place an indelible blot upon the paper's reputation for as long as it exists.

The sites on the list run the gamut from very right-wing to libertarian to progressive to leftist and the WAPO never once bothers to provide the criteria used to identify why a particular website is on the list. There many obscure and some outright bigoted blogs along with flat-out conspiracy theory clearinghouses but one gets the feeling that they are only on the list to slime legitimate sources of reporting and anti-establishment opinion by association.

A few common elements are present with many of the sites and that is that they opposed the Clinton restoration, reported honestly on the Wikileaks releases of emails detailing Democratic party skullduggery and are generally critical of U.S. foreign policy as it relates to Syria, Ukraine and Russia. I would doubt that the vast majority of the sites that PropOrNot is calling for federal investigation of give a rat's ass about Russia outside of trying to prevent the neocon zealots and their cruise missile liberal allies from starting World War III.

Related Topic(s): Alternative; Alternative Media; Congress; Propornot; Vladimir Putin, Add Tags
Add to My Group(s)
Go To Commenting
The views expressed herein are the sole responsibility of the author and do not necessarily reflect those of this website or its editors.