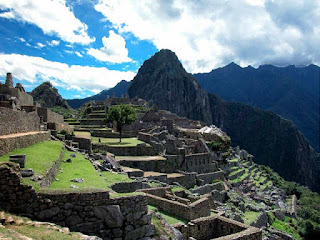 
July 25, marks the 100th anniversary of the discovery of the "Lost City" of Machu Picchu.
Hiram Bingham III (1875-1956), historian, explorer, treasure hunter and politician "discovered" the city that the Incas had abandoned 400 years before and which the Spanish conquistadors were never able to find.  (He was the inspiration behind Hollywood's Indiana Jones character.)  About 1,000 people were living there at the time.
Although other explorers had "found" Machu Picchu years before, Bingham was the first to scientifically explore and publicize the place that had been covered in an overgrowth of jungle trees and vines.  The entire April 1913 issue of National Geographic was devoted to his work there. Bingham also wrote about it, notably Inca Land: Explorations in the Highlands of Peru (1922) and Lost City of the Incas, a 1948 best-seller.


Machu Picchu was revered as a sacred place at a time quite a bit before the Incas "adopted" it as their own.  The five-square-mile complex of palaces, baths, temples, storage rooms and about 150 houses arranged around a central plaza was completely self-contained.  It was surrounded by agricultural terraces and watered by natural springs that could accommodate the population that lived there.  Here is an example of the stone cuttings that were fitted together without mortar.  Their construction was well-suited for earthquakes because they could sustain tremors without collapsing.


There is great speculation about why the Incas built Machu Picchu.  Some say it was an estate and retreat site for Pachacuti and his royal court to relax, hunt and entertain guests.
Others speculate it was a nunnery or a training center for priestesses, although that theory has been debunked since skeletal remains there were half male and half female.
Bingham thought it was the birthplace of Inca society but that theory has since been disproved, too, when archaeologists determined that it was Espirtu Pampa, about 80 miles west of the Inca capital city of Cuzco.  Actually, Bingham was looking for Vilcambamba la Vieja, the last stronghold of the Incas before the Spanish conquistadors took over, when he found Machu Picchu.
Machu Picchu is built on the flat top of a mountain 2,000 feet above the Urubamba River (named the Vilcamayo or Sacred River by the Incas) that encircles the five-square-mile area.  In the center of the plaza was a sundial, the Intihuatana stone (meaning "Hitching Post of the Sun"), that was dedicated to the god, Inti.  It has alignments with the rising and setting of the sun as well as the mountains during the spring (March 21) and fall (September 21) equinoxes, consequently, some scholars see the area as a "sacred landscape."
The Spaniards never found Machu Picchu, even though they suspected its existence, thus the Intihuatana stone and its resident spirits remain in their original position. The mountain top sanctuary fell into disuse and was abandoned some forty years after the Spanish took Cuzco in 1533. Supply lines linking the many Inca social centers were disrupted and the great empire came to an end.


A 2009 study by Giulio Magli, an astrophysicist at the Polytechnic Institute in Milan, Italy, postulated that Machu Picchu was a pilgrimage site and a scaled-down version of a mythic landscape from the Inca religion.  Worshipers could symbolically relive the harrowing journey of Manco Capac and his sister, Mama Occlo, who both rose out of Lake Titicaca to found a great city.
As legend has it, they were given a golden staff by the Sun, their father, who bade them settle permanently at whatever place the staff should sink into the earth. Through a series of adventures, geomantic resonances, and astronomical correspondences, the site of Cuzco was chosen.  According to the most frequently told story, four brothers, Manco Capac, Ayar Anca, Ayar Cachi, and Ayar Uchu, and their four sisters, Mama Ocllo, Mama Huaco, Mama Cura (or Ipacura), and Mama Raua, lived at the Paccari-Tampu [tavern of the dawn], several miles distant from Cuzo.  They gathered together the tribes of their locality, marched on the Cuzco Valley, and conquered the tribes living there.  Manco Capac had by his sister-wife, Mama Ocllo, a son called Sinchi Roca (or Cinchi Roca).  Authorities concede that the first Inca chief to be a historical figure was called Sinchi Roca (c. 1105-c. 1140).  Thus the foundation for an empire was laid.
Source:  Info Please

Machu Picchu sits 9,090 feet above sea level and 300 miles south of Lima.  It is one of the most visited places in South America with 250,000 visitors per year.  Four years ago it was voted one of the Seven Wonders of the World in a global Internet poll.

After Bingham's discovery, National Geographic magazine awarded him a $10,000 grant that was matched by Yale University where he was a professor of history and politics.  This money afforded him three more expeditions to the site, which also led to the taking of 44,000 pieces and sparked a long-standing controversy between him, Yale, and Peruvians.  This past March, 366 of those pieces were returned in time for the 100th anniversary celebration.
Seven hundred guests celebrated the anniversary on July 8 complete with a symphony orchestra, fireworks and a breathtaking light show.  To read more and see photos of the celebration, see the Daily Mail story.


MY EXPERIENCE AT MACHU PICCHU
I visited Machu Picchu in March 1986 as a W.K. Kellogg National Leadership Fellow.  It was a memorable experience, mostly because I felt I touched the hand of God here and understood my smallness compared to the immensity of God's creation.  To see an excerpt from my journal and a more expanded story with photos, check out my blog: http://olgabonfiglio.blogspot.com/2011/07/travelogue-100-year-anniversary-of.html

Olga Bonfiglio is a Huffington Post contributor and author of Heroes of a Different Stripe: How One Town Responded to the War in Iraq. She has written for several magazines and newspapers on the subjects of food, social justice and religion. She (more...)
Related Topic(s): Peru; Travel, Add Tags
Add to My Group(s)
Go To Commenting
The views expressed herein are the sole responsibility of the author and do not necessarily reflect those of this website or its editors.