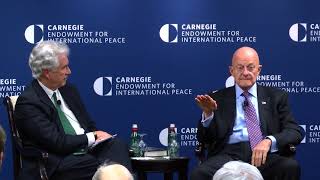 Clapper's remarks in November at the Carnegie Endowment cannot be described as entertaining, but they are highly revealing particularly the things he admits to in hawking his memoir, Facts and Fears: Hard Truths From a Life in Intelligence. Hard truths indeed.

As mentioned in an earlier posting, the full video of former National Intelligence Director James Clapper's Nov. 13 appearance at the Carnegie Endowment for International Peace in Washington, DC is now available on the Carnegie website (See here. It includes the Q&A, during which Ray had four minutes to question Clapper (starting at minute 28:45).

Ray's back-and-forth with Clapper brought a flashback to May 4, 2006, when Ray questioned then-Secretary of Defense Donald Rumsfeld for four minutes on live TV in Atlanta. See here.

As is well known, Rumsfeld's lies were legion (as he so clearly demonstrated during that particular Q&A). Clapper's lies are less well known, partly because neither C-SPAN nor CNN were broadcasting live at Carnegie, as they were in Atlanta. Rumsfeld was Clapper's patron. Before the 2003 attack on Iraq; he put Clapper in charge of the analysis of satellite imagery, in order to ensure that no imagery analyst would dare play skunk at the picnic and blurt out that there were no confirmed WMD sites. Instead, with the help of a co-opted media, Rumsfeld, Clapper, Cheney/Bush, and others were able to convince over two-thirds of Americans not only that Saddam Hussein had all manner of WMD but also that he played a role in the attacks of 9/11. That is roughly the same percentage of Americans who now have been led to believe that the Russians brought us Trump.

At the Carnegie event, Clapper repeatedly borrowed Rumsfeld's direct denial of their epic, consequential fraud before the Iraq war. He keeps repeating, "I did not lie." But of course they both did. And in doing so, they helped destroy a country that was of no threat to the U.S., get hundreds of thousands killed, and bring continuing chaos to the Middle East. They suffered zero consequences for their dishonesty.

In his memoir, Clapper admits, with stomach-churning nonchalance, that "intelligence officers, including me, were so eager to help [spread the Cheney/Bush claim that Iraq had a "rogue WMD program"] that we found what wasn't really there." (Emphasis added)

Clapper's answers on Russian "interference" in the 2016 U.S. election are, of course, of more current importance and interest particularly since he is not used to such direct questioning. The Clapper-McGovern back-and-forth is so unusual that we include below a transcript of those four minutes. (Caution: those who limit themselves to the transcript without the video will be cheated out of the body language.)

(Note: Clapper, as usual, keeps referring to the widely cited, so-called Intelligence Community Assessment of January 6, 2017, "Assessing Russian Activities and Intentions in Recent US Elections." Today, Ray plans to write an after-two-years piece explaining why that poor excuse for intelligence analysis is another fraud on the American people. Indeed, there are indications that Clapper himself had a strong hand in its drafting.)

RM: My name is Ray McGovern. Thanks for this book; it's very interesting [Ray holds up his copy of Clapper's memoir]. I'm part of Veteran Intelligence Professionals for Sanity. I'd like to refer to the Russia problem, but first there's an analogy that I see here. You were in charge of imagery analysis before Iraq.

Ray McGovern works with Tell the Word, the publishing arm of the ecumenical Church of the Saviour in inner-city Washington. He was an Army infantry/intelligence officer and then a CIA analyst for 27 years, and is now on the Steering Group of Veteran Intelligence Professionals for Sanity (VIPS). His (more...)
Related Topic(s): Fraud; Iraq; James Clapper; Questions; Reality; Video; Wikileaks, Add Tags
Add to My Group(s)
Go To Commenting
The views expressed herein are the sole responsibility of the author and do not necessarily reflect those of this website or its editors.