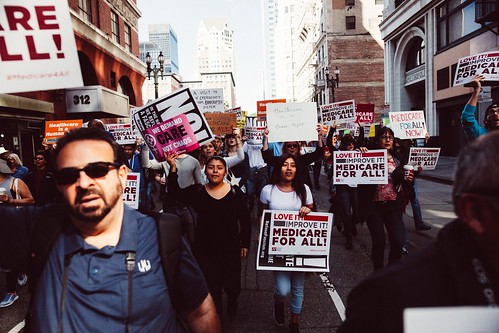 Perhaps I'm missing something, but it appears to me that millennial activism, about which I am very excited, may still fail to quite grasp something crucial. That electing people to office is only a first step. Electees must be constantly supported and held accountable. One's politician is ideally one's representative, not one's leader. S/he must be supported in a multitude of ways when diligent and effective, and re-called when not. I was recently at an Indivisible meeting where about 75 members interviewed six political candidates. Following a brief introductory statement to the entire assembly, each met with us broken into smaller groups for more intimate question-and-answer. As a newcomer, I was a bit surprised that no one in my group asked any candidate if they were thoroughly familiar with Indivisible's agenda, how it resembled and differed from other movement agendas, or if s/he had issues with any aspects of it. I asked a related question, however, which each said was a first for them: "Once in office, what further action do you want from we your hopeful electors?" Four candidates affirmed emphatically that their offices would always be open to us and that we would invariably be heard. Two, after a little thought, answered in a fashion I found compelling: "I want you to agitate, constantly," "I want you to hold town meetings and forums, to tell me what you want from me and hold me accountable."

I don't know how many of the group I was in shared my sense that these particular responses were important. Which makes me wonder how the core strategists of Indivisible or The Young Turks or Brand New Congress or Our Revolution or The Women's March or Black Lives Matter -- and other national initiatives view in-the-trenches political process in this country. So far I am only being asked to man a phone bank or walk a neighborhood or march now and then, and always to donate money. In response, I ask if I might volunteer for a team focused on morphing intense periodic activism into continuous activism, aiming to build solid, stable, long-lasting organization committed to the changes good candidates might help to bring about once we get them elected. No replies so far.

I'm thinking of the kinds of changes National Gray Panther activist Clint Smith, strives for daily in my own community of Austin, Texas. Appointed by Richard Nixon to insure that civil-service hirings and firings by his own cabinet members were based entirely on merit, Smith was demeaned and marginalized when he took his mission to heart. Nowadays, working closely with the ACLU, Smith diligently attempts to hold local government accountable for enforcing its own laws and resolutions protecting vulnerable demographics from gentrification and other abuses. Unfortunately, the people Smith represents very realistically fear retribution should they activate too vigorously and fail. They need the support of people like those at the Indivisible meeting I attended.

What if Indivisible and its sister movements should expand their activism to include dynamic community engagement in support of the grass-root goals of activists like Smith and his counterparts all over the country. This might include picketing a city hall, or demonstrating at a school-board meeting, and more. It seems to me that such an expanded focus would not water down the thrust of Indivisible as a national social force, but significantly enhance it.

Related Topic(s): Activism; Activist, Add Tags
Add to My Group(s)
Go To Commenting
The views expressed herein are the sole responsibility of the author and do not necessarily reflect those of this website or its editors.