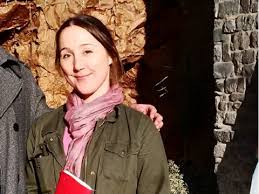 Long, productive, rewarding, and also sad, day in Aleppo. The sad-tragic-part was meeting a man, Abdel Aziz, who was held in the terrorists' underground prison in the Eye/Children's Hospital complex, occupied by terrorist factions until liberation of eastern Aleppo areas in late 2016.

Held for over a year, he said, in solitary confinement most of that time, he said.

In mid 2017, I saw an underground prison in that terrorist-occupied hospital complex, and saw the cells he would have been held in:

Solitary confinement was a narrow, suffocating, cement and metal cell just wide enough for an adult to fit in. At best he could probably sit, knees to chest" but not lie down.

He was one of many civilians kept in such horrific circumstances. He started to cry when I asked him questions about this unjust incarceration, so I didn't push much beyond asking the very basics.

This man is traumatized, probably for life.

These terrorism was done by terrorists backed by the West, who still dare to call them "rebels".

When interviewing others today, on a variety of issues, including rebuilding in Aleppo, whenever the matter of the terrorists came up they were clear that all of the terrorists, whatever name they go by (Free Syrian Army, etc) are the same, something I've heard over and over again around Syria. And it's logical, because these thieves and criminals all commit acts of terrorism, whether shelling and sniping civilian areas, holding civilians hostage, starving them, torturing them, beheading them"

From my article on liberated Aleppo:

""in the Eye Hospital complex, I passed a building marked as the headquarters of the Tawhid Brigade, and a building marked on an outside wall with the writing, "The Sharia court in Aleppo and its countryside," before entering and descending to another underground prison.

Related Topic(s): Al-Qaeda; Beheading; Execution; Killing; Liberation; Media; Militarization; Syria; Terrorist Acquittals; Torture; (more...) Western Media, Add Tags  (less...)
Add to My Group(s)
Go To Commenting
The views expressed herein are the sole responsibility of the author and do not necessarily reflect those of this website or its editors.