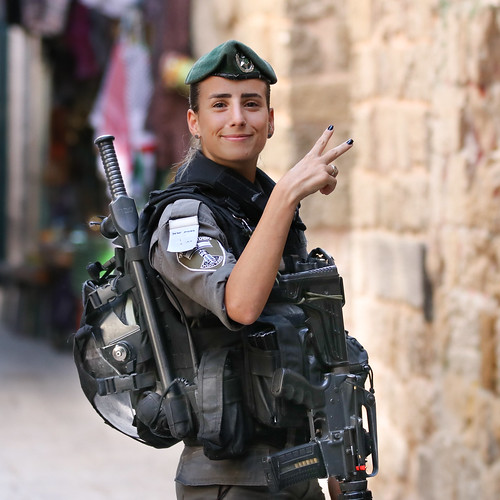 Canadian law makes it illegal to recruit soldiers for a foreign state. But, the line between enticing impressionable young people to oppress Palestinians and formal recruitment is unclear.

Whether or not there is a formal plan, this is how it appears to work: the elementary schools hold performances by Israeli military bands, organize fundraisers for groups supporting non-Israeli 'lone soldiers' and celebrate the IDF in other ways. As the kids move through high school, former and current Israeli soldiers talk to them about the IDF, which sometimes appears part of the Israeli consulate's recruitment drives.

Netivot HaTorah elementary school promotes the IDF and non-Israelis who join it. A January Netivot HaTorah Facebook post explained that a "'donut day' fundraising initiative raised over $750 for an organization called Garin Chayalim a program that supports IDF lone soldiers." A decade ago the school's president, Dov Rosenblum, reportedly boasted to the Canadian Jewish News that "at least 15 alumni serve in the IDF."

Bialik Hebrew Day School also promotes the IDF. Its website notes, "Tzedakah programs such as Shai Le'chayal help students feel a sense of responsibility to the Israeli community by sending gifts to Israeli soldiers. Similarly, having the opportunity to interact with IDF Band soldiers, who visit to perform for the school, reinforces these feelings."

The Toronto Heschel School had the IDF Nachal Band play last September and organizes other initiatives supportive of the Israeli military.

At Leo Baeck an Israeli emissary spends a year at the Toronto elementary school and when they return, noted the Canadian Jewish News, "engages with students by way of live video chat from their Israel Defence Forces barracks dressed in their military uniforms." Students also pay "tribute to Israel's fallen heroes" and fundraise for Beit Halochem Canada/Aid to Disabled Veterans of Israel, which supports injured IDF soldiers.

Leo Baeck and the other elementary schools feed students to high schools that promote the IDF and joining that force. The IDF Orchestra has performed at TanenbaumCHAT and Canada's largest private high school organizes fundraisers for Israeli military initiatives. Last week its Facebook described "an effort to raise money for the IDF. Thanks to the enthusiasm and generosity of our students and staff, we are happy to report that members of an army base in the south of Israel now have a nice spot to sit and enjoy their version of '10-minute break.'"

The school holds regular "IDF days." A summary of one in January noted, "Shavuah Yisrael continued today with @IDF day. The @tanenbaumchat community under the leadership of our Schlichim [Israeli emissaries] Lee and Ariel showed their support for the Israel Defence Forces by wearing green, eating green and donating green! Proceeds from the delicious green-sprinkled donuts that were sold during 10-minute break are being donated to help the well-being of Israeli soldiers on active duty on behalf of TanenbaumCHAT thru the Association for the Soldiers of Israel - Canada."

The school's website advertises a fund that assists students wanting to join the IDF. It notes, the "Continuing Studies in Israel Judy Shaviv Memorial Fund 'Keren Yad Yehudit' assists graduates to serve in the IDF, study or volunteer."

The high school also celebrates graduates who have served in the IDF and has them speak about joining the Israeli military. According to its site, "During Shavua Israel (Israel Week) in February 2020, Seth Frieberg '08 [graduate] spoke to students about his experiences as a Lone Soldier in the Israel Defense Forces. Bringing into focus his personal connection to Israel, he noted that 'this was basically 14 months where every day I was doing something that, for me, was a meaningful and substantial way to give back to Israel.'"

Alongside the Israeli Consul General, serving Israeli colonels have also spoken at the school. In May 2019 Colonel Barak Hiram spoke to the students about "being a new recruit and a seasoned commander in the Golani Brigade."

Serving IDF soldiers also speak at Toronto's Bnei Akiva. Some of the high school teachers biographies state that they served in the Israeli military and the school celebrates the Israeli military in other ways. "Love Bnei Akiva?! Love the IDF?! Come run the Jerusalem Marathon with us! Bnei Akiva has partnered with Tikvot and together we are raising funds to help injured IDF soldiers and terror victims recuperate!", reported a 2018 school Facebook post.

Bnei Akiva honours alumni who served in the IDF on its webpage. "Bnei Akiva Schools is proud to honour our alumni who have served courageously in the Israel Defense Forces", its website explains. Its LinkedIn profile notes, "upon graduation, students typically spend at least one or more years of study in Israel, and many serve in the IDF." The school's Wikipedia page is even more blunt: "the school strongly encourages graduates to attend the IDF in Israel."

Related Topic(s): Israeli-palestinian, Add Tags
Add to My Group(s)
Go To Commenting
The views expressed herein are the sole responsibility of the author and do not necessarily reflect those of this website or its editors.