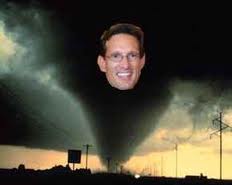 House Majority Leader Eric Cantor is not a popular man these days.  He disappointed supporters by his staunch support of the Ryan plan to turn Medicare into a voucher system, a move that is almost universally unpopular with Republicans and democrats.  Then in a bizarre move that reveals a mean

House Majority Leader Eric Cantor is not a popular man these days.  He disappointed supporters by his staunch support of the Ryan plan to turn Medicare into a voucher system, a move that is almost universally unpopular with Republicans and democrats.  Then in a bizarre move that reveals a mean streak that rivals Ebeneezer Scrooge, Cantor suggested that any funds given to aid tornado victims must be offset first by cuts to social programs.

"While much of Joplin, Mo., is still under rubble from a devastating tornado, conservatives in Congress are starting to argue for a tougher approach to disaster aid, demanding that any funding be offset by cutting federal money elsewhere.

"Disasters will no longer be considered "emergencies" if conservatives win this battle to redefine the way Congress funds aid packages for states and cities stricken by natural and man-made catastrophes."

Allen reports that President Obama, who is otherwise engaged outside the country, has not asked for any emergency funds. He quotes Cantor spokesman Brad Dayspring ...

"Obviously the people of Joplin and Missouri are facing a terrible tragedy, and our hearts and prayers are with the victims and their families," Dayspring said. "Federal spending must be prioritized, and clearly emergency funding for disasters such this are an urgent priority -- and Congress stands ready for a request for funding from President Obama.

"More broadly, [the Federal Emergency Management Agency] believes that the Disaster Relief fund that Congress uses to pay for these emergencies will run out of money before the end of the fiscal year, which is why we have already approved a bipartisan amendment to terminate programs in order to ensure that money is available to help people coping with other tragedies like this one without adding to our debt."

So if you're a newly homeless Joplin citizen, without a car to get to work or perhaps with only a mass of rubble where your place of business once was, don't expect any food stamps or assistance if Cantor has his way. Nice little political football you got there, Eric. Don't put all your eggs in one wind-damaged basket -- wildfire season is just around the corner! Hold out some of that love for the people of California and Colorado!

Maybe the dog bit him or something. Cantor also is in a mad rush to reconstruct The Patriot Act, forcing a vote in Congress on it's extension (may provisions expire this week) before Members leave for Memorial Day. Not going to make him any friends in Congress or on the street.

And all this follows his disgraceful comments about Arab culture at AIPAC earlier this week: "Sadly it is a culture infused with resentment and hatred. But it is this culture that underlies the Palestinians' and the broader Arab world's refusal to accept Israel's right to exist as a Jewish state. And this, this [repeated for emphasis], is the root of the conflict between Israel and the Palestinians, it is NOT about the '67 lines."

Talk about alienation, Cantor could write a book about what he doesn't know about politics and diplomacy. Hey Teabaggers, how do you like him now?

Kathy never expected a career in radio as a talk show producer. Born and raised in Atlanta, Georgia, Kathy was completing her nursing degree when in 2001 - in an emergency - she was asked to fill in as the producer of Mike's program. Within a few (more...)
Related Topic(s): Disasters; Food; Homelessness; Republican, Add Tags
Add to My Group(s)
Go To Commenting
The views expressed herein are the sole responsibility of the author and do not necessarily reflect those of this website or its editors.