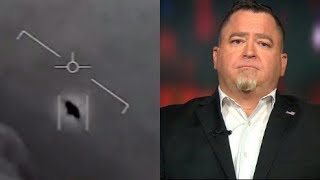 "The day of final UFO revelation is at hand! Glory! The government heroes in the shadows have stepped forward with the good news! All hail! Let us praise these insiders and bow down! Our efforts have not been in vain!"

No kid gloves, no fawning gratitude toward sources.

For far too long, government insiders who offer UFO "revelations" have been given a free pass.

They should be treated like any other sources for breaking stories. "Your information is fascinating, but I have lots of questions about you and your background."

There is a history of these insiders spreading disinformation or lies mixed with truth. This is how intelligence and propaganda operatives work. For instance, they could present tidbits about actual UFO sightings along with false claims about recovering "alien bodies." Those latter claims would be part of their covert agenda.

Suppose secret government/corporate programs have been using the stolen work of Tesla and other outlier researchers to achieve advanced propulsion technology? They cover up that fact by spinning tales about alien ET tech. I'm not asserting that's what happened, but it would illustrate why they would float lies...

Journalism -- by which I mean independent journalism -- should be miles past the point of asking softball questions and naively accepting "breakthrough revelations" from government sources.

In the wake of recent NY Times UFO disclosures from Luis Elizondo, a former intelligence operative who headed up a secret Pentagon program to study UFOs, many questions arise. Not one reporter who has gained access to Elizondo has publicly queried him at length about his suspect background in the intelligence community.

It would be more than interesting to get serious answers from Mr. Elizondo. They would provide a new jumping off point for further investigation.

Vetting a government insider isn't easy. You ask many questions, you observe how he answers them, you keep pressing and probing and form your best assessment of the person. You don't just lie down and accept him running you over like a steamroller.

Here are questions Mr. Elizondo should respond to:

Mr. Elizondo, in your extensive high-level work as an intelligence case officer, did you ever plant stories in the press? False stories? If not, let me put it to you this way: if you had seen the value of planting a false story, in order to move a covert operation forward, would you have done it?

Mr. Elizondo, you resigned from the Pentagon in October. Almost immediately, you began revealing secret UFO information to the public and the press. What about your non-disclosure agreements with the government? You violated them, didn't you?

Related Topic(s): Luis Elizondo; Pentagon; Questions; UFOs; Whistleblower, Add Tags
Add to My Group(s)
Go To Commenting
The views expressed herein are the sole responsibility of the author and do not necessarily reflect those of this website or its editors.