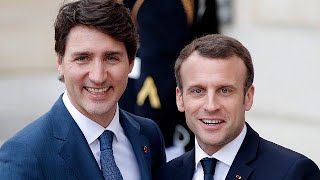 Leaders from Canada, France, and the United Kingdom officially added their voices to the universal condemnations that have rained down on the White House for Trump's abusive decision to separate undocumented families as they cross the border into the United States.

The leaders are now calling out the Trump-made humanitarian crisis as "shocking," "disturbing" and "wrong."

Until Trump, it would have been unthinkable for those three allies, who are among the oldest and closest international friends United States has, to openly and aggressively denounce U.S. tactics.

But this year has featured endless condemnations as Trump has not only shocked the world with his abusive campaign against families, but has needlessly picked fights with allies Canada, France, and the U.K. as he wages a reckless trade war.

Now the international attention has been riveted on searing images and audio clips of infants and toddlers ripped away from their parents, as Trump tried to use them as political leverage to get funding for a border wall he promised Mexico would pay for.

"On what we have seen in the United States, pictures of children being held in what appear to be cages are deeply disturbing," British Prime Minster Theresa May announced. "This is not something that we agree with, this is not the United Kingdom's approach."

From Canada, Prime Minister Justin Trudeau was equally unequivocal. "What's going on in the United States is wrong," he said. "I can't imagine what the families living through this are enduring. Obviously this is not the way we do things in Canada."

And during a French television interview, Benjamin Griveaux, a French government spokesman, said the European Union and France "do not share the same model of civilization" as America. "Clearly we don't share certain values," noting that the images of children in cages were "shocking."

It was France, of course, that gave the Statue of Liberty to the United States as a gift on its 100th birthday.

Related Topic(s): Caging; Children; Condemnation; International; Trump Broken Promises, Add Tags
Add to My Group(s)
Go To Commenting
The views expressed herein are the sole responsibility of the author and do not necessarily reflect those of this website or its editors.