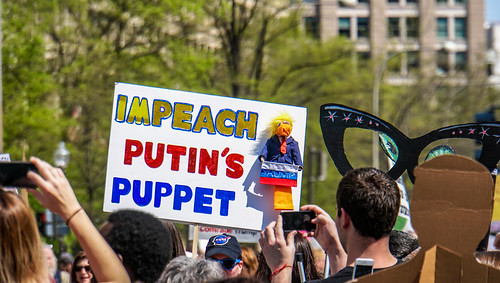 Democratic House leadership is sending not too subtle signals that they are very wary if not openly hostile to the idea of impeaching Donald Trump. The logic of the anti-impeachment Democrats is functionally indistinguishable from their Republican counterparts.

If you drill down on the Democratic logic and the Republican logic, there are different tactical considerations, but the common ground is the dominant factor. Both factions are contemptuous of Trump, albeit for different reasons, but are unwilling to challenge his legitimacy, fearing a loss of political currency.

The problem for Democratic House leadership is that their base and many of their caucus members, particularly the newer, more energetic members swept in by the midterm wave of 2018, want Trump confronted legally, formally, and immediately. Based on events, they have a right to expect it.

Two things are clear about the Mueller report from ten thousand feet. Special Counsel Robert Mueller did an exhaustively thorough job of documenting in detail expressly impeachable conduct by Donald Trump both before and after becoming president.

The second thing that is undeniably clear about the report is that Mueller is not just "handing the matter off to Congress" as many have suggested, but rather sounding for Congress a clarion call to action. It has often been said that Mueller alone cannot save the country. He appears to grasp how true that is.

The Rule of Law

The fundamental disconnect, the place where things are broken, is that political considerations are trumping the law. The moment that happens, we are a nation of men or women, as the case may be, but not a nation of laws.

The degree of legal deference being extended to Donald Trump is something the average American is totally detached from. When suspected of a crime, average Americans are virtually powerless to defend themselves against a system that all but ignores their rights and in many cases profits from injustice. If the law applies only to the disenfranchised, then it is nothing more than a tool of oppression.

The criminal acts set forth in the Mueller report are very serious. To simply say it is politically inconvenient to bring charges is an affirmation, a sanctioning, of lawlessness and does more to further the criminality than confront it. Political theater must not be allowed to replace the rule of law.

It's hard to imagine how Democratic leadership could be more risk-averse or put more faith in political posturing. The exact opposite of what the voters respond to and vote for. Voters like chutzpah and backbone. Principled stands get people down to the polls.

Impeachment is on the table because Donald Trump is facing the most serious allegations and charges ever leveled against an American president. If the Democrats fail to act, fail to use the powers expressly granted them by the very voters they hope to sway in next year's elections, they will be confirming the worst fears of their supporters and validating the sharpest attacks of their critics.

The decision to impeach has been made by Donald Trump. His words and actions have dictated the climate. If the Democrats rescue Trump through inaction, they run toward risk, not away from it.

Related Topic(s): Democrats; Impeach Trump; Trump Insults; Trump Scandal, Add Tags
Add to My Group(s)
Go To Commenting
The views expressed herein are the sole responsibility of the author and do not necessarily reflect those of this website or its editors.