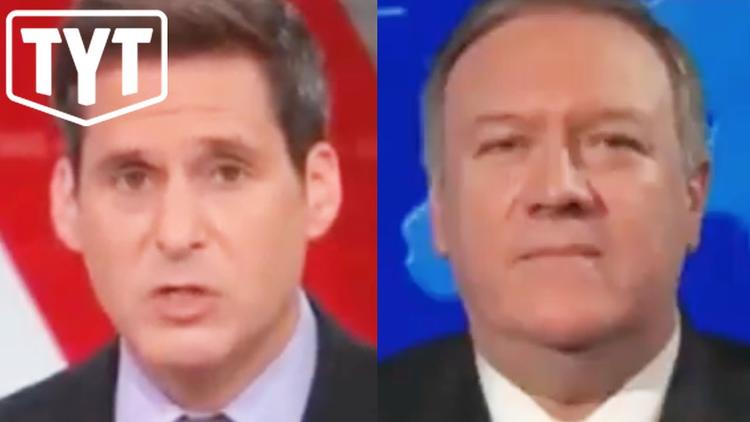 When he was in the House of Representatives, Mike Pompeo bothered Hillary Clinton half to death over the deaths of the US ambassador to Libya and three colleagues in 2012. Since Clinton was not in charge of military operations, nothing that happened there was attributable to her and almost everything Pompeo alleged was a lie. But he and his fellow Tea Party Republicans wanted to blacken Ms. Clinton's reputation because they knew she would eventually run for president and they wanted her wounded.

Rep. Pompeo dared to allege that "Clinton's foreign policy has been a failure for America."

He certainly is the most corrupt. Trump actually had to fire the inspector general for the state department to stop his investigation of Pompeo's personal use of government funds.

Pompeo's appearance at the Republican National Convention from abroad is another instance of tremendous corruption, defined as using US government assets for personal gain. In this case the asset is the prestige of the secretary of state, which previous incumbents have zealously kept away from party politics. Pompeo thinks of himself as secretary of state for Evangelical Americans, not for all Americans. He once said that the Rapture is near; that is the belief, the Encyclopedia Britannica tells us, "that both living and dead believers will ascend into heaven to meet Jesus Christ at the Second Coming (Parousia)."

Here are three humiliating failures of Pompeo as secretary of state

1. A couple of weeks ago, Pompeo tried to browbeat the other 14 members of the United Nations Security Council into sanctioning Iran. First, he made an attempt to stop a provision of the Iran nuclear deal from coming into effect. It specified that the UNSC arms embargo imposed on Iran in 2007 would end on October 18, 2020. The US proposal to extend the embargo found support only with the Dominican Republic, population 10 million, which depends on the US for its economy. It was rejected by Russia and China, and everyone else abstained, which is to say, they would not support the US. Managing to have almost the entire UN Security Council choose Iran over the US, including allies such as Britain, France, Germany and Belgium, made it clear that under Trump and Pompeo, the US is no longer the leader of the free world.

Then last Friday, Pompeo tried to insert himself back into the Joint Comprehensive Plan of Action, the Iran nuclear deal that Trump and Pompeo breached in 2018. Pompeo tried to invoke a clause of the JCPOA that allowed any of the signatories to demand a return to UNSC sanctions ("snapback") if Iran did not live up to its obligations. Iran has largely observed the letter of the agreement, but after Trump broke the treaty and imposed what amounts to a complete trade and financial embargo on Iran, Tehran tinkered with the requirements at the margins as a way of pressuring Europe to defy Trump and engage in the promised trade with Iran. Iran gave up 80% of its nuclear enrichment program to get the sanctions lifted, but then got vastly increased sanctions instead. Europe is too afraid of US Treasury Department third-party sanctions to trade with Iran.

This time France, Germany and Britain didn't just abstain. They issued a communique slapping Pompeo back into yesterday: "France, Germany and the United Kingdom note that the United States ceased to be a participant in the JCPOA in the wake of its withdrawal from the accord [in 2018]." They could "not support this initiative, which is incompatible with our current efforts to support the JCPOA ... We remain engaged in favor of the JCPOA in spite of major challenges engendered by the withdrawal of the United States, and we are convinced that we must treat the question of the systematic non-compliance by the Iranians with their obligations under the JCPOA via a dialogue between the participants in the accord."

Yesterday, Russia and China asked the current president of the UNSC, Indonesia, for a ruling on Pompeo's demand for snapback. Indonesian ambassador to the UN, Dian Triansyah Djani, said that because of an entire lack of consensus on the council, "we are not in a position to decide on a new action."

Actually, he would more accurately have said that there is a consensus not to take up the US proposal.

2. Syria. Back in 2018, Pompeo explained his goals for that country: "defeating ISIS, which was once our primary focus, continues to be a top priority, but it will now be joined by two other mutually reinforcing objectives. These include a peaceful and political resolution to the Syrian conflict and the removal of all Iranian and Iranian-backed forces from Syria."

Related Topic(s): Iran; Jcpoa; Sanctions; Secretary Of State; Secretary Of State Mike Pompeo; State Department; Syria, Add Tags
Add to My Group(s)
Go To Commenting
The views expressed herein are the sole responsibility of the author and do not necessarily reflect those of this website or its editors.