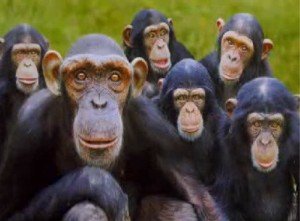 It's too-many-monkeys-Tuesday, Truthseekers!  Wow, what a news-day.  The corporate media has been beside themselves trying to juggle all the juicy tidbits of the Blagojevitch conviction, the new al-Quada threat, the riots in Greece, the nuclear crisis at Los Alamos, the hotel bomb in Kabul, the Casey Anthony trial, the resignation of Herman Cain staffers, and Obama's plea for patience with the staggering economy.

And, if that isn't enough, check out Presidential hopeful and Christian lunatic Michelle Bachmann's latest verbal gaffes. It's one thing to confuse John Wayne, legendary film star with John Wayne Gacy, legendary serial killer. But if she can't correctly discuss even the most basic facts about our nation's history, what does that say about her political bona fides? In her latest assault on American history, Bachmann claims the founding fathers worked tirelessly on the issue of slavery until it was ended. That would've been in the 1770s.

"We know we were not perfect," Bachmann screeched. "We know there was slavery that was still tolerated when the nation began. We know that was an evil and it was a scourge and a blot and a stain upon our history. But we also know that the very founders that wrote those documents worked tirelessly until slavery was no more in the United States."

The founding fathers ended slavery. Gotcha. Guess it only took them 100 years. Seems she's forgotten that pesky ol' Thomas Jefferson/Sally Hemming tidbit. And that Abraham Lincoln (hardly a founding father) wrote the Emancipation Proclamation in 1863. During the Civil War -- not the Revolutionary War.

It's hard to keep your facts straight, what with all that Botox floating around in your frontal lobe. We understand.  There's American Exceptionalism, and there's American Revisionism. Seems that Michelle has thrown both into the mix-master and has come up with her own special brand of US History. Dubya Redux, anyone?

Another GOP Presidential hopeful, extreme Libertarian nutball Ron Paul, made a little news himself with his solution to the US debt problem -- we should just declare bankruptcy.

Now, there's a campaign slogan you don't often see on a bumper sticker.  "Vote for Me and I'll Bankrupt the Nation!"

Too many monkeys, indeed!

Kathy never expected a career in radio as a talk show producer. Born and raised in Atlanta, Georgia, Kathy was completing her nursing degree when in 2001 - in an emergency - she was asked to fill in as the producer of Mike's program. Within a few (more...)
Related Topic(s): History; Michele Bachmann; Monkeys, Add Tags
Add to My Group(s)
Go To Commenting
The views expressed herein are the sole responsibility of the author and do not necessarily reflect those of this website or its editors.