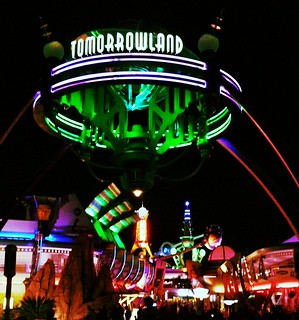 Walt Disney began his career, or at least first came to major public notice, with the fantasy creature, cartoon character, Mickey Mouse. While over the years Disney Studios has gone well beyond fantasy, and well beyond Mickey Mouse, it still does like to deal in fantasy from time-to-time. And so it has done in Tomorrowland, a sort-of science fiction, past-time-present-time-future-time, essay into the future of the Earth and human civilization. (Actually, The New York Times reviewer, A.O. Scott, took the movie to task for "its blithe disregard for basic principles of science-fiction credibility.")

The story is complex and I must admit that I wasn't able to follow every one of its ins and outs. But it starts in a time past at the 1964 New York City World's Fair (with, among other things, a good deal of product placement). It then seems to come forward to just about the present or perhaps just a bit into the future, with the central character, a child science-junkie in 1964, now a grown-up super science/electronics junkie. And then it goes into two versions of a future place called -- you guessed it -- "Tomorrowland." When it first appears, Tomorrowland is a bustling metropolis, set in the middle of one-is-not-sure where, sometime in the future. It is all clean and bright and white, occupied by a very diverse population of well-fed, seemingly well-educated, and very busy people. It bears some resemblance, from a distance at least, to the Disney World Magic Kingdom (my, what a coincidence).

Tomorrowland in Hong Kong Disneyland. Yes, by golly, there really is a Disney .Tomorrowland,. in the artifical city founded by Imperial Britain in 1841, Hong Kong.
(Image by Castles, Capes & Clones)   Details   DMCA

Very importantly, allusions are made to the fact that in our time, more-or-less, the Earth and we are succumbing to climate change, environmental degradation, filth, over-population, water shortages, and so on and so forth, all of which are inevitably leading to the "Sixth Extinction." (Pointedly, at least pointedly to me, excluded from the list are Permanent War, which now seems to be permanently with us, and the threat of nuclear war/annihilation and its probable successor, nuclear winter [which seems to be making a comeback as a major threat].)

As I said, the plot is complex and I wasn't able to follow all of its twists and turns. In particular, I was confused by the fact that when we first see Tomorrowland, as noted, everything is working beautifully. But then when we see it again at the end of the movie, as the setting for the de rigeur mano-a-mano that just seems to be an absolute MUST for such movies, between the hero, played by George Clooney, and the villain (who is a villain, but does not for the most part come across as villainous) played by the well-known British character actor Hugh Laurie, it is, while still white, run-down and deserted, with trash blowing all around. I'm sure that that state of affairs is explained somewhere, but I missed it.

At any rate, what we do get that appears in very few post-apocalypse movies (which seem to be growing in number every year -- wonder why?) is a very uplifting new beginning: a large, very diverse, group of seemingly very bright, very well-educated, very good-looking, young adults are recruited to go forth in the world, show people the positive way, somehow restore Tomorrowland, and then, I guess, spread the good word and the good works, all around the world (that is assuming that indeed the whole world did succumb to climate change, species extinction, environmental degradation, and so-on-and-so forth).

Tomorrowland and similar works aptly reflect the pervasive sense of impending doom gripping the world, but as works of artistic creativity they also accurately mirror the complete bankruptcy of capitalist culture and the fact the system cannot even conceive of a rational (let alone moral) way out of the crisis it has itself created.

So. Very positive. Very upbeat. Very supposedly uplifting. Yes, somehow, the Earth and human civilization will be saved, renewed. BUT, and it's a very big BUT, neither the principal cause of the decline and fall of civilization nor what would be needed to create a Tomorrowland that could actually work are mentioned, even in passing. And that cause of course is capitalism, as the principal form of economic organization in the contemporary world. As has been said many times, the principal goals of the capitalists are the making of profits from capital and the accumulation of ever-increasing amounts of capital with which to make evermore profit. The ultimate outcome of capitalism, which depends upon the ever-increasing exploitation of both human and natural resources, is its suicide.

Disney, of course, can, and could, have none of this. Which is what, ultimately, makes this movie a fantasy. The on-coming destruction of the Earth as we know it, which is referred to in the movie, is "cause-less." It, apparently, just happens. As for the reconstruction of the Earth, which is to be achieved by the legions of earnest young people recruited at the end of the film, it is seemingly to be achieved without any system of social organization and with no mention of the resources -- physical, organizational, economic, and political -- which will/would be needed to achieve the desired end. To say nothing of the fact, that if this reconstruction were to be tried under capitalism, rather than the alternate form of socio/political/economic organization known as communism, exactly the same outcome would eventually be realized. And that, of course, is the definition of insanity.

Postscript: The day after I wrote this column, the following item appeared in The New York Times: "Pink Slips at Disney. But First, Training Foreign Replacements." At Disney World, Florida, long-time hi-tech U.S. employees have been replaced by lower cost temporary immigrants, coming in on "H1-B" visas. The latter were originally intended to be used to bring in foreign workers to fill jobs that cannot otherwise be filled in the U.S. But of course, these particular jobs were already being held by U.S. workers. Right here in the Magic Kingdom we can see the true Tomorrowland at work: capitalism -- and profits -- uber alles.

Steven Jonas, MD, MPH, MS is a Professor Emeritus of Preventive Medicine at StonyBrookMedicine (NY) and author/co-author/editor/co-editor of over 35 books. In addition to his position on OpEdNews as a "Trusted Author," he is a Senior Editor, (more...)
Related Topic(s): Capitalism; Civilization; Decline; Economic; Fantasy; Insanity; Movies, Add Tags
Add to My Group(s)
Go To Commenting
The views expressed herein are the sole responsibility of the author and do not necessarily reflect those of this website or its editors.