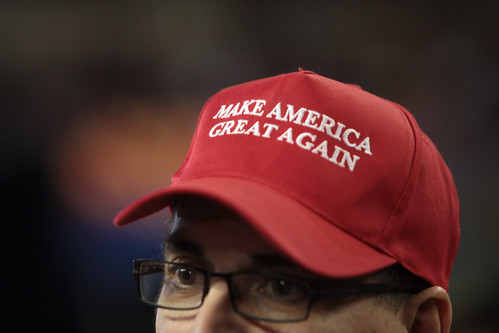 Let's skip the obvious. Leave aside, for instance, the way Donald Trump's decision to launch 59 Tomahawk cruise missiles against a Syrian air base is but another example of what we already know: that acts of war are now the prerogative, and only the prerogative, of the president (or of military commanders whom Trump has given greater authority to act on their own). Checks, balances? I doubt either of them applies anymore when it comes to war, American-style. These days, the only checks written are to the Pentagon and "balance" isn't a concept outside of gymnastics.

Meanwhile, Donald Trump has learned that every wild defeat at home, every swirling palace intrigue that would make a tsar blush, can be... well, trumped by dumping 59 cruise missiles or their equivalent in some distant land to save the "beautiful babies." (Forget the babies "his" generals have been killing.) Launch the missiles, send in the raiders, dispatch the planes, and you'll get everyone you ever tweet-smashed -- including Hillary, John, Nancy, Marco, and Chuck to applaud you and praise your acts. They'll be joined by the official right wing (though not the unofficial one), while the neocons and their pals will hail you as the Churchill of the twenty-first century. Or at least, all of this will be true until -- consult George W. Bush and Barack Obama on this -- it isn't; until the day after; until, you know, the moment we've experienced over and over during the last 15 years of American war-making, the one where it suddenly becomes clear (yet again) that things are going really, really wrong.

While we wait, here's a suggestion that came to mind as I read the latest thoughts of TomDispatchregular retired Air Force Lieutenant Colonel William Astore on the military-industrial complex in the age of Trump: Isn't it time to give the corporate sponsorship of war its just due? After all, there's hardly an object, building, museum, stadium, or event in civilian life these days that doesn't have corporate sponsorship plastered all over it and built into it. In my hometown, for instance, baseball's New York Mets play at Citi Field, while football's Giants and Jets spend their seasons at MetLife Stadium. Given the role that America's giant weapons makers play in our wars, and the stunningly successful way they spread their wares around the planet, isn't it time for the growing war powers of the commander-in-chief to be translated into a militarized version of sponsorship?

Shouldn't Raytheon, the maker of those 59 cruise missiles that Donald Trump used recently, be given full credit so that media coverage of the event would refer to the Raytheon Syrian Tomahawk Chop? Shouldn't the next set of drone attacks in Yemen be called the General Atomics MQ-9 Reaper Harvesting? Shouldn't any future strikes by the most expensive weapons system on this or any other planet be labeled the Lockheed F-35 Lightning Joint Strike Fighter Storm? We're in a new age of corporate enhancement. Isn't it time for war to adjust and for the military-industrial complex to get the credit it so richly deserves? Tom

What Does an "America-First" Foreign Policy Actually Mean?
Putting the U.S. Military First, Second, and Third
By William J. Astore

What does an "America-first" foreign policy look like under President Donald Trump? As a start, forget the ancient label of "isolationism." With the end of Trump's first 100 days approaching, it looks more like a military-first policy aimed at achieving global hegemony, which means it's a potential doomsday machine.

Candidate Trump vowed he'd make the U.S. military so strong that he wouldn't have to use it, since no one would dare attack us -- deterrence, in a word. The on-the-ground (or in-the-air) reality is already far different. President Trump's generals have begun to unleash that military in a manner the Obama administration, hardly shy about bombing or surging, deemed both excessive and risky to civilians. Last week, 59 U.S. cruise missiles (value: $60 million) pummeled an airbase in Syria, a profligate response to a chemical weapons attack in that country which may yet lead to further escalation. Meanwhile, U.S. weapons are to be sold to Sunni monarchies in the Persian Gulf with less concern than ever for human rights abuses, and the Saudis will be provided with yet more of the support they demand for their devastating war on civilians in Yemen. Doubtless further military interventions and escalations across the Greater Middle East are on that classic "table" in Washington where "all options" are supposedly kept.

Most Americans believe the spin that the U.S. military is all about deterring and preventing attacks on the homeland, especially those orchestrated by "radical Islamic terrorism." Sold as a deterrent, Washington's national security state has, in fact, exploded into something that increasingly resembles a mechanism for permanent war. Ignorant of the most basic military strategy, impulsive and bombastic, its present commander-in-chief is being enabled by bellicose advisers and the men he calls "my generals," who dream of ever bigger budgets. (Even Trump's promise of a $54 billion boost to Pentagon spending this coming fiscal year isn't enough for some senior military officers.)

The Realities of Trump's New Era of Winning

Welcome to Trump's new era of winning. It's not really about ending wars, but exerting "global reach/global power" while selling loads of weaponry. It promises to spread or prolong chaos in Iraq, Yemen, and possibly Iran, among other countries. In the Greater Middle East, U.S.-led efforts have produced a war-torn Iraq that's splitting at the seams. U.S. drone strikes and support for an ongoing Saudi air campaign have left Yemen lurching toward famine. Syria remains a humanitarian disaster, torn by war even as additional U.S. troops are deployed there. (The Pentagon won't say how many, telling us instead to focus on "capabilities" rather than boots on the ground.) Further east, the never-ending war in Afghanistan is, in Pentagon-speak, "stalemated," which means that the Taliban is actually gaining ground as a new Washington surge-to-nowhere looms. Looking west and south, Africa is the latest playground for the U.S. military's special ops community as the Trump administration prepares, among other things, to ramp up operations in Somalia.

To Trump and his generals, an "America-first" approach to such problems actually means putting the military first, second, and third. It helps that they can't imagine the actions of that military as destabilizing. (Possible future headline: Trump destroys Syria in order to save it.) According to General Joseph Votel, head of U.S. Central Command, for instance, the country that poses "the greatest long-term threat to stability" in the Middle East is Iran, a sentiment seconded by retired general James Mattis, the secretary of defense.

You might excuse the Iranians, as well as the Russians and the Chinese, for thinking differently. To them, the United States is clearly the most destabilizing entity in the world. If you were Chinese or Russian or Shia Muslim, how might U.S. military activities appear to you?