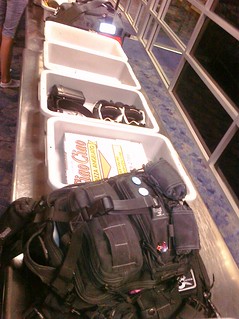 Item by item, moment by moment, we are shifted and changed.
(Image by AFresh1)   Details   DMCA

Rebecca Gordon's piece today triggered a little repressed memory of mine of a trip I took in 2003. Arriving at the airport, I turned my suitcase over to the ticket agent, only to be told that it had been singled out for special inspection. I was already running TomDispatch and I couldn't help wondering, somewhat nervously, if my activities had preceded me to the airport. I was directed to another spot in the terminal where I lifted the suitcase onto a table in front of a Transportation Security Administration agent. She promptly unzipped the bag, flipped it open, and front and center, face up atop my folded clothes, was a book that had "Unabomber" in big letters in its title. It felt as if a jolt of electricity had shot through my body and my eyes were bugging out of my head at my obvious stupidity. As if to confirm that feeling, the agent looked stunned, too. We were both silent for a too-long moment, contemplating the reckless passenger who had a book about the Unabomber conspicuously displayed in his bag. Then she said, "How is it?"

It was the last question I expected to hear and I stumbled far too quickly to respond with something like: "I don't know. I haven't read it yet. A newspaper asked me to review it." (All true, but in translation it clearly meant: "Hey, I know this looks terrible, but I'm a reputable book reviewer, not your basic terror-lovin' sorta guy.") Not much else was said, but believe me, my bag and backpack were inspected with a thoroughness that had to be seen to be believed. A second agent was even called in to lend a hand. In the end, the bag was cleared for departure and, chastened, I headed for the security line, already unfastening my belt.

And there's a little p.s. to this episode. Not so long after, I set out on another trip, this time carrying Tariq Ali's book, Clash of Fundamentalisms: Crusades, Jihads, and Modernity, with me. As I was packing, I noticed that its cover featured George Bush's face superimposed on Osama bin Laden's. It was a striking image and in a split second I was slipping the jacket off the book to leave at home. If I got singled out again, I had no intention of letting an agent find a cloned bin Laden-Bush image among my possessions.

In this way, microscopic act by microscopic act, whoever we are, whatever we think we think, we can't help but absorb the limits, the directives, the intentions that our ascendant national security state wants to impose on us. In all sorts of devious ways, without serious thought, in acts that hardly register, we make their agendas, their surveillance, their searches our own; we turn their taste in reading and thinking and expressing themselves into ours. Someday, there's a great book to be written on all the hidden triumphs of that ever-more powerful shadow state that has embedded its version of the American way of life inside our own. In the meantime, check out TomDispatch regular Rebecca Gordon's account of how we create our own no-fly lists and become our own no-fliers in the unfriendly skies of twenty-first-century America. Tom

It was August 2002. My partner Jan Adams and I were just beginning our annual pilgrimage to Massachusetts to visit my father and stepmother. At the check-in line at San Francisco International Airport, we handed over our driver's licenses and waited for the airline ticket agent to find our flight and reservation. Suddenly, she got a funny look on her face. "There's something wrong with the computer," she said. "I need to talk to my supervisor."

So began a day of confusion and fear, followed by several years of indignation, frustration, and litigation, as we struggled to find out why -- as the agent's supervisor soon informed us with a similarly strange look on her face -- we'd both "turned up on the FBI's no-fly list." Her eyes grew wide as she looked us over. "I don't understand it," she said. "You don't fit the profile."

She was right, of course. A pair of middle-aged, middle-class, white lesbians did not fit the profile of the "Arab terrorists" she expected the no-fly list to contain. What she didn't know was that our suitcases held hundreds of copies of War Times/Tiempo de guerras, a free, bilingual antiwar tabloid we'd helped start. Could aging pacifists have fit the danger-to-America profile?

You might think that the no-fly list is old news, a relic of the panicked early days following the 9/11 attacks. In fact, as recently as 2012, there were still more than 21,000 names on the list, and it seems unlikely to have gotten any shorter since then, though we do know of at least four names that, with some legal prodding from the Center for Constitutional Rights (CCR), were recently removed from it: Muhammad Tanvir, Jameel Algibhah, Naveed Shinwari, and Awais Sajjad. All four men were American citizens or permanent residents who ended up on the list as retaliation for refusing to become FBI informers and tell tales on their neighbors and others in Muslim communities in this country. For years, they could not visit wives, children, or ailing relatives in countries like Pakistan and Yemen.

According to a suit filed by the CCR in 2014, as reported by Conor Friedersdorf in the Atlantic, Jameel Algibhah's troubles began in 2009, when he refused the FBI's request to infiltrate a mosque in Queens, New York. The legal complaint continues:

So the FBI retaliated. Since 2010, Jameel Algibhah has been unable to visit his wife and three daughters in Yemen. Not content with preventing Algibhah and the other three from flying, the FBI began interviewing their friends, family, acquaintances, and employers, generating suspicion about them. "They lost jobs, were stigmatized within their communities, and suffered severe financial and emotional distress," reports the CCR.

In June 2015, just before their case was to go to court, the men received letters from the government officially informing them that their names had been removed from the list. The CCR believes that "the letters are a de facto acknowledgment that the men never posed a security threat of any kind and that the FBI only listed them to coerce them into spying on their faith community."

The letters restored the men's right to fly, but they didn't make up for years of stigma and distress. So the four continued their litigation, but on September 3rd, a federal judge dismissed their suit, which means that they will not get any recompense for the damage done to their lives. In June 2015, the Associated Press reported that Assistant U.S. Attorney Ellen Blain argued the case should not continue, in part for reasons of "national security" and because "neither the law nor the evidence supported finding the agents personally liable for violating the plaintiffs' constitutional rights." In fact, the government's original motion to dismiss the suit argued that "there is no constitutional right not to become an informant." That's right. Your government says that if it wants to make you a snitch, you have no right to refuse.

Given that these four men without criminal records or any other obvious reason for government suspicion were, like my partner and me, put on the no-fly list leads me to wonder about the other 21,000 people on that list, including at least 500 Americans. (In fact the overall number could turn out to be as high as 44,000, according to "60 Minutes," or even 48,000, according to the Associated Press. We just don't know because, like so much else in our new post-9/11 world, information about the list remains classified.)

What did all those other people on the list do or refuse to do? How have their lives been damaged? And how dangerous are they really? My partner and I certainly had no intention of turning our airplane into a terrorist weapon. What are the odds that any of the other 21,000 or 44,000 or 48,000 people did? And if potential airplane bombers or hijackers do exist, what are the odds that any of them are actually on the FBI's list? After all, Umar Farouk Abdulmutallab, the "underwear bomber," wasn't. Neither was the infamous "shoe bomber" Richard Reid. All this list-making has been marked by an odd -- and dangerous -- combination of intrusion and incompetence.

Related Topic(s): National Security; No-Fly List; TSA, Add Tags
Add to My Group(s)
Go To Commenting
The views expressed herein are the sole responsibility of the author and do not necessarily reflect those of this website or its editors.