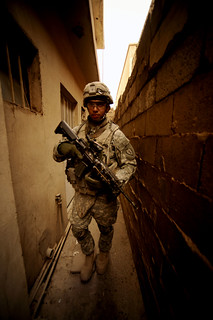 With no .Plan B. do we just keep soldiering on?
(Image by DVIDSHUB)   Details   DMCA

On June 13th, Greg Jaffe and Missy Ryan of the Washington Post reported what should have been big news (though it was hardly noted). In recent White House "debates" over a disastrously deteriorating situation in Iraq, President Obama's top military officials were dragging their feet on the question of what more the U.S. should do. No, they didn't want to put American boots on the ground inside Iraqi army units as spotters for U.S. air power or bring in the Apache attack helicopters, which are "lethal in urban combat but vulnerable to enemy ground fire." Clearly, they weren't ready to swallow the idea of more U.S. casualties in a spreading conflict leading nowhere fast. As one unnamed senior Pentagon official put it, "We have become very sensitized to the idea that we don't want to risk lives and limbs if there isn't a high probability of a payoff." According to Jaffe and Ryan, State Department representatives, in private, proved more eager than Pentagon officials to up the military ante in Iraq -- and that's not been everyday fare in Washington.

At a moment when the capital is full of calls for strengthening U.S. forces in that country and many Republican presidential candidates -- figures who are ready to back the military until death do us part -- are criticizing the Obama administration for not doing enough against the Islamic State, consider this news about a significant change in the mindset of the high command. You could perhaps claim that, in a crucial part of Washington, reality was finally setting in. If so, however, you would have to add a caveat: after all, the recent behind-the-scenes deliberations didn't end up producing a cutback in U.S. support for the Iraqis, but a further escalation of it. The president agreed to send 450 more U.S. personnel to a new base in Sunni-dominated Anbar Province on a training mission and left open the possibility of more. Meanwhile, General Martin Dempsey, Chairman of the Joint Chiefs, began to talk up the idea of building new training bases closer to the action in Iraq (which would mean hundreds or even thousands of additional U.S. personnel heading in-country).

In other words, even when reality takes hold, the drip, drip, drip of creeping escalation doesn't end. For those old enough to remember Vietnam, this is familiar stuff. Once you're on the first rungs of this escalatory ladder, there never seems to be any direction to go but up. Someday, historians will undoubtedly offer explanations for the combination of forces -- political and military, domestic and foreign -- that make the impulse to keep climbing so much more powerful than the impulse to descend, no matter what messages reality might be sending Washington's way. Read State Department whistleblower and TomDispatch regular Peter Van Buren's latest analysis of our third war from hell in Iraq and you can hardly doubt what direction on that ladder our leaders should be heading. Tom

Five Things That Won't Work in Iraq
When at First You Don't Succeed, Fail, Fail Again
By Peter Van Buren

In one form or another, the U.S. has been at war with Iraq since 1990, including a sort-of invasion in 1991 and a full-scale one in 2003. During that quarter-century, Washington imposed several changes of government, spent trillions of dollars, and was involved in the deaths of hundreds of thousands of people. None of those efforts were a success by any conceivable definition of the term Washington has been capable of offering.

Nonetheless, it's the American Way to believe with all our hearts that every problem is ours to solve and every problem must have a solution, which simply must be found. As a result, the indispensable nation faces a new round of calls for ideas on what "we" should do next in Iraq.

With that in mind, here are five possible "strategies" for that country on which only one thing is guaranteed: none of them will work.

1. Send in the Trainers

In May, in the wake of the fall of the Sunni city of Ramadi to Islamic State (IS) fighters, President Obama announced a change of course in Iraq. After less than a year of not defeating, degrading, or destroying the Islamic State, the administration will now send in hundreds more military personnel to set up a new training base at Taqaddum in Anbar Province. There are already five training sites running in Iraq, staffed by most of the 3,100 military personnel the Obama administration has sent in. Yet after nine months of work, not a single trained Iraqi trooper has managed to make it into a combat situation in a country embroiled in armed chaos.

The base at Taqaddum may only represent the beginning of a new "surge." General Martin Dempsey, chairman of the Joint Chiefs of Staff, has begun to talk up what he calls "lily pads," American baselets set up close to the front lines, from which trainers would work with Iraqi security forces. Of course, such lily pads will require hundreds more American military advisers to serve as flies, waiting for a hungry Islamic State frog.

Leaving aside the all-too-obvious joke -- that Dempsey is proposing the creation of a literal swamp, a desert quagmire of the lilypad sort -- this idea has been tried. It failed over the eight years of the occupation of Iraq, when the U.S. maintained an archipelago of 505 bases in the country. (It also failed in Afghanistan.) At the peak of Iraq War 2.0, 166,000 troops staffed those American bases, conducting some $25 billion worth of training and arming of Iraqis, the non-results of which are on display daily. The question then is: How could more American trainers accomplish in a shorter period of time what so many failed to do over so many years?

There is also the American belief that if you offer it, they will come. The results of American training so far, as Secretary of Defense Ashton Carter made clear recently, have fallen far short of expectations. By now, U.S. trainers were to have whipped 24,000 Iraqi soldiers into shape. The actual number to date is claimed to be some 9,000 and the description of a recent "graduation" ceremony for some of them couldn't have been more dispiriting. ("The volunteers seemed to range in age from late teens to close to 60. They wore a mish-mash of uniforms and boots, while their marching during the ceremony was, shall we say, casual.") Given how much training the U.S. has made available in Iraq since 2003, it's hard to imagine that too many young men have not given the option some thought. Simply because Washington opens more training camps, there is no reason to assume that Iraqis will show up.

Oddly enough, just before announcing his new policy, President Obama seemed to pre-agree with critics that it wasn't likely to work. "We've got more training capacity than we've got recruits," he said at the close of the G7 summit in Germany. "It's not happening as fast as it needs to." Obama was on the mark. At the al-Asad training facility, the only one in Sunni territory, for instance, the Iraqi government has not sent a single new recruit to be trained by those American advisers for the past six weeks.

And here's some bonus information: for each U.S. soldier in Iraq, there are already two American contractors. Currently some 6,300 of them are in the country. Any additional trainers mean yet more contractors, ensuring that the U.S. "footprint" made by this no-boots-on-the-ground strategy will only grow and General Dempsey's lilypad quagmire will come closer to realization.

2. Boots on the Ground

Senator John McCain, who chairs the Senate Armed Services Committee, is the most vocal proponent of America's classic national security go-to move: send in U.S. troops. McCain, who witnessed the Vietnam War unfold, knows better than to expect Special Forces operatives, trainers, advisers, and combat air traffic controllers, along with U.S. air power, to turn the tide of any strategic situation. His response is to call for more -- and he's not alone. On the campaign trail recently, Wisconsin Governor Scott Walker, for instance, suggested that, were he president, he would consider a full-scale "re-invasion" of Iraq. Similarly, General Anthony Zinni, former head of U.S. Central Command, urged the sending in of many boots: "I can tell you, you could put ground forces on the ground now and we can destroy ISIS."

Related Topic(s): American Foreign Policy; Iraq War, Add Tags
Add to My Group(s)
Go To Commenting
The views expressed herein are the sole responsibility of the author and do not necessarily reflect those of this website or its editors.