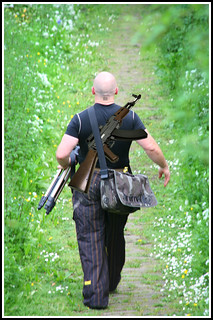 ""You want to profile America's mass killers? No need at all for the FBI or the national security state. You don't have to secretly read anyone's emails or check their phone metadata. You don't need to follow them on Twitter. All you have to do is narrow down the possibilities in a logical way by looking at the history of mass killing in recent years. That means, as a start, leaving aside half the population, since women make up close to 0% of American mass shooters.

So, start with men. Admittedly, that's a pretty broad category. Still, among men, you can narrow the field fast. Begin with age. Generally, mass killers are young. Unfortunately, this category isn't quite as blanket as the no-woman rule. Just recently, in what looked like a copycat mass killing -- a repeat of the 2012 shooting in an Aurora, Colorado, movie theater -- a mentally unstable 59-year-old white man in Lafayette, Louisiana, with a chip on his shoulder about women (as well as blacks), opened fire in a theater showing the new Amy Schumer hit, Trainwreck, a film drawing female audiences, and killed two women. Similarly, in February, a disturbed and mentally unstable 36-year-old white man, barred from owning guns, carried out a mass killing of seven in the tiny Missouri town of Tyrone. Nonetheless, when you're conjuring up the next mass killer, think young man (16-24) and think white.

Now, we're getting somewhere. One more obvious thing: look for someone carrying a gun, generally obtained quite legally -- most likely a semi-automatic pistol or an assault rifle -- or come to think of it, three or four or more weapons and lots and lots of ammo. Now, given the 300 million or so guns floating around this country and the spread of "right-to-carry" laws that let anyone bring lethal weaponry just about anywhere, this may not narrow things down quite as much as we'd like. But it should be helpful. And yes, there are other factors, too, that might aid you in setting your sights on the next mass killer. As Karen Greenberg, the director of the Center on National Security at Fordham Law and TomDispatch regular, points out today, these would undoubtedly include feelings of hopelessness and anger, a history of mental instability, depression, and drug or alcohol abuse.

In the grips of a much overblown panic about ISIS-inspired terror in the U.S., the government, Greenberg reports, is about to spend a pile of taxpayer money doing a version of what I just did. Here's my guarantee: it will cost you a boodle, most of which, as she makes clear, won't go where it might do some good -- that is, to helping unnerved or disturbed young men. And I'll also guarantee you one more thing: the massed thinking and resources of the national security state won't do much better than I've done above when it comes to the problem of identifying lone-wolf killers. But that state within a state will, as ever, emerge from the experience more powerful and more entrenched. And, as novelist Kurt Vonnegut might once have said, so it goes.

Dealing With Mass Killings in America
Funding Our Children, Not Our Wars
By Karen J. Greenberg

Imagine that you're in the FBI and you receive a tip -- or more likely, pick up information through the kind of mass surveillance in which the national security state now specializes. In a series of tweets, a young man has expressed sympathy for the Islamic State (ISIS), al-Qaeda, or another terrorist group or cause. He's 16, has no criminal record, and has shown no signs that he might be planning a criminal act. He does, however, seem angry and has demonstrated an interest in following ISIS's social media feeds as they fan the flames of youth discontent worldwide. He's even expressed some thoughts about how ISIS's "caliphate," the Islamic "homeland" being carved out in Syria and Iraq, might be a place where people like him could find meaning and purpose in an otherwise alienated life.

A quick search of his school records shows that his grades, previously stellar, are starting to fall. He's spending more time online, increasingly clicking on jihadist websites. He has, you discover, repeatedly read news stories about mass killings in the U.S. Worse yet, his parents own legally registered guns. A search of his medical records shows that he's been treated by a psychiatrist.

As a member of law enforcement, what exactly do you do now? You know that in recent years, mass killings have become an all-too-frequent part of American life. There were the Chattanooga military recruitment office shootings; the Charleston church killings; the abortive attack on a Mohammed cartoon contest in Garland, Texas; the Boston marathon bombing; the Sandy Hook school slaughter; and the movie theater shootings in Aurora, Colorado, and most recently, in Lafayette, Louisiana. Loners, losers, jihadis, racists -- label the killers as you will -- as a law enforcement agent, you feel the pressure to prevent such events from happening again.

Given the staggering array of tools granted to the national security state domestically since 9/11, it's a wonder (not to say a tragic embarrassment) that such killings occur again and again. They are clearly not being prevented and at least part of the reason may lie in the national security state's ongoing focus on "counterterrorism," that is, on Islamic extremism. For the most part, after all, these mass murders have not been committed by Islamic extremists. From the more than 100 deaths of this sort since the Aurora shooting three summers ago, only eight were killed by individuals inspired by Islamic radicalism.

Soon after the attacks of September 11, 2001, President George W. Bush and Attorney General John Ashcroft declared an all-out, no-holds-barred policy of terrorism "prevention." Another 9/11 was to be avoided at all costs and a "global war on terror" was quickly set in motion.

Domestically, in the name of prevention, the government launched a series of measures that transformed the American landscape when it came to both surveillance and civil rights. Yet despite the acquisition of newly aggressive powers of every sort, law enforcement has a woeful record when it comes to catching domestic mass murderers before the damage is done. In fact, a vanishingly small number of them have even shown up on the radar of the national security state.

The ability to collect all phone metadata from all Americans has not deterred these attacks, nor has the massive surveillance of Muslim communities in the U.S., nor did the use of FBI informants to encourage often disturbed, trash-talking individuals towards jihadist crimes. In short, the government's strategy of preventing attacks by individuals we've now come to call "lone wolves" has failed, despite the curtailing of the First Amendment's guarantee of freedom of association, religion, and speech and the Fourth Amendment's guarantee of freedom from warrantless surveillance.

Time for a Change

As someone who has followed the development of the national security state carefully in the post-9/11 era and spent a fair amount of time talking publicly and privately with law enforcement agents and officials, I can see that many of them are aware of such problems and frustrated with the old approach. They know something's not working and that it's time for a change -- and a change is, in fact, coming. Whether it's the change that's needed is the question.

Aware of the legacy of the Bush years, the Obama White House, the Department of Homeland Security, and the FBI have spent much time and effort rethinking previous policies and have designed what they are calling a "new" approach to security. It's meant to partner prevention -- the dominant strategy of the past -- with a new word that has come into favor: "intervention." The goal is to intervene with youth attracted to extremism before violence can occur. As with so many attempts at government redesign, the new policy already has its own name and acronym. It's labeled "Countering Violent Extremism," or CVE. It's meant to marry the post-9/11 law enforcement and intelligence-driven profiling of potential terrorists with an approach borrowed from non-law-enforcement programs like those designed to help individuals deal with and break the pattern of drug or alcohol abuse.

Related Topic(s): Domestic Surveillance-Wiretapping; Domestic Terrorism; War On Terror, Add Tags
Add to My Group(s)
Go To Commenting
The views expressed herein are the sole responsibility of the author and do not necessarily reflect those of this website or its editors.