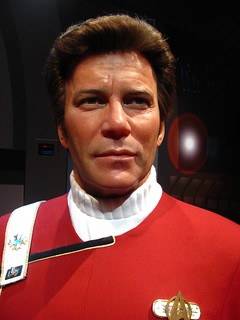 We were both experiencing the Sixties, Captain Kirk and I. Admittedly, I was still in the 1960s and the captain was somewhere in the 2260s. I was on an insignificant planet circling an unimpressive sun in an obscure solar system, while, for three years before the USS Enterprise was grounded and his travels put into syndication, the captain was moving at light speed through the "United Federation of Planets." In those years that we shared across the millennia, I was swept away by a movement protesting American military interventions in several countries -- Vietnam, Laos, and Cambodia -- so far away and culturally alien that, before we went to war there, few Americans could have told you where they were or even, perhaps, that they were. The captain, on the other hand, was repeatedly landing in peace on a series of strange planets peppered with what looked distinctly like papier-m che rock formations and filled with curious creatures he was sworn by a "prime directive" never to harm or change. In the parallel years, on my planet, American Captain Kirks were piloting their aircraft carriers off the Vietnamese coast and launching planes that, according to an American prime directive then operative, would slaughter uncounted "aliens" and, in the end, with the help of the U.S. Air Force and up to three million troops, destroy whole worlds.

Stranger yet, in those years (1966-1969) I watched both of these events on television. And while the Starship Enterprise and its Trekkie successors have come back so many times on TV screens and in multiplexes nationwide to deal with Khan, save the whales, tangle with Q, and explore ever stranger worlds filled with even more alien beings, on Earth, my country has stuck tenaciously with its particular version of the prime directive -- in Afghanistan, Iraq, Yemen, Libya, and elsewhere. There, as it blindly and repeatedly went where Americans had often gone before, killing by plane, drone, missile, and a bevy of other weapons, it continued to wreak havoc of every sort and gained nothing in return.

Intervention, it turned out, looked so much prettier in outer space. TomDispatch regular John Feffer, however, suggests that whether in bloody reality or in relatively peaceful fantasy, the essential problem in the 1960s, 2015, or the twenty-third century has been the very urge to intervene and that, if we don't somehow ditch it, it may turn out that our own prime directive will destroy us and the very framework for life on this planet. Tom

They were the "best and the brightest" but on a spaceship, not planet Earth, and they exemplified the liberal optimism of their era. The original Star Trek, whose three-year TV run began in 1966, featured a talented, multiethnic crew. The indomitable Captain Kirk had the can-do sex appeal of a Kennedy; his chief advisor, the half-human, half-Vulcan Mr. Spock, offered the cool rationality of that "IBM machine with legs," then-Secretary of Defense Robert McNamara. And the USS Enterprise, on a mission "to boldly go where no man has gone before," pursued a seemingly benign anthropological interest in seeking out, engaging with, and trying to understand the native populations of a fascinating variety of distant worlds.

The "prime directive," designed to govern the conduct of Kirk and his crew on their episodic journey, required non-interference in the workings of alien civilizations. This approach mirrored the evolving anti-war sympathies of series creator Gene Roddenberry and many of the show's scriptwriters. The Vietnam War, which raged through the years of its initial run, was then demonstrating to more and more Americans the folly of trying to re-engineer a society distant both geographically and culturally. The best and the brightest, on Earth as on the Enterprise, began to have second thoughts in the mid-1960s about such hubris.

Even as they deliberately linked violent terrestrial interventions with celestial ones, however, the makers of Star Trek never questioned the most basic premise of a series that would delight fans for decades, spawning endless TV and movie sequels. Might it not have been better for the universe as a whole if the Enterprise had never left Earth in the first place and if Earth hadn't meddled in matters beyond its own solar system?

As our country contemplates future military interventions, as well as ambitious efforts to someday colonize other planets, Americans would be smart to address this fundamental question. Might our inexhaustible capacity for interfering in far-flung places be a sign not of a dynamic civilization, but of a fatal flaw -- for the country, the international community, and the species as a whole?

The United States has never had much use for a precautionary prime directive. It has interfered with "alien" societies at a remarkable clip ever since the late nineteenth century. Indeed, such interference is inscribed in the genetic code of the country, for America is the product of the massive disruption and eradication of an already existing native population. Columbus also boldly went where no (European) man had gone before, and we recapitulate his voyage every time we send the Marines to a foreign shore or our drones into foreign air space. Native Americans didn't need "discovering" or new infectious diseases any more than Iraqis needed lectures about democracy from neoconservatives.

Despite considerable evidence of just how malign our recent interventions have proven to be -- in Afghanistan, Iraq, Libya, and elsewhere -- the U.S. government continues to contemplate military missions. Iran is, for the moment, off the hook, and so is Cuba. Washington has also repeatedly emphasized that North Korea is not in the crosshairs, though our aggressive military posture in East Asia might suggest otherwise, particularly to the paranoid leadership in Pyongyang.

But even the diplomacy-friendly Obama administration is still wedded to the use of drones in Pakistan, Afghanistan, Iraq, Somalia, and Yemen, not to mention a new secret program in Syria. It has dispatched Special Forces to 150 countries. And it has conducted, along with its coalition allies, more than 5,000 airstrikes against the Islamic State. U.S. troops remain in significant numbers in Afghanistan (9,800) and Iraq (3,500). Hundreds of U.S. military bases, with around 150,000 service personnel deployed on them, gird the globe.

These military actions have remapped the world -- and not in a good way. America's post-9/11 invasions, attacks, and occupations have created a crescent of crisis that stretches from Afghanistan across the Middle East and into Africa. Fragile states, like Somalia and Yemen, have been thrown into desperate chaos. Syria and Iraq have become incubators for the most virulent strains of extremism. And authoritarian leaders in Egypt and the Gulf States are using this turmoil to justify their own iron-fist policies.

Even the recent refugee crisis, the most significant since the end of World War II, can be traced back to the Bush administration's military responses to September 11th. For many years, Afghanistan was the leading exporter of refugees to the world, with Iraq a close second. Today, the leading source of refugees is Syria. Although the United States hasn't invaded that country, it has meddled there nonetheless, initially to depose Bashar al-Assad and then to "degrade" the Islamic State and its affiliates. In the twenty-first century, America's efforts to reengineer societies across the planet are ending up just as badly as its twentieth-century fiasco in Southeast Asia.

Meanwhile, the impulse to "boldly go" is no longer restricted to neo-colonial interventionism or military adventurism. There is now growing enthusiasm for sending an expeditionary force beyond Earth. Several competing initiatives aim to begin the colonization of Mars, in part to provide humanity with an alternative should global warming make planet Earth inhospitable to human life. These extraterrestrial efforts reflect a growing anxiety that the end is nigh, at least for the home team.

Related Topic(s): American Foreign Policy; Intervention; Star Trek, Add Tags
Add to My Group(s)
Go To Commenting
The views expressed herein are the sole responsibility of the author and do not necessarily reflect those of this website or its editors.