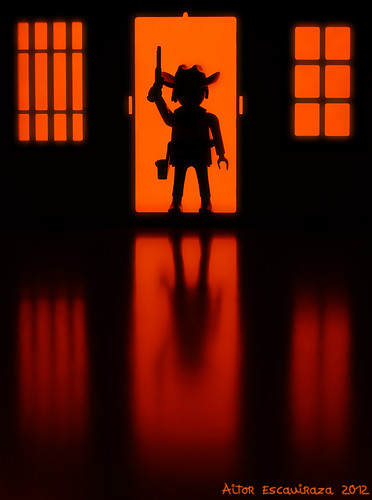 Pardon Me!
High Crimes and Demeanors in the Age of Trump
By Tom Engelhardt

Let me try to get this straight: from the moment the Soviet Union imploded in 1991 until recently just about every politician and mainstream pundit in America assured us that we were the planet's indispensable nation, the only truly exceptional one on this small orb of ours.

We were the sole superpower, Earth's hyperpower, its designated global sheriff, the architect of our planetary future. After five centuries of great power rivalries, in the wake of a two-superpower world that, amid the threat of nuclear annihilation, seemed to last forever and a day (even if it didn't quite make it 50 years), the United States was the ultimate survivor, the victor of victors, the last of the last. It stood triumphantly at the end of history. In a lottery that had lasted since Europe's wooden ships first broke out of a periphery of Eurasia and began to colonize much of the planet, the United States was the chosen one, the country that would leave every imperial world-maker from the Romans to the British in its shadow.

Who could doubt that this was now our world in a coming American century beyond compare?

And then, of course, came the attacks of 9/11. A mere $400,000 and 19 suicidal hijackers (mostly Saudis) armed with box cutters and organized from Afghanistan, a country plunged into an Islamic version of the Middle Ages, had challenged the greatest power of all time. In the process, they would bring down iconic structures in what would soon be known to Americans as "the homeland," while killing almost 3,000 innocent civilians, acts so shocking that they really did change the world.

Yet even then, a fervor for world-organizing triumphalism only took firmer hold in Washington. The top officials of President George W. Bush's administration almost instantly saw the 9/11 attacks as their very own "Pearl Harbor," the twenty-first-century equivalent of the moment that had launched the U.S. on the path to post-World War II superpowerdom. As Secretary of Defense Donald Rumsfeld instantly told his aides in the rubble of the Pentagon, "Go massive. Sweep it all up. Things related and not." And indeed they would do just that, seizing the moment with alacrity and promptly launching the "Global War on Terror" -- aka, among the cognoscenti, World War IV (the third, in their minds, having been the Cold War).

No simple "police action" against the modest al-Qaeda organization and Osama bin Laden would do (and those who suggested something so pathetically humble were to be laughed out of the room). At that moment, their newly launched "war" was to be aimed at no less than 60 countries. The world was to be swept clean of "terror" and the tool for doing so and for imposing Washington's version of a world order on much of the planet would be the U.S. military, a force like none ever seen before. It was, President Bush would claim, "the greatest force for human liberation the world has ever known." It was, as both he and Barack Obama affirmed, as became gospel on both sides of the aisle in Washington (until Donald Trump arrived in the presidential race of 2016), "the finest fighting force" in history. It was so unquestionably powerful that no enemy could conceivably stand in its path. It would "liberate" not just Afghanistan, but Iraq, a country in the Middle Eastern oil heartlands that had nothing to do with either al-Qaeda or Islamic terror but had a ruler despised in Washington.

And that, mind you, would only be the beginning. Syria and Iran would undoubtedly follow and soon enough the Greater Middle East would be brought under the aegis of a Pax Americana. Meanwhile, globally, no country or even bloc of countries would be capable of rising to challenge the United States into the imaginable future. As Bush put it in a speech at West Point in 2002, "America has, and intends to keep, military strengths beyond challenge, thereby making the destabilizing arms races of other eras pointless, and limiting rivalries to trade and other pursuits of peace." In that year, the U.S. National Security Strategy similarly called for the country to "build and maintain" its military power "beyond challenge."

What a soaring dream it all was! In response to the destruction of part of the Pentagon and those towers in New York City, a small group of top officials in Washington, long waiting for just such an opportunity, were determined to impose their version of order and democracy, military-first, on significant parts of the planet and no one would be capable of resisting. Not for long anyway.

Almost 16 years later, you know how that dream of domination turned out, but to Washington's power players at the time it all seemed so obvious. Except for a few retrograde Muslim rebels, it was clearly no one else's planet but ours to organize as we wished. The Soviet Union was already an instant historical memory, its empire scattered to the winds, and Russia itself largely immiserated. The Chinese had a capitalist economy of no small means (even if run by a Communist Party), but as a military force, as a great power, they were anything but impressive. And if you looked at the rest of the world, there were no other potential great powers, no less superpowers, on any imaginable horizon.

Given the history of the Global War on Terror and of the stunning inability of the U.S. military to impose Washington's will, no less its planetary dreams, on more or less anyone, it took an awful long time for such thinking to begin to die. And before it did, the political class, in a fervor of defensive exaggeration, began insisting in a mantra-like way on the "indispensability" and "exceptionality" of... well, us. It was as if the sense of decline most Americans had started feeling in their bones wasn't happening. Of course, the constant invocation of the country's singular specialness should itself have signaled just how wrong things were, because when you're truly indispensable and exceptional you don't need to repeatedly say so (or even say it at all).

It took a reality TV star with a curious comb-over who had run a set of casinos into the ground to pick up a Reagan-era slogan, "Make America Great Again," and bodysurf it into the White House. He did so in part on the widespread sense in the American heartland that, a quarter-century after the Soviet Union imploded, the U.S. was indeed in decline, even heading for the exit at a creep, not a gallop. The "again" in that slogan was the telltale signal that the billionaire "businessman" (and classic American huckster) had an intuitive handle on an American world of failed war-making and raging inequality about which both his Republican opposition and his Democratic opponent in election 2016, all still priming the pump of indispensability and exceptionality, seemed clueless.

Now, here we are on the planet the U.S. was to dominate and run for an eternity with an embattled president surrounded by generals whose skills were honed in America's losing wars of the twenty-first century. If you want a personal gauge of American decline, consider this: barely half a year into office, Donald J. Trump is already threatening to launch a nuclear war and exploring whether he has the power not just to pardon aides, friends, and family, but himself in case of future convictions. With the previous decade and a half in mind, here's a question for you: Pardon me, but even if he pardons himself, who's going to pardon the rest of us?

Related Topic(s): Soviet Union, Add Tags
Add to My Group(s)
Go To Commenting
The views expressed herein are the sole responsibility of the author and do not necessarily reflect those of this website or its editors.