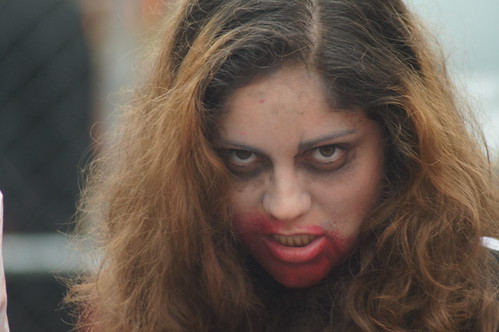 Don't look away. I mean it! Keep on staring just like you've been doing, just like we've all been doing since he rode down that escalator into the presidential race in June 2015 and, while you have your eyes on him, I'll tell you exactly why you shouldn't stop.

To begin with, it's time to think of Donald J. Trump in a different light. After all, isn't he really our own UnFounding Father? While the Founding Fathers were responsible for two crucial documents, the Declaration of Independence (1,458 words) and the Constitution (4,543 words), our twenty-first century UnFounding Father only writes passages of 140 characters or less. (Sad!) Other people have authored "his" books. ("I put lipstick on a pig," said one of his ghostwriters.) He reportedly doesn't often read books himself (though according to ex-wife Ivana, he once had a volume of Hitler's speeches by his bedside). He's never seen a magazine cover he didn't want to be on (or at least that he didn't want to claim, however spuriously, he had decided not to be on). He recently indicated that he thought the Constitution had at least one extra article, "Article XII," which he promised to "protect," even though it didn't exist. (My best guess: he believed it said, "The powers not delegated to the United States by the Constitution, nor prohibited by it to the States, are reserved neither to the States respectively, nor to the people, but to Trump and his heirs and there will be no inheritance tax on them.")

None of this should be surprising since, for him, the Constitution is undoubtedly a hearsay document, as is much of the rest of life. Still, at 71, who could doubt that he himself has the constitution of an ox, thanks perhaps to those Big Macs he reportedly adores, the Trump Steaks he tried to peddle, and the taco bowls ("I love Hispanics!") that he once swore he gobbles down. As someone capable of changing his mind on almost anything (other than himself), his attention span tends to be short. So briefing him on the state of the world, if you happen to be in the U.S. Intelligence Community, is evidently a challenging task. You reportedly want to keep it, well, brief -- no more than a page per topic, three topics per visit, lots of visuals. And don't forget to skip the "nuance," as well as any dissenting or conflicting views (especially on him, since that's the rare subject he truly cares about).

His daily briefings reportedly have only a quarter of the information President Obama's had, perhaps because the world's gotten simpler since those godforsaken days. Thank you, Rocket Man! And to give him credit where it's due, he's done a remarkably thorough job of turning the Oval Office into a business venture for himself and his kids. (Hey, if you happen to be a foreign diplomat, lobbyist, industry group of any sort, cabinet member, or White House adviser who wants anything from the Oval Office, let me recommend the new Trump International Hotel just down the block on Pennsylvania Avenue for a meal or an event! There's no better way to curry favor, even if you happen to be an Indian businessman and there's no curry on the menu. Don't miss those $24 chocolate cigars!) For the rest of us, we've gained immeasurably from his business ventures since his election. Otherwise, how would we know what the once-obscure word "emoluments" actually meant.

Keep in mind, though, that none of this makes him any less historic. As a start, it's indisputable that no one has ever gotten the day-after-day media coverage he has. Not another president, general, politician, movie star, not even O.J. after the car chase. He's Da Man!

Since that escalator ride, he's been in the news (and in all our faces) in a way once unimaginable. Cable news talking heads and talk-show hosts can't stop gabbling about him. It's the sort of 24/7 attention that normally accompanies terrorist attacks in the United States or Europe, presidential assassinations, or major hurricanes. But with him, we're talking about more or less every hour of every day for almost two-and-a-half years without a break. It's been no different on newspaper front pages. No one's ever stormed the headlines more regularly. And I haven't even mentioned the social media universe. There, he has, if anything, an even more obsessional audience of tens of millions for his daily tweets, which instantly become The News and then, of course, the fodder for those yakking cableheads and talk-show hosts. Think of him not so much as a him at all but as a perpetual motion machine of breaking headlines.

Part of that's certainly attributable to the fact that no presidential candidate or president has ever had his knack for attracting the cameras and gluing eyeballs. Give him credit for a media version of horse sense that's remarkable. It's a talent of a special sort fit for a special moment. What catnip is for cats, he is for TV cameras. He was the Kardashian candidate and now he's the Kardashian president.

But that's the lesser part of the tale. To grasp why we can't help staring at him, why we essentially have no choice but to do so, you need to understand something else: this sort of attention hasn't been a fluke. It doesn't represent a Trumpian black hole in time or an anomaly in our history, and neither does he. Of course, he's Donald J. Trump in all his... well, not glory, but [you fill in the word here]. However, he's also a symptom. He didn't create this particular media moment or this American world of ours either. He just grasped how it worked at some intuitive level and rode it (or perhaps it rode him) all the way to the White House.

He's gotten so much attention in part because he rose in (or, in his case, descended into) a changed media landscape that most of us hadn't even begun to grasp. He didn't, however, create that landscape either. If anything, it created him. What he did was make himself the essence of it. He was what a news media in crisis needed, as staffs were being decimated and finances challenged by the online world, and reporters were disappearing. He came on the scene, politically speaking, just when a once-upon-a-time sense of the "news" was morphing into so many focus groups on what would glue eyeballs, while coverage was increasingly being recalibrated for a series of designated 24/7 events, each generally filled with horror, fear, and plenty of weeping people. Think: terror attacks, mass killings, and anything involving "extreme weather" with all its photogenic damage.

By the time The Donald set foot on that escalator, our world of news was already devolving into a set of 24/7 zombie apocalypse events. Otherwise, he and his rants, his red face and strange orange comb-over wouldn't have made much sense at all. He would have been an unimaginable candidate before the media went into crisis, experienced what might be thought of as its own news inequality gap, and began refocusing on a few singular events of particularly resonant horror. These, in turn, regularly wiped away most of the rest of what was actually happening on this planet, while giving media units with smaller staffs and fewer resources the opportunity to put all their attention and energy into a set of eye-gluing, funds- and staff-preserving spectacles. As CBS Chairman Les Moonves put it bluntly during the 2016 presidential campaign, speaking of the focus on Trump's candidacy and antics, "It may not be good for America, but it's damn good for CBS... I've never seen anything like this, and this is going to be a very good year for us. Sorry. It's a terrible thing to say. But, bring it on, Donald. Keep going."

In the end, it wasn't Trump who brought it on; it was the media. And all of this took place in the midst of the rise of a social media scene in which "fake news" was becoming the order of the day and millions of eyeballs could be reached directly by any conspiracy nut or, for that matter, presidential candidate with the moxie to do it.

Related Topic(s): Media; President Trump, Add Tags
Add to My Group(s)
Go To Commenting
The views expressed herein are the sole responsibility of the author and do not necessarily reflect those of this website or its editors.