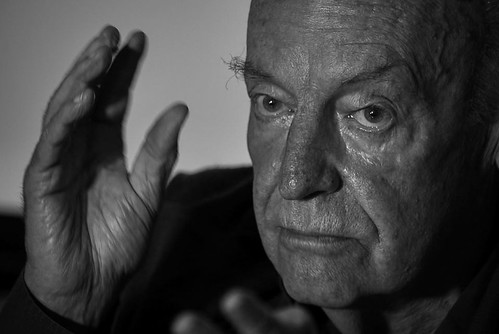 I'm 73, which means that saying goodbye for the last time is increasingly a part of my life. Today, with the deepest regret, I'm bidding a final farewell at TomDispatch to one of the more remarkable writers I've known, Eduardo Galeano. I initially got involved with him in the early 1980s. I was a young editor at Pantheon Books and, on some strange impulse, decided to publish Genesis, the first volume of his Memory of Fire trilogy, based on no more than a few sample passages translated by the remarkable Cedric Belfrage. Call it intuition when it came to a book that had already been rejected by a number of U.S. publishers. (Admittedly, at the time I proudly thought of myself as the "editor of last resort" in New York publishing.) That modest decision launched me on the print journey of a lifetime.

This was back in the days many of you won't remember when a book was translated and edited, often over long distances, without benefit of the Internet or email. Belfrage had been exiled to Mexico during the McCarthy years, so he and I worked together in the old-fashioned way: by mail. (I wouldn't meet him until years later: a little grey-haired gent with a cane who -- I was still young enough to be staggered by the thought -- had covered Hollywood for the British press in the silent film era.) It took forever to produce Genesis, though the process had a certain beauty to it. That first volume came out to modest attention and reviews, but its life and influence and that of the whole Memory of Fire trilogy would continue to grow in a way that only books could in those years and perhaps even in these. Eduardo was the most dramatic and beautiful of writers and he caught history -- the history of these continents and of so many of the half-forgotten figures who struggled for what truly mattered -- in a unique fashion, often in little passages of hardly a page or more. (I can still remember reading some of the more wonderful of them to my children as they were growing up.) I once wrote of him, "You somehow take our embattled world and tell its many stories in ways no one else can." How true.

It took me years to meet Eduardo, since I travel nowhere, though he voyaged endlessly. (A friend of his once told him, "If it's true what they say about the road being made by walking, you must be the commissioner of public works.") Never have I met a man of more charisma who seemed less aware of it. Being with him was an experience because people regularly approached him to tell stories about their lives that were... well, there's only one word for it: Galeano-esque. I saw it happen.

I've featured his work many times at this site, always with the deepest pleasure. This, I suspect, is the last time for both of us. The passages below are from his final, touching volume published by Nation Books, Hunter of Stories. And so, let me take this opportunity, one last time, to say goodbye, Eduardo, and thank you for everything, especially for the worlds you captured forever in words. Tom

[The following passages are excerpted from Hunter of Stories, the last book by Eduardo Galeano, who died in 2015. Thanks for its use go to his literary agent, Susan Bergholz, and Nation Books, which is publishing it next week.]

By day, the sun guides them. By night, the stars.

Paying no fare, they travel without passports and without forms for customs or immigration.

Birds are the only free beings in this world inhabited by prisoners. They fly from pole to pole, powered by food alone, on the route they choose and at the hour they wish, without ever asking permission of officials who believe they own the heavens.

The world is on the move.

On board are more shipwrecked souls than successful seafarers.

Thousands of desperate people die en route, before they can complete the crossing to the promised land, where even the poor are rich and everyone lives in Hollywood.

Related Topic(s): Galeano; Immigration; Memory; Monsters, Add Tags
Add to My Group(s)
Go To Commenting
The views expressed herein are the sole responsibility of the author and do not necessarily reflect those of this website or its editors.