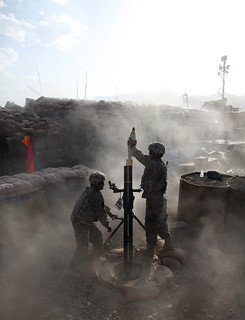 The never-ending war in Afghanistan
(Image by DVIDSHUB)   Details   DMCA

In an effort to attack Taliban fighters, an air strike by a U.S. plane killed dozens of civilians in Kunduz, Afghanistan. In the wake of the attack, an American general responded in unequivocal fashion. "I take this possible loss of life or injury to innocent Afghans very seriously," he said. "I have ordered a complete investigation into the reasons and results of this attack, which I will share with the Afghan people."

In an effort to attack Taliban fighters, an air strike by a U.S. plane killed dozens of civilians in Kunduz, Afghanistan. In the wake of the attack, an American general responded in unequivocal fashion. "I want to offer my deepest condolences to those innocent civilians who were harmed and killed on Saturday," he said. "I've ordered a thorough investigation into this tragic incident... we will share the results of the investigation once it is complete."

The first of those air strikes took place in 2009 and targeted fuel tankers hijacked by the Taliban. The second took place last month and targeted a hospital that Afghan officials say was used as a safe haven by the Taliban. The striking similarities between the two attacks are rooted not in uncanny coincidence but in the law of averages. Bomb a country long enough and such echoes are bound to occur.

Of course, U.S. planes have been carrying out attacks and terrorizing innocent Afghans in and around Kunduz (and elsewhere in the country) since 2001. This is, after all, America's war in Afghanistan, which has produced eerily repetitive tragedies; a war that's also seen almost endless announcements of achievements, improvements, and progress; a war that seems to regularly circle back on itself.

"The Taliban is gone," Army General Tommy Franks, the chief of U.S. Central Command, announced in 2002. "Afghanistan is rising from the oppression of the Taliban into an independent, democratic nation." Six years later, the Taliban was, oddly enough, still around. But things were still going well. "We're clearly not done" But I do know that we're making good progress, and each and every day we're making a difference in the Afghan people's lives," said Army Major General Jeffrey Schloesser. In 2010, Army General David Petraeus offered his unique assessment of the war. "We're making progress, and progress is winning, if you will," he insisted. This summer, another five years having passed, Army General John Campbell weighed in: "We have done a great job, both from both a conventional perspective and our special operating forces, and from the Afghan security forces" I see [the Afghans] continue to progress and continue to be very resilient."

There have been so many claims of "progress" these last 14 years (and so many air strike apologies as well) and yet each announcement of further success seems to signal the very opposite. Days after Campbell spoke, for instance, Brigadier General Wilson Shoffner, the U.S. deputy chief of staff for communications in Afghanistan, told reporters, "Kunduz is -- is not now, and has not been in danger of being overrun by the Taliban" that's sort of how we see it." Just over a month later, Kunduz fell to the Taliban.

This is the war that TomDispatch regular Ann Jones has monitored, analyzed, and covered since its opening stages, first as a humanitarian worker and then as a reporter. While the military was spinning tales of progress, Jones had a far more realistic assessment. "The story of success in Afghanistan was always more fairy tale than fact -- one scam used to sell another," she wrote at this site in 2006, drawing attention to "a threefold failure: no peace, no democracy, and no reconstruction." After embedding with U.S. troops in 2010 she said all the things America's generals never did. "I'd been 'on the front' of this war for less than two weeks, and I already needed a vacation," she wrote. "Being outside the wire had filled me with sorrow as I watched earnest, heavily armed and armored boys try to win over white-bearded Afghans -- men of extraordinary dignity -- who have seen all this before and know the outcome."

All this is to say Jones has been remarkably, consistently, undeniably ahead of the curve on the conflict, a reality reflected in her revelatory look at the deeply personal costs of America's second Afghan War in her now-classic book, They Were Soldiers: How the Wounded Return from America's Wars -- The Untold Story. She's done what billions of U.S. taxpayer dollars, 17 U.S. intelligence agencies, the finest officers produced by America's premier military academies, and untold numbers of analysts with access to highly classified information, have failed to do: accurately assess the situation in a country the U.S. has been intimately enmeshed in, on and off now, for the better part of four decades. With that in mind, let Jones give you the lowdown on the current state of "progress" there. When you're through, chances are -- even if you lack a top-secret clearance and have never set foot in the Greater Middle East -- you'll have a better grasp of the reality of the war than either the Pentagon or the president has ever had. Nick Turse

Ten months ago, on December 28, 2014, a ceremony in Kabul officially marked the conclusion of America's very long war in Afghanistan. President Obama called that day "a milestone for our country." After more than 13 years, he said, "our combat mission in Afghanistan is ending, and the longest war in American history is coming to a responsible conclusion."

That was then. This is now. In between, on September 28, 2015, came another milestone: the Taliban takeover of Kunduz, the capital of the province of the same name in northern Afghanistan, and with a population of about 270,000, the country's fifth-largest city.

A few invaders strolled unopposed to the city center to raise the white flag of the Taliban. Others went door to door, searching for Afghan women who worked for women's organizations or the government. They looted homes, offices, and schools, stealing cars and smashing computers. They destroyed three radio stations run by women. They attacked the offices of the American-led organization Women for Afghan Women and burned its women's shelter to the ground. They denied reports on Kabul TV stations that they had raped women in the university dormitory and the women's prison, then threatened to kill the reporters who broadcast the stories.

They called the mobile phones of targeted women who had escaped the city and warned them they would be killed if they returned. No longer safe in Kunduz, those women found that they were not safe in the places to which they had fled either. London's Telegraph reported that "the lasting legacy of [the Taliban's] invasion may ultimately prove to be the dismantlement of the city's women's rights network."

The next day I got an email from a woman newly assigned to the American Embassy in Afghanistan. Security rules keep her confined behind the walls of the embassy grounds, she said. Still, knowing that Afghan women are not "secure," she is determined to help them. Her plan, admittedly still in the brainstorming stage, calls for "programs that will teach women how to defend themselves in some form or another," because "the best way for women to be safe is for them to know how to keep themselves safe."

I think of all my brave Afghan colleagues who go to work in women's organizations, like those in Kunduz, every day under threat of death. I think of fearless Afghan women across the country -- activists, parliamentarians, doctors, teachers, organizers, policewomen, actresses, TV presenters, singers, radio broadcasters, journalists, government ministers, provincial officials, candidates for public office -- who over the last 10 years have been assassinated one by one, by teams of armed men on motorcycles, or by a bomb attached to the underside of a car, or by masked squads with ropes or Kalashnikovs. These killings have gone on year after year, the names of the dead women remembered and their numbers tallied by Human Rights Watch, while the Afghan government and the Bush or Obama administrations uttered scarcely a word of protest or condolence, and Afghan police failed to arrest a single assassin. George W. Bush famously claimed to have "liberated" Afghan women. Fourteen years later, with the Taliban again rising, with Washington having sunk tens of billions of dollars into the training and arming of hundreds of thousands of Afghan men to defend their country, it's now time to offer Afghan women a course in how to defend themselves?

Related Topic(s): Afghanistan War; Afghanistan War; Military; Obama; Taliban, Add Tags
Add to My Group(s)
Go To Commenting
The views expressed herein are the sole responsibility of the author and do not necessarily reflect those of this website or its editors.