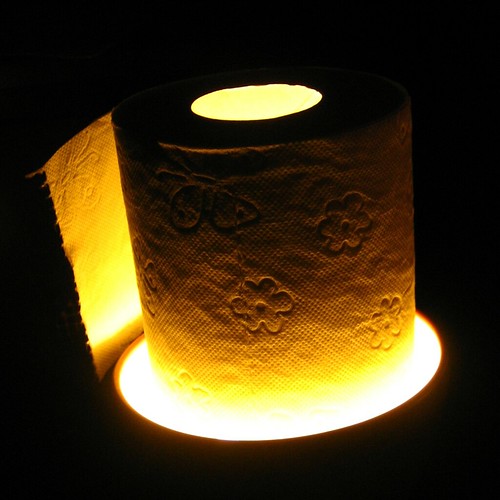 The coronavirus panic has resulted in hordes of people running after toilet paper. Such actions are the flip side of running with the bulls, except that I suspect those who run with the bulls have some sense of why they do it. I imagine the thrill is a bit different, even if the goal is similar.

The overriding narratives of every society are composed of myths and symbols. Societies operate within controlling mythic symbol systems whose primary purpose is to allow people to move through their lives on automatic pilot, believing they are safe from death and chaos in the arms of the authorities. All cultures revolve around death and the need to control people's fears of it through the construction of symbols of reassurance. People need to be convinced that they are protected. In "normal" times, all this goes relatively smoothly and the symbols of protection - such as the military, the primary institutions, and photos of the political leaders against a backdrop of flags - serve as a comforting security blanket. In times of extreme stress, however, whether real or created, the system of reassurance breaks down and people panic.

Enter the coronavirus and the run on toilet paper. Many economists and psychologists have commented on the fear that motivates this hoarding behavior. Most commentaries are true as far as they go. The problem is they don't go very far and never touch the real issue. Hoarding is obviously done to quell the fear of running out. But running out of what?

Why toilet paper? The explanations I have seen say that toilet paper is an essential household item that is easy to hoard because it has no expiration date and comes in large packages that are light and easy to carry and store. All true. Fear induces hoarding, and people have gone insane hoarding all kinds of items, as if the plague to end the world were upon us, which is what the mass media keeps repeating as it whips up lunatic reactions. The end times are near! The Grim Reaper is at your door!

The authorities have inflamed this fear, as authorities are apt to do, since fear, and the fear of death and disease, is the greatest way to control people. Remember the aftermath of the attacks of September 11, 2001. Fear went rampant and people ran to religious services for a while as elements within the U.S. government sent anthrax through the mail to heighten the fear. But anthrax was nothing compared to the coronavirus's spread and panic. With the 2001 attacks, the terrorist fear soon went onto the back burner to simmer away for all these years and keep everyone on an emergency fear footing so the government could execute its war and Patriot Act plans with little rebellion. It worked very well. Constant fear and anxiety became the norm as people internalized the 9/11 meme and its emergency phone number reminder.

But now the coronavirus panic is running wild and we don't know when it will end. But why this frantic race to scoop up toilet paper? The answer should be quite obvious, but it is isn't because it is unconscious. People react to the real biological fear of death by adopting any means that might protect them from it. Excrement is the fundamental symbol of death. It suggests we are bodies and nothing more; that the symbols of transcendence, whether religious or secular, are mirages. sh*t has always been so associated, and always will. It has also long been associated in the Western imagination with the devil, Satan, the Lord of the underworld, who rules the pit of smelly steaming death where the bodies of people are deposited down in the earth to rot away. That's it. No heaven, no immortality, just maggots in the dirt where sh*t descends. The thought that that is all we are doesn't go over well with many people.

To accept that we are only bodies, and that civilization and cultures have been constructed upon symbols created to tell us this isn't true are pipe dreams, is the fear that runs rampant in days such as these, with the coronavirus allegedly stalking everyone as if it were Mister Pumpkin Head ready to pounce. The fundamental human fear is that we, like excrement, are destined to be buried and forgotten; that we will be buried in the earth or flushed down a toilet. The fear is that "dead" excrement is what we are and that all the shiny symbols erected by civilization to say we are more are just bullshit.

This fear is compounded when science often claims that everything religions have ever taught is hocus pocus. The religious symbol systems that were the overarching bulwarks of western civilization have been replaced by science and technology. But these twins have no answer for the fact of death, except to say it is inevitable and maybe we can help you to live a bit longer. Many people, if only unconsciously, might not be satisfied with that answer.

So when death comes courting in the guise of a so-called plague or pandemic, toilet paper will keep you safe and clean. You can wipe away any reminder that you are mortal and will return to the earth; that you will rot there unless you somehow believe in the transcendent spirit of days gone by.

Rather than focus on all the death unleashed by government violence - their alleged protectors - people are easily manipulated into fearing the wrong things and unconsciously seeking some innocuous symbol that might do the job.

Running with the bulls gives people the thrill of teasing death while defeating it. It must be very exciting.

Running after toilet paper is quite dull by comparison, but it serves a similar purpose.

It's the people's vaccine against death.

Related Topic(s): Anxiety; Death; Panic; Religion; Secular; Symbol, Add Tags
Add to My Group(s)
Go To Commenting
The views expressed herein are the sole responsibility of the author and do not necessarily reflect those of this website or its editors.