Yesterday Trump unveiled his "Deal of the Century" proposal for a two state solution , a Palestinian State including the majority of the West Bank, Gaza, two separate areas-mostly uninhabited-in the Negev Desert of Israel along the border with Egypt.

Looking at Trump's "Vision of Peace" conceptual map it is necessary to dwell on some of the particulars: 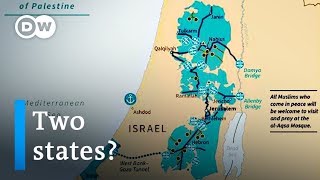 One sees a long strip of territory running the full length of the West Bank adjacent to the Jordan River that will become integrated within Israel proper.

Interspersed within the proposed Palestinian State are 15 Israeli settlements in the West Bank that will become permanent enclaves of Israel. Separate Israeli roads will link these settlements to Israel proper.

All Jerusalem will remain under Israeli control with territory outside of E. Jerusalem becoming part of the new Palestinian State.

Gaza will become part of the Palestinian State connected to the West Bank by a tunnel to be built.

Other roads and tunnels are proposed to be built linking the various Palestinian enclaves within the West Bank.

Retired. The author of "DECEIT AND EXCESS IN AMERICA, HOW THE MONEYED INTERESTS HAVE STOLEN AMERICA AND HOW WE CAN GET IT BACK", Authorhouse, 2009
Related Topic(s): Deal Of The Century; Israel; Israel 1948; Israel And Palestine; Israeli Settlements; Jerusalem; Palestinian State; Trump; Trump Peace Plan, Add Tags
Add to My Group(s)
Go To Commenting
The views expressed herein are the sole responsibility of the author and do not necessarily reflect those of this website or its editors.