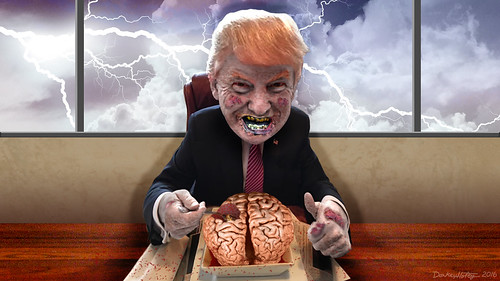 Win the war in Afghanistan? Impossible, you say?

Dear Mr. Trump: it can be done, I assure you.

There is a pattern. It's tried and true. It's been tested in America for decades. So let's rely on this accumulated wisdom and put it to good use. Finally.

Buckle up. This doesn't need an executive summary. It isn't a position paper. It's an all-out attack. Let's roll!

From hundreds of planes, drop fast food all over Afghanistan. Burgers. Fishsticks. McMuffins. Legs, breasts, wings--two weeks of chicken done right. It's a good intro. Lightens everybody up a little. Hey, they've been cooking vulture over yak excrement for centuries. They'll love the change. And the numerous chemicals in the food will begin to slow them down. That's a given.

Then, from those same planes -- candy! Fifty thousand tons of gumdrops, jelly beans, Almond Joy, Reese. Hell, Reese all by itself is unstoppable.

Sugar! You're telling me people can resist sugar? They'll be scooping that stuff up off the frozen ground. In high mountain areas, tribes live on lichen. All of a sudden, here come 20 colors of Reaganesque jelly beans out of the sky!

Give them enough sugar, and they'll be running in circles one minute and lying back and napping the next. It's chemical determinism.

A month of heavenly candy.

Then next, a million cases of various diet sodas dumped out of our planes. Aspartame! Weird those dudes out. Three months, and they won't be able to find their way back to their yurts. They'll be bumping into rocks and trees, howling at the moon.

"Hey, dude, it's time for the Friday night tribe meeting."

"Shh! First, two hours of Hermosa Beach Women's Finals. Then Victoria and Billy just adopted a baby. She can't have kids. Billy paid two million for a little girl. But it's actually Daisy's baby. Nobody knows it."

Related Topic(s): Afghanistan War; Chemical; Doctors; Food; Ipad; Prozac; Stuff; Sugar; Zoloft, Add Tags
Add to My Group(s)
Go To Commenting
The views expressed herein are the sole responsibility of the author and do not necessarily reflect those of this website or its editors.