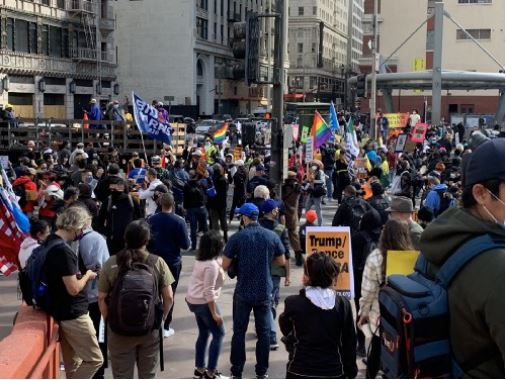 Joe Biden won the popular vote with a margin of over five million votes. With this victory, the Democrats have earned more votes in seven of the past eight presidential elections. The Shrub's reelection in 2004 was the lone exception.

With a winning percentage of 87.5%, it is clear that the Democrat's ideals are preferred by a majority of the electorate. Yet, the government under Trump moved to the far-right and now borders on authoritarianism. The 45th president ruled without accepting input from the Democratic majority in the House. When the legislative branch would not give in to his demands Trump flagrantly broke the law by illegally diverting "$2.5 billion from military construction projects to build sections of the U.S. border wall with Mexico" and extending unemployment benefits without authorization. The person who ran on the promise of understanding the "art of the deal" could not broker compromises to solve major problems facing the American people. 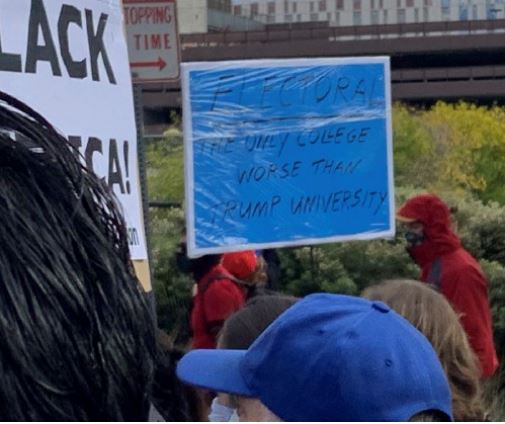 A sign spotted at the Los Angeles celebration
(Image by Carl J. Petersen)   Details   DMCA
As the victor in this election, Biden needs to lead according to the mandate he has been given. As Obama's Vice President, he saw what happens when a hand is reached out to the modern GOP. Compromises were made in drafting both the stimulus package and Obamacare only to have the opposing party continue to block them in their failed effort to make Obama a one-term president. The Republicans have made it clear that "compromise" is a dirty word; there is no reason to believe that they do not mean what they say.

And just whom would Biden compromise with? At this point, Senate Majority Leader, Mitch McConnell, has not even acknowledged the will of the American people and recognized the winner of the election. "Only a small handful of Republican senators have congratulated Mr. Biden on his victory." The rest are still cowering from the President of the United States of America as he sulks inside his White House bunker like a toddler who lost a game of Chutes and Ladders.

As Democrats fight to take control of the Senate, this is the perfect time to frame the battle. The talking heads representing the corporate wing of the party are pushing for the abandonment of left-leaning values in order to win the Georgia special elections, ignoring the fact that this usually reliable red-state did not go blue to maintain the status quo. Instead of running from the Green New Deal, reversing the Trump tax giveaways and universal healthcare, Democrats need to do a better job of explaining how these policies benefit Trump's working-class supporters:

Trump's maskless hoards have proven that they will not be persuaded by science, so arguing the facts about people being complicit in the warming of the planet is pointless. Instead, the left should aim for the pocketbook. Securing man's place on this planet will require massive change and change is by nature scary. Republicans have built their brand on the fear that transitioning away from fossil fuels will lead to economic collapse. We need to prove otherwise.

Nancy Pelosi and the House can take the first step by introducing legislation in the lame-duck session to fund clean energy projects in areas of the country that are economically dependent on oil and coal. This will not get past the Senate but will show the people of these areas that there is a blueprint to a future without fossil fuels. Given a choice between a job building a new future and one that will lead to black lung disease, which one do you think that these Trump voters will find more desirable?

Even more importantly, when it comes to marketing, the left needs to learn from the GOP. Solyndra was one failure in a sea of success stories during the Obama administration, but it is the one name that Americans are most likely to recognize. In a political climate where the loudest voice often wins, Obama should have done more to put a success story in front of the American people. 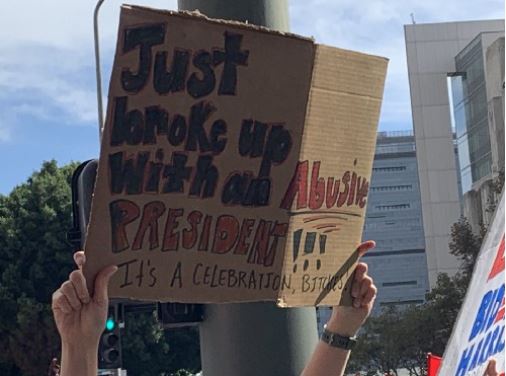 In the aftermath of the Trump tax cuts, "the 400 wealthiest people paid a lower tax rate than any other group." This year, the richest 1% of Americans will receive "a total of $78 billion in tax cuts". Due to Trump's tax law, "60 corporations, including Amazon and Netflix, paid $0 in federal income taxes" for the 2018 tax year. While the benefits of these tax changes were supposed to trickle down to the lower classes, "median family income grew by just $514 in the first year after the tax law took effect a fraction of the growth that families saw under President Barack Obama in each of his last three years in office." The end result has been a drastic increase in income inequality.

No matter how targeted, any move to increase taxes by the left will play into GOP fear-mongering that Democrats just want to increase taxes on the working class. Instead, Pelosi should immediately introduce legislation to eliminate some of the inequities in the tax system. This should include eliminating tax deductions for corporations so that they start paying for the services that the government provides to them. Limits on the amount paid in payroll taxes for Social Security should also be removed while also eliminating the tax that is paid on the first $26,200 in income. This represents the current poverty rate for a family of four. The government should also start collecting payroll taxes on capital gains to further boost the retirement system and reduce income inequality.

Georgia is one of the red states that did not take advantage of the Obamacare provision that allowed them to expand Medicaid coverage. It would, therefore, be directly advantageous to the Democrats running in the special election if Pelosi were to introduce legislation to implement Biden's promise to implement a cost-free Medicare option in any state without expanded Medicaid coverage.

All Americans should also be allowed the option of buying into Medicare coverage. This would not eliminate the problem of insurance companies extracting profit out of our healthcare system, but it would add a new layer of competition. The private health insurance industry will be forced to replicate a more consumer-focused Medicare system if they do not want to lose customers to the government program. 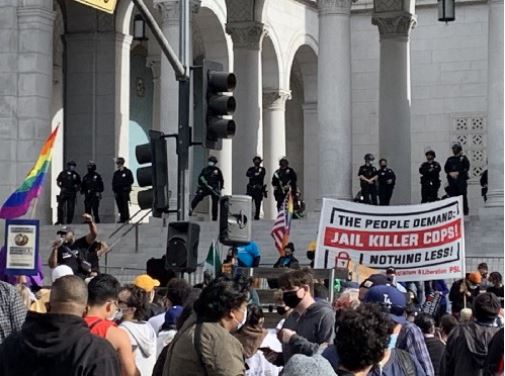 Related Topic(s): President Joe Biden, Add Tags
Add to My Group(s)
Go To Commenting
The views expressed herein are the sole responsibility of the author and do not necessarily reflect those of this website or its editors.