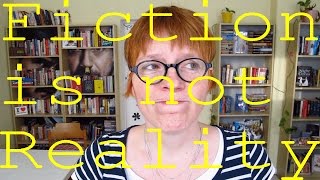 Fiction is not Reality
(Image by You Tube)   Details   DMCA

Part I -- Confusing Fiction and Reality

Most people have two criteria for what is real: their own experience and information about what is supposedly real from authority figures. For most people, their own experience is a pretty local affair, both in terms of geography and time. For just about everything beyond the local, the authority of "experts" -- leaders, newscasters and others supposedly in the know -- is often accepted as true. Somewhere in the mix you can use your own judgment, but it is usually narrowly based in culture and education. The result is a lot of room for confusing fact and fiction. Just consider presidents such as Ronald Reagan, who spoke of being present at the liberation of concentration camps when he had only seen the video recordings. Donald Trump said "he saw thousands cheering " as the World Trade Center crumbled in 2001. What he had apparently picked up on were false rumors of rooftop "celebrations by Muslims" (another variation of the rumor said those cheering were Israelis). And then there was George W. Bush, who just "knew" that the Iraqis had nuclear weapons. None of these frighteningly powerful men could tell the difference between their opinion, as well as their "gut feelings," and what is real. As it turns out, this is not restricted to presidents.

Confusing fact and fiction is more common than one would think. The history of storytelling bears this out. It might be that we are predisposed by evolution to believe that the stories we are told all have a core of truth -- maybe that is why gossip is so deadly. After all, for much of human history the spoken word was how information was passed along. The evidence that some of this had survival value is that we still have an almost instinctive willingness to believe what we are told. Today the confusion over what is real persists, but a primary source is not just our local ambiguous experience or the word of sanctioned authority. It is also the technological ability to display fiction in ways that appear all too real. In other words, TV and the movies.

If I told you that there are many modern people (just how many is unknown) who often cannot tell the difference between fictional television and cinematic depictions on the one hand, and reality on the other, would you scoff? If so, consider the short essay written in 2012 by Dr. Thalia R. Goldstein, a developmental psychologist at George Mason University. She tells us that actors who play roles as diverse as physicians, people with psychiatric problems, and forensic and police investigators are often confused by viewers with their stage characters. The actors receive thousands of letters asking for advice under the assumption that the character they portray is the real them. The same thing has been happening for more than a hundred years when it comes to mail being sent to the fictional, detective Sherlock Holmes. And while we are at it, let's throw in the Orson Wells 1938 radio broadcast of War of the Worlds -- which "caused panic among its listening audience" despite having been introduced as "a drama."

The confusion of fiction and fact can often be a bad thing. It can be used by people in authority to manipulate others and manufacture situations that lead to mass fear, discrimination, suspicion and other forms of public disarray. So it comes as a surprise to find out that there are some important situations where this confusion can lead us in positive directions.

There is now a fictional genre called climate fiction, or cli-fi. The fiction here comes to us from movies and TV programs depicting the world suffering from one sort of climatic disaster or another. Actually, such portrayals have been going on for a long time in a sporadic sort of way. Now, in the context of the debate over global warming, they seem to be having some positive effect on public opinion. According to Anthony Leiserowitz, director of the Yale Program on Climate Change Communication, storytelling is our "most powerful form of communication" and stories about climate change disasters "seem to help people believe in actual climate change." Leiserowitz demonstrated this through a national survey which sampled public opinion a week before the release of the movie The Day After Tomorrow, a 2005 film depicting the onset of a new ice age. The film generated a lot of public discussion about climate issues. Then he did a follow-up survey four weeks after the film came out. What he found was that "across the board, the movie appears to have had a strong influence on watchers' risk perceptions of global warming." Also, "those who saw it, compared with those who skipped [it], felt more inclined to make personal changes to reduce their carbon footprint. They were more inclined to talk to friends about climate change, and seeing the film affected voter preferences." However, the impact did recede with time.

There have been a number of such movies, ranging from Mad Max and its sequels to Wall-E and yet here we are stuck with President Donald Trump, whose gut tells him a cold snap in the midwest is enough to disprove the reality of long-term global warming. However, the question remains, can the effective and purposeful use of cli-fi manipulate people to help save the planet?

One can think of other areas where the same sort of TV and movie storytelling can help positively change opinions. Take, for instance, the present worldwide outbreaks of measles. That includes the United States, where hundreds of cases of the disease are being reported across the country. How can this be? Measles was officially declared eliminated in the U.S. in the year 2000.

It can be because since that time an "anti-vaccination" movement has grown up in the country. It is based on the erroneous belief that there is a connection between childhood vaccines and autism. Even though this connection has been demonstrated to be false, the number of Americans who now refuse to have their children vaccinated against the measles, and an array of other diseases, has steadily grown. It has grown particularly among those who distrust both government and science, a population centered, among other places, in the country's northwestern states. In other words, just as people find it hard to relate to climate change that will impact society sometime in the undefined future, so many feel the same way about now unfamiliar diseases. These too are perceived in a fuzzy fashion and people feel they can be ignored. And if the vaccines that have helped make such diseases unfamiliar are (albeit falsely) suggested to be connected to other, more concrete and frightening realities (like autism), people will avoid them -- and then, sooner or later, the old disease agents return.

Well, if a disproven rumor about vaccination and autism can cause thousands to act in a demonstrably self-destructive way, how about a story that reverses this process? In other words, someone should make a movie and/or a TV series about a disease plague that breaks out as a result of an incorrect rumor. It should be shown first and foremost in those areas where vaccination rates are waning.

This approach to the problems such as climate change and waning rates of vaccination might sound far-fetched. Many might have a principled objection to this level of popular manipulation. On the other hand, the stakes are pretty high, ranging from growing incidents of preventable diseases to trashing the planet.

Related Topic(s): Climate; Fiction; Ignorance; Righteous Arrogance; StoryTelling; Truth, Add Tags
Add to My Group(s)
Go To Commenting
The views expressed herein are the sole responsibility of the author and do not necessarily reflect those of this website or its editors.