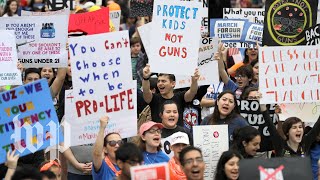 Notice the signs: where are the exact demands for Congress?

Eight hundred thousand people participated in the March for Our Lives rally in Washington on March 24th, say organizers with the #NeverAgain movement sparked by the Parkland, Florida school massacre. The turnout was impressive -- but will it lead to new gun legislation?

History suggests no. But victory is achievable -- if rallies are sharpened in focus.

Enthusiasm is necessary to launch a movement. Careful strategizing is required to sustain and grow it. The Million Moms March, also dedicated to curbing gun violence in 2000 drew a similar-sized crowd. Yet the next two decades saw one mass shooting after another, the NRA gaining rather than losing political influence, and a major reversal for the gun-control movement marked by the failure to renew the ban on assault weapons.

Whether it's the Million Man March to promote unity and family values among African-American men or the 1981 Solidarity Day march to defend unions from Reagan-era attacks against organizations like the air traffic controllers union, there is a century-old tradition of large groups of Americans gathering in Washington, carrying signs, chanting slogans and being ignored by Congress and the president after they go home. To those shattered dreams you can add 2011's Occupy Wall Street, another leaderless protest that came together and fizzled.

At almost all these events, speakers proclaimed themselves present at the continuation or initiation of a movement. But sustained movements must be organized. These were, like the Free Speech Movement at UC Berkeley in 1964, political spasms. Perhaps not theater as farce -- but theater at most. At best, some presaged something later, bigger and effective.

Weighing in favor of the #NeverAgain movement's chances of effecting real change is the role of social media, which can bring large groups of people together quickly. But they also need a simple, coherent, bumper-sticker-ready demand message.

Writing in USA Today, Rick Hampson argues that even the go-to granddaddy of all contemporary marches, where Martin Luther King, Jr. delivered his "I Have a Dream" speech, was less effective than advertised: "Even the 1963 civil rights march required so much effort, created so many internal divisions and produced so few immediate results (the 1964 Civil Rights Act was passed only after and because of President Kennedy's assassination) that its leaders vowed never to attempt another."

Hampson has a point. The 10 printed demands for the March on Washington remind us of American society's failure to address the needs of the poor and oppressed since 1963. They wanted a $2-per-hour minimum wage, which is at least $15 today. Even Democratic presidential candidate Hillary Clinton refused to go over $12 in 2016. Still, they had a clear, coherent set of demands, beginning with: "Comprehensive and effective Civil Rights legislation from the present Congress -- without compromise or filibuster -- to guarantee all Americans: Access to all public accommodations, decent housing, adequate and integrated education, the right to vote." And the Civil Rights Act did get passed.

The March 24th March for Our Lives opposed gun violence. The problem is, it failed to articulate a precise demand or set of demands.

"School safety is not a political issue," read the Mission Statement. "There cannot be two sides to doing everything in our power to ensure the lives and futures of children who are at risk of dying when they should be learning, playing, and growing. The mission and focus of March For Our Lives is to demand that a comprehensive and effective bill be immediately brought before Congress to address these gun issues."

Sorry, but those are weasel words.

Related Topic(s): March For Our Lives; NRA; People; Protest; Rallies; School, Add Tags
Add to My Group(s)
Go To Commenting
The views expressed herein are the sole responsibility of the author and do not necessarily reflect those of this website or its editors.