At a homecoming bonfire that included a Lady Gaga song in memorial to Jamey Rodemeyer, shouts were heard "You're better off dead. We're glad you're dead" while knowing full well that Jamey's sister was in attendance. Police are investigating. (see video below).

So Will Jamey Rodemeyer's Death Be Featured In Hell Houses? 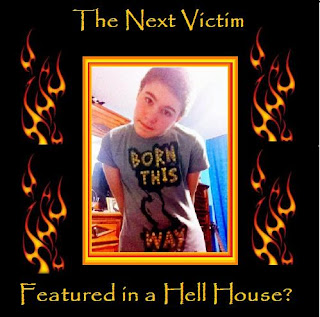 Jesus Christ died for your sins. That was unthinkably beautiful. Now Jamey Rodemeyer has died from your sins. That is not. That is the very hell that, awfully enough, you've somehow tricked yourself into believing your life refutes. - from the blog of John Shore

One of the most obvious causes of gay teen suicide are hell houses, yet people like Rev. Keenan Roberts refuse to acknowledge the fact or take any form of accountability.

"I don't care. They say that we're causing all the shame and confusion that the homosexual experiences--absolutely wrong. We're saying, 'You were not born this way; God did not do this to you. Jesus has all of the power to overcome and to set you free.' It's a conservative message presented in a very nonconservative way."

"I don't care." Actually, that just about sums up the attitude of most hell house churches. In the past ten years, producers of hell houses have been told by researchers and psychologists that hell houses are harmful. For example, a 2001 study published in the Journal of Psychology  found that "the belief in an active Satan directly related to intolerance toward gay men and lesbians." One year ago, in a series called Demonizing America, we hit on the aspect of teen suicides and hell houses. but since then, there has been no evidence that churches will attempt to edit/change their scripts.

From a hell house script:

Homosexuality - No one is born gay. Genesis C1 V27 says that God created man in His own image. Homosexuality is sin and is not just an alternative lifestyle.

Gay Wedding - The sacred institution of marriage between a man and a woman is further disgraced by the unholy union of a man and a man, and Satan wouldn't have it any other way

The chorus against hell houses may be growing, but it's not large enough yet to really make a difference. Too many churches just "don't care." And while Christian Right leaders like Tony Perkins, James Dobson, and Bryan Fischer scream "We're not to blame," the onus is still on the bullies and their parents.

THE INTENSITY OF THE BULLYING

What is particularly terrifying about Jamey Rodemeyer's case is that (see update), his tormentors as still trying to torment him and his family. I personally have only seen such continued viciousness in one case: while living in San Francisco's dangerous Bay View district, I experienced gang homicides followed by additional shootings - OUTSIDE THE FUNERAL PARLORS OF THE VICTIMS. Acts perpetrated like this show an absolute disrespect for humanity and human dignity. Had Rodemeyer's tormentors gone to his funeral and chanted the same taunts, it would not have been more horrible.

The intensity of Rodemeyer's continuing torment could spark a kind of warfare: if the bullies are brought to light, their families will be scorned and they might receive threats. The latest development has now caused America to react more with a horrified vengeance: the number of people in the country who would love to punch any of the perpetrators in the gut is growing. Ku Klux cross-burners - the ultimate bullies - could not have done a better job in fomenting hatred.

The Nail In The Coffin

Rev. Dan Vojir is has been writing/blogging on religion and politics for the better part of ten years. A former radio talk show host (Strictly Books " Talk America Radio Network) and book publisher, Dan has connected with some of the most (more...)
Related Topic(s): Bullying; Demonizing; Gay Bashing; Gay Lesbian Rights; Hell House; Homosexuality; Intolerance; Jamey Rodemeyer; Marriage; Revenge; (more...) Satan; Teen Suicides, Add Tags  (less...)
Add to My Group(s)
Go To Commenting
The views expressed herein are the sole responsibility of the author and do not necessarily reflect those of this website or its editors.