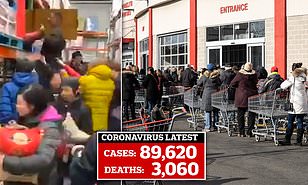 The most vulnerable population can be quarantined in the many empty hotels until the rest of us develop herd immunity. That's where the next round of stimulus should go, to save the hospitality sector while also saving lives. If NYC loses its ability to support tourists, it will have lost one of the top 5, or maybe top 3, industries.

In NYC, according to two recent studies that say only 10-20% infection rate is needed to achieve EFFECTIVE herd immunity, we are already there. The fear of a resurgence is misplaced even if the hospitalization & death rates will bubble along for years (people get older, get sick from other co-morbidity factors, or just get unlucky). The vast majority - many of which are undetected cases - will get the virus and get over it with few to no symptoms. They will never get over the loss of a business, bankruptcy, or even the creeping paranoia that comes from living in fear of interacting with anyone you don't know intimately. People in our building won't even get on the same elevator, even when both of us are masked.

Sweden has a well-documented CV death rate of 0.0558% out of 10.29m people and didn't lock down. They have flattened their curve, largely, while America's keeps going up, in part because of more testing in under-testing states. America has a CV death rate of 0.0472% out of roughly 328.24m people and is going through all sorts of hoops that are largely ineffective, but economically devastating. The big problem is our comorbidity factors that are such an outlier compared to the rest of the world, especially our obesity and overweight factors. Also, our healthcare system is corrupt (cheap, effective, or at least partially effective cures like hydroxychloroquine, especially when mixed with zinc and azithromycin, are withheld or even banned from sale, despite decades of safe proven usage, even for chronic long-term conditions like Lupus, Rheumatoid arthritis, and even Malaria), expensive (meaning the most vulnerable people can't afford to go to the hospital), and often counter-productive (for a few months, people were being hastened to their deaths by being put on ventilators, which just increased lung damage). Staying at home, however, is just making people fatter and flabbier. NYC may be an exception if all the joggers and bikers I am seeing on my twice weekly (unmasked) bike rides are any indication. But in general, it is not helping people.

However, America may not even be doing that badly compared to the rest of the world and even with more testing than most of the world, it has likely detected only 10-20% of the actual number of cases, meaning the death and hospitalization rates are vastly exaggerated, as is the response to this false statistic. The fact is, many, if not most parts of the world don't fully test their populations. This includes all of Africa, with the possible exception of South Africa, where the infection rate is fifth in the world. Iran probably has 3X the number of CV deaths being reported. And so on:

But even adjusting for the higher death rates, the lock-down is a vast over-reaction. There are 161,000 global deaths in an average day in a year. There would normally be about 60 million deaths in a year. 1.2 million more deaths in a year is a 2% increase. Throughout most of human history, a 2% change in the death rate would be considered normal and uneventful. The real problem is people have come to expect too much from the medical profession (who just isn't that good), their political leaders (really, what can be said that hasn't been proven already 100s of times), and life itself (no one gets out alive).

From The New York Times: One-Third of New York's Small Businesses May Be Gone Forever Small-business owners said they have exhausted federal and local assistance and see no end in sight after months of sharp revenue drops. Now, many are closing their shops and restaurants for good. https://www.nytimes.com/2020/08/03/nyregion/nyc-small-businesses-closing-coronavirus.html

This has got to stop or America will become a scared, dependent, distrustful, society, forever.

We have nothing to fear but fear itself, and fear is winning.