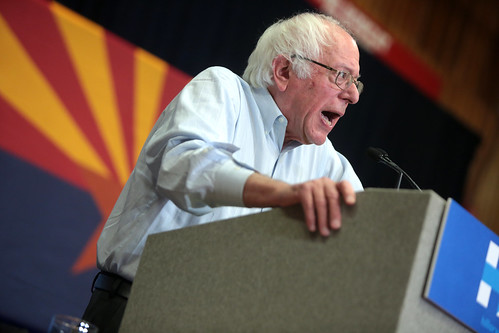 On CNN last week, morning host Poppy Harlow interviewed liberal Democratic Rep. David Cicilline of Rhode Island. Harlow aired a poll showing that socialism is now preferred over capitalism by fully 57 percent of U.S. Democrats. Then she asked Cicilline if this indicates that the Democratic Party is shifting in the direction of socialism.

Cicilline denied any such radical change. He declared all the Democratic presidential candidates besides Bernie Sanders to be capitalists, and said, "I don't see any movement in the Democratic Party towards socialism at all. I know the president is making that argument; I think it's a silly one."

It's curious that a five-term, liberal House Democrat insists that his party is still true-blue capitalist and is making no "movement toward socialism at all," even as the percentage of Democratic voters who prefer socialism over capitalism climbs up to 6 in 10.

That might seem like a paradox. It isn't. The Democratic Party is mainly about big corporate donors, who love capitalism, not its voter base, which prefers socialism.

There is something for the actual left to work with here. Think about it: Six in 10 voters aligned with the political organization that former Nixon strategist Kevin Phillips once rightly called "history's second most enthusiastic capitalist party" now say they prefer socialism over capitalism. That is a momentous development.

Now, it strikes me, is not the time to be beating up on Bernie Sanders from his radical port-side. Yes, comrades, the Democratic Party is an inherently elitist, fatally flawed vehicle for progressive change. It is a corporate and imperial institution, owned and controlled by the nation's inter-related and unelected dictatorships of money and empire.

Yes, generations of progressive and leftist activists have found out over and again that "you don't take the Democratic Party over; it takes you over." We need to build and expand real people's movements beneath and beyond the "inauthentic opposition party" (the late political scientist Sheldon Wolin's dead-on term for the dismal, dollar-drenched Democrats) and U.S. major-party election cycle, which function together as shock absorbers for potentially radical popular anger and "the graveyard of social movements."

Yes, Sanders is a fake "independent" who is maddeningly unwilling to confront the Pentagon system and the criminal Pax Americana. And yes, he isn't really a socialist. He isn't talking about workers' control of production or of the workplace (where working-age Americans spend most of their waking hours) more broadly. He isn't demanding the overdue nationalization of the nation's top, archparasitic financial institutions. He isn't calling for a general strike or a Gilets Jaunes-style rebellion of the proletariat. He hasn't joined serious ecosocialists in calling for the Green New Deal he advocates to be funded with massive, required reductions in the U.S. military budget or for the Green New Deal to be buttressed and protected by government control or takeover of the big banks so that capital can't just leave the country in response to the demand of environmentally responsible investment.

(While speaking to Cicilline last week, Harlow quoted Democratic Rep. John Delaney of Maryland on how the Democratic Party supposedly now faces a choice between Sanders' socialism and "a more just form of capitalism." Delaney is off base. In reality, Sanders is just calling for a more moral capitalism. That's what Scandinavian-style social democracy and neo-New Deal progressive populism is all about, after all. Sanders is calling for basic progressive reforms, such as single-payer health insurance, progressive taxation of the rich, free college tuition and clean-energy government jobs that are part of the broader Green New Deal. Sanders isn't lying when he repeatedly says that his demands "aren't radical." The more mainstream Democratic candidates -- well to the right of the majority progressive public opinion with which Sanders runs in policy accord -- have been forced by Sanders and their party's increasingly "socialist" base to cloak their amoral and Wall Street-captive, neoliberal-capitalist agenda in the populace-manipulating shroud of a "more just capitalism.")

Paul Street (www.paulstreet.org and paulstreet99@yahoo.com) is the author of Empire and Inequality: America and the World Since 9/11 (2004), Racial Oppression in the Global Metropolis (2007), Barack Obama and the Future of American Politics (more...)
Related Topic(s): Bernie Sanders; Bernie Sanders 2020; Capitalism; Socialism, Add Tags
Add to My Group(s)
Go To Commenting
The views expressed herein are the sole responsibility of the author and do not necessarily reflect those of this website or its editors.